Chip Kelly ran an astounding Double Triplestack play that the Redskins had seen before -- and still couldn't stop.

Of all the crazy things that happened during Chip Kelly's first game, against the Redskins, one of the craziest almost went unnoticed.

The Eagles ran a formation with only three linemen in front of the quarterback and the tackles split wide along with two receivers on each sideline. The backfield consisted of Michael Vick, in shotgun of course, and LeSean McCoy.

The crazy thing? They ran it up the middle. Even crazier? Shady gained ten yards.

It actually makes sense. If the defense is playing cover two or quarters, this formation pretty much forces the safeties over to the sidelines, which frees up the middle for a big gain.

There was a lot of preseason discussion of Chip Kelly's distinctive Double Stack play, which the Eagles ran repeatedly against the Patriots. That formation has two receivers (either WRs or tight ends) wide on each side, one on the line and one directly behind him a few yards. The new formation was similar, except that each tackle went outside to join the receivers on his side.

Insane? Yes. Unpredictable? No. Chip Kelly ran the exact same play at Oregon. In fact, Charles Fischer at FishDuck wrote an article about it last year. In that case, Stanford only got one defensive back out to cover the group of three on the right sideline. The Ducks naturally threw that way for a touchdown. Here's Fischer's screen shot (by permission): 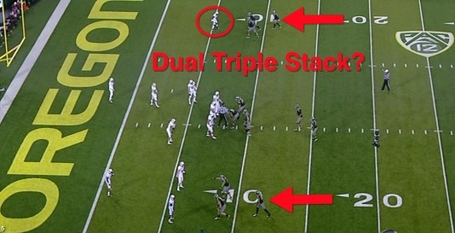 The Redskins had all summer to prepare for Chip Kelly's offense, and before the game, defensive coordinator Jim Haslett said that "We’ve looked at endless film on Oregon." Presumably he saw that play; the Ducks ran it in their biggest regular season test last year, the big showdown against the Cardinal. And to his credit, the Redskins covered the two receiver bunches. Here are the two screenshots lined up, with the Eagles' version reversed for clarity. You can see the Skins' DBs racing outside to cover. 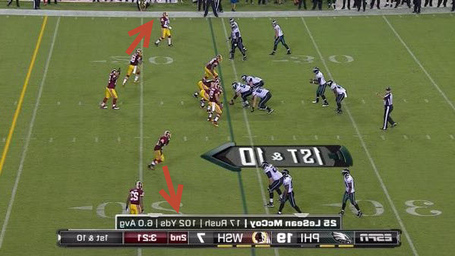 That just left the middle open for Shady. Washington is lucky that he didn't pick up more than ten yards. And that's the beauty of Chip Kelly's offense. Yes, he runs some drastic formations that -- in this case -- have probably never been run in the NFL before. But they're not trick plays, or gadgets that are easy to plan against once you've seen them.

These are classic spread offense plays that force you to make a difficult choice, and punish whichever choice you make. I'm guessing that Jim Haslett did see that play. He probably schemed it, and practiced his team against it. They saw it coming, and just couldn't stop it.

Next Up In NFL