Tight ends are becoming increasingly important in the NFL. Can the Philadelphia Eagles capitalize on the phenomenon.

By many accounts, young tight end Derek Carrier has not had a superb camp. Admittedly, it’s tough for the second year practice squadder to stand out and get the reps needed when James Casey, Brent Celek, Zach Ertz, and Clay Harbor are on the field ahead of you. But Derek, do not let that deter you. Against the Carolina Panthers, you made a great catch that made Brandon Lee Gowton swoon. Yes, there was a flag, but shake it off, big guy. Your position on the team is way more important than LeSean McCoy’s.

On the surface, this seems a ridiculous statement to make. It actually is. But it’s also meant to illustrate a point: tight ends matter. The tight end position is evolving, quickly. Tight ends used to be offensive linemen with sure hands. Then, after the freakish Tony Gonzalez entered the league (can you think of a better turning point?), that perception changed. Today, the tight end position is the most versatile in the NFL, responsible for blocking as well as an offensive tackle and running and catching as well as a wide receiver. And thanks to the New England Experiment, one of these tight end hybrids is not enough to have on the roster. Instead two or three are now necessary. But exactly how necessary? Is the tight end position really that important? Is Derek Carrier really that important?

Yes, I think so. I compiled statistics from 2009 to 2012 and used linear regression to see how, or if, tight end production correlates to the number of team wins over a season. For this purpose, I define tight end production uniquely, by multiplying together catches, yards, and touch downs (so six catches carry the same weight as one touchdown). The correlation is not strong, .139, but it is statistically significant. 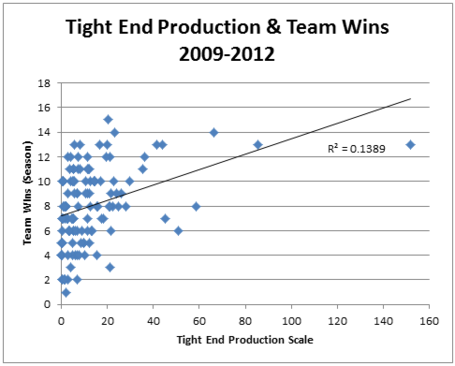 The weak correlation is both expected and surprising at the same time. First, it’s expected because, quarterback aside, can we really expect any one position on the team to have such a large impact on wins over the length of a season? I don’t think so. Second, it’s surprising because .139 seems almost too high! We’re essentially saying that 14% of team wins can be attributed to tight end production. 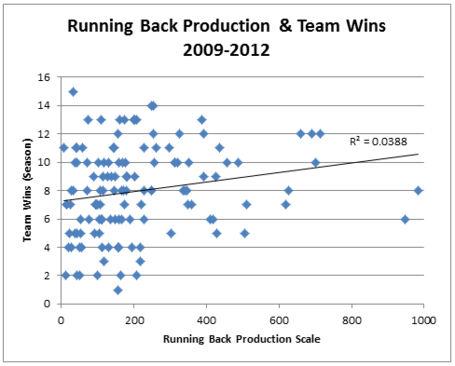 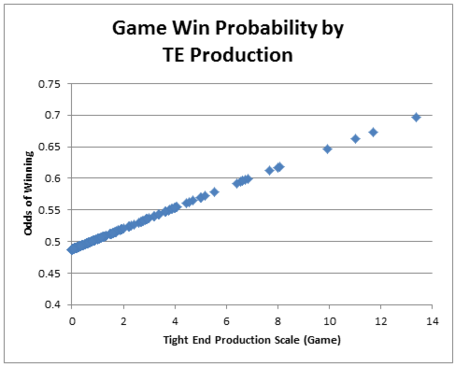 These results seem to indicate that the tight end position is indeed that important. Is it really more important than running back? Hard to say for sure. But given their new found affinity for tight ends, the Philadelphia Eagles find themselves in a unique situation. Due to Jeremy Maclin’s injury, TE Clay Harbor may see some time at wide receiver; new free agent signee James Casey can line up anywhere on the football field; and Zach Ertz is an unproven, albeit talented, rookie. If Chip Kelly truly relishes the tight end position, it’s possible that Carrier, a Division III standout with great hands and 4.4 speed, can play himself onto the roster. More likely, however, is that Kelly will keep four tight ends, and if the statistical trends hold true, those tight ends will have the opportunity to produce. Big time.