Today was the day Eagles veterans reported to the NovaCare facility. In case you missed it, the assistant coaches also spoke to the media earlier in the day.

I didn't get a whole lot of material as I was only around to see Jeremy Maclin, DeMeco Ryans, and Fletcher Cox arrive (in that order).

Here's what I noted from when they spoke. 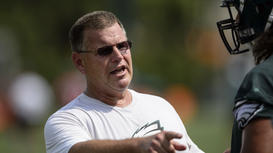 That's it for today. One theme that stood out from these quotes is that it's clear that these players are looking forward to a new season and putting past failures behind them.

Up next: Friday is when the fun begins! All players will be out on the field for practice. There's no hitting yet until Sunday, but I'll keep you updated on the events that take place tomorrow with a practice recap later in the day.