Underachieving "Mile Marker 23" and "Mile Marker 24" are no longer Eagles. In are a group of hard-nosed corners who are willing to be physical, but can they cover?

The Eagles will have a new pair of starting corners this year after the acquisitions of Nnamdi Asomugha and Dominique Rodgers-Cromartie turned out to be enormous disappointments. Lets look at each CB one-by-one:

Cary Williams: In his off time, he's a connoisseur of sconces. On the football field, he scraps:

To be determined if Williams can cover, but at the very least, he'll be a more willing tackler than "Mile Marker 23" and Mile Marker 24." 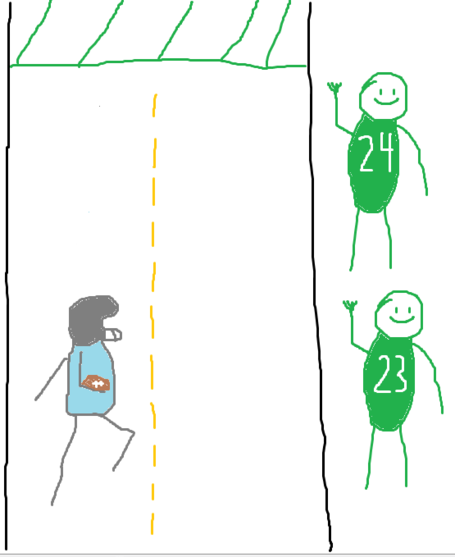 Bradley Fletcher: Fletcher hyperextended his knee his rookie season (2009). From that injury, he had multiple surgeries to fix the lateral meniscus cartilage in his knee, and to repair his ACL. He also tore the ACL in the same knee early in the 2011 season.

After the 2011 season, the Rams brought in a new coaching regime. They paid big time money to Cortland Finnegan in free agency, and spent two high picks on CBs (Janoris Jenkins at 39th overall, and Trumaine Johnson at 65th overall). That's an enormous commitment to fix one position.

In the first 9 games last year, Fletcher played 354 snaps. In the last 7, he played in every game, but only got 20 snaps. It appears he lost his nickel job to Johnson, which makes sense as the Rams were out of contention by then and likely wanted to develop the young guy.

So far in minicamp and OTAs, I like what I have seen from Fletcher, and believe he may ultimately become one of the better acquisitions this offseason.

Brandon Boykin: Boykin was probably the Eagles' best defensive back last season. He has the slot CB spot on lockdown.

Curtis Marsh: Marsh is a converted running back, who was somewhat raw coming out of college. When he was drafted in the 3rd round, he was considered something of an "upside" guy, who had the potential to be really good, but more than likely not an immediate contributor. Marsh is now entering his 3rd year in the NFL. The is the year he needs to show something, or it could be time to move on.

Jordan Poyer: I covered Poyer extensively for the Morning Call a few months ago. Spoiler.. I think he could be a steal.