The Eagles open their training camp today at the NovaCare complex. The first time they'll be in Philadelphia for camp since 1943.

For the first time since 1943, the Eagles will hold their training camp inside the city of Philadelphia. It really does represent a major shift for a team that hasn't held their camp at their own facility ever. Not once in their 80 years of existence.

As you can see below sometimes they've trained very close, but other times pretty far away.

Now they'll be at home, which is actually a trend in the league this days. As teams invest more in multi-million dollar practice facilities and stock them with state of the art equipment, it's no surprise that they want to start using them more. Back in 2000, only 16% of teams trained at home. This year almost 60% will. 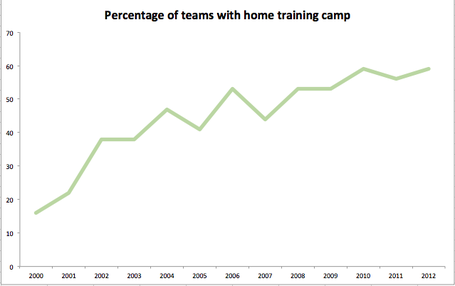 The NFC East teams seem especially in favor of being at their own digs. The Eagles will be at their NovaCare Complex, the Redskins will train at their new $10 million Bon Securs Training facility in Richmond and the Giants have abandoned Albany in favor of their Timex Performance Center in East Rutherford. The Cowboys still travel to Oxnard, California.

"I just think we have everything here so the fact that we would pack everything up and move, that didn't make sense to me," said Chip Kelly when asked about holding camp at home. "All our video stuff is here. Our servers are here. You're dealing with portable laptops and hoping you can get practice on it. You have issues when it rains up there. Where do you go? Our training facility in terms of how we want to lift (is here). Why would you move everything to go somewhere else?"

Eagles president Don Smolenski says that moving the training camp home will also give more fans the opportunity to see the team as well. While most fans won't be able to go the actual NovaCare complex, the Eagles have scheduled 5 practices across the street at Lincoln Financial Field and have offered free tickets to those.

Obviously Lehigh is a bit out of the way, so I'm not surprised that more people will go now that the practices are in Philly. Still, the experience won't be the same. Sitting in a seat at the Linc will never match what it was like to stand literally just a few feet from the players on the sidelines at Lehigh. Being able to literally hear the conversations they'd have on the sideline, snapping quick pictures, hearing the coaches coach... That is what really made Lehigh special and what made the long drive and hots days in the mountains worth it.