The Eagles' OLBs may be the unit most negatively affected by their switch from the 4-3 to the 3-4.

We may never know if the Eagles preferred Dion Jordan over Lane Johnson. Lane Johnson is a great fit for this OL, and it very well may be one of the most athletic groups ever. They have a chance to be special.

But Dion Jordan would have also been a really good fit as a player the Eagles could have moved around like a chess piece who could do everything: rush the passer, cover, and develop into a physical player against the run.

Whenever a team moves from a 4-3 to a 3-4 or vice versa, there are always going to be a few "square pegs trying to fit into a round hole." The Eagles' OLB position will likely be the one that is most negatively affected by that change. Heading into next offseason, a versatile OLB may be near the head of the wish list. Let's look at the players the Eagles do have in place:

Trent Cole: This is a crucial year for Trent Cole. Cole is scheduled to make a lot of money over the last few years of his contract (click to enlarge): 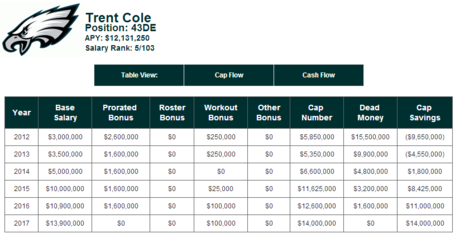 There's no chance he's going to see that money from 2015 on. Cole will turn 31 this season, and the market for aging pass rushers is not all that lucrative:

Cole had his worst season as a pro in 2012, and while I'm not writing him off this season, there is a very real possibility 2013 will be his last as an Eagle.

It will be interesting to see how the Eagles use Cole. In 3-3-5 nickel sets during OTAs, the Eagles moved Trent down as a DE. I think that's a role that could suit him well.

Brandon Graham: It's almost a shame in some ways that Jason Babin had such a productive 2011 season, since it meant that Brandon Graham rarely saw the field in 2012. In the first 10 games last season, Graham got just 180 snaps, or 18 per game. But when he got his opportunities, he produced. In the final 5 games after the Eagles cut Babin, Graham saw significantly more playing time (44.8 snaps per game), and he amassed 23 tackles, 4 sacks, and a forced fumble.

Graham has proven to some extent that he can get after the QB in this league, but with the switch to 3-4 OLB, he's going to have to drop into coverage at times. That'll be... eh... interesting?

Connor Barwin: Barwin is the most well-rounded of the Eagles' OLBs. In 2012, Barwin had just 3 sacks. That was down from 11.5 in 2012. Whenever there's such a big difference in production like that, you begin to wonder if the the stats from the good season were legit. They were. Barwin explained that part of the reason for the decline in production was because he was lining up opposite the TE in 2012, and was asked to bump the TE before getting into his pass rush. Barwin will likely draw the most coverage responsibilities among the OLBs, and you can pretty much pencil him in as a starter.

Phillip Hunt: A lot of people thought Hunt might be primed for a breakout season in 2012. It didn't happen. Hunt is (extremely) generously listed at 6'2. He has ability, but doesn't fit the whole "big people beat up little people" thing.

Everette Brown: Brown was awesome in college at Florida State. During the 2009 draft, the Carolina Panthers traded their 2010 1st round pick to the 49ers for their pick in the 2nd round (43rd overall) to select Brown. Six career sacks later, Brown is on his 4th team in the NFL.

Chris McCoy: Tommy Lawlor thinks McCoy will be backup at SAM behind Barwin, but is a longshot to make the team.

I believe the Eagles still need some depth here. Don't be surprised if they make a move for another OLB during camp.