How Your Favorite NFL Team's 90 Man Roster was Assembled

A look at how every NFL roster was assembled by year and method, with a special emphasis on the Philadelphia Eagles.

Share All sharing options for: How Your Favorite NFL Team's 90 Man Roster was Assembled

Recently I stumbled across a cool site called Pro Football Rosters that keeps track of how all 32 NFL rosters were built. Not only can you see how the players were added (trade, free agency, draft, etc.); you can also see what year they joined the team.

You can click here to see the Eagles full chart.

Let's jump into the data. Under each chart I listed some notes from the data that I found interesting.

Here's a chart of when current tenured roster players were originally acquired by their teams:

Here's a chart of the method current tenured roster players were originally acquired by their teams: 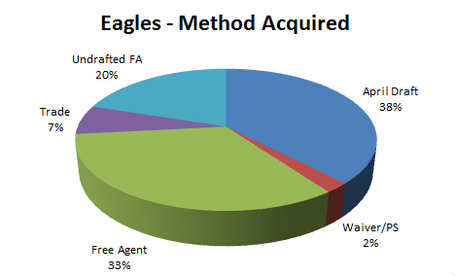 Disclaimer: As you may realize, some of these numbers (see: undrafted free agents) may be currently inflated. These numbers are likely to change once the rosters get cut down to the final 53, so I'll revisit this exercise again then. For now, it's just an interesting activity. Once again, a big thanks goes out to Pro Football Rosters for making this data easily available.