Skip to main content
Breaking News The Eagles are 10-1!

Share All sharing options for: BGN Exclusive: Eagles Q &A with Evan Mathis

Training camp is less than one week away, and the Eagles are preparing for what should be a vigorous training camp. One of those Eagles is Evan Mathis, who is coming off his second season with the team. The left guard was the only Eagles offensive lineman to start all 16 games last year and, on top of that, played well throughout the season. Mathis, who is always entertaining, took some time out from his busy offseason to answer some of my questions. The self-proclaimed "Sit-Down Comedian" discussed the new staff, the struggles of last season and even found time to ridicule my questions.

Mike Kaye: As the only starting offensive lineman to play all 16 games in 2012, what was the hardest part of having to adjust to new lineman on a sometimes-weekly basis?

Evan Mathis: "If I was to ever worry about who I was playing next to I would have been doing a disservice to myself and my team. I maintained focus and kept preparing and performing like I've always done."

MK: Since you are coming off surgery, there will be four starting offensive linemen that are all coming back from a rehab of sorts. How have Todd and "The Jasons" looked in OTAs? How are you feeling heading into training camp?

EM: "Everybody has worked very hard in their rehab and it looks like we're all back to true form."

MK: How different is the blocking scheme under Jeff Stoutland as oppose to Howard Mudd? Will we see more of an Alabama-style blocking attack, or will it be adapted for Chip Kelly's choice of quarterback?

EM: "I don't think our blocking scheme would change based on who the quarterback is. The blocking schemes from Mudd to Stoutland aren't vastly different. There are some plays we are running now that we didn't run before, but it's not like we're playing a different sport."

MK: A lot of the national media has commented that there isn't a TRUE starting quarterback battle in Philadelphia. As a member of the team that has played with both Nick Foles and Michael Vick, do you think there is a sincere competition at quarterback?

EM: "Yes, there' s a sincere competition at quarterback. May the best man win."

"YES, THERE'S A SINCERE COMPETITION AT QUARTERBACK. MAY THE BEST MAN WIN."

MK: What's it like going from blocking for Michael Vick for two seasons to blocking for Nick Foles? They obviously have contrasting styles, so how do you prepare yourself for each QB or is it really that much different?

EM: "I don't change anything. If you were a lineman, what would you change? If I was worried about who I was blocking for, I'd be losing focus on the guy I was supposed to be blocking." 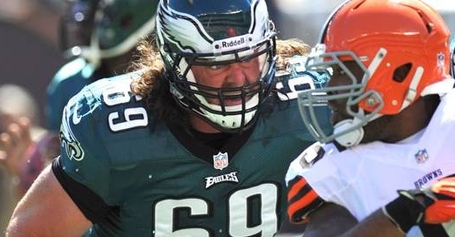 MK: Obviously the Eagles drafted Lane Johnson in the first round this offseason and are likely to move Todd inside, how have both been doing in their respective transitions, with Todd moving back to guard and Lane playing in the NFL and still learning the tackle position?

EM: "I think both will do great. Todd is the Swiss Army lineman and Lane is an intelligent, athletic specimen."

MK: Is there anyone in camp that has stuck out to you that maybe the media doesn't hype as much as they should?

EM: "Allen Barbre is, at the very least, a starting caliber offensive guard. If we were to lose a guard to injury, I'd be totally confident with him filling in."

"Allen Barbre is, at the very least, a starting caliber offensive guard."

MK: You and Todd have both played at an All-Pro level at the left guard position, so which of you will be playing right guard?

MK: How has the playlist been during Chip Kelly's OTAs? What is the most odd song he has played?

EM: "It's not about what music is being played. It's about being able to focus despite everything that's going on around you. I listen to the widest variety of music and no music is as odd as some of your questions."

MK: Overall, is there a different feel in the locker room with the new regime? Do you think some of the cuts in the offseason impacted the attitude of the locker room?

EM: "It does seem like there's fresh energy and enthusiasm. That's a credit to the team buying in to a new staff that has a done a good job of raising team morale."