The Linc - Lane Johnson for QB!

Share All sharing options for: The Linc - Lane Johnson for QB!

Only 1 Eagle makes NFL's Top 100 list, Ex-Patriot Hernandez at No. 77
The NFL Network wrapped up its Top 100 Players of 2013 series on Thursday night, and its almost complete shunning of the Philadelphia Eagles is now history. Perhaps deservedly so, after a 4-12 season that got head coach Andy Reid fired. Only one Eagles player made the list, running back LeSean McCoy at No. 45.

Iggles Blitz " Blog Archive " Bradley Fletcher
Bradley Fletcher is one of the new guys that will be starting at CB. Fletcher is a tough subject. He’s had moments in the NFL when he looked like he could be a star CB. And yet he finished 2013 as the #4 CB for the Rams.

Third man arrested in Aaron Hernandez case | Comcast SportsNet Philadelphia
Two men who authorities say were in a car with Hernandez before one of his friends was shot to death are in custody. On Friday, one was charged with illegally carrying a gun and the other accused of being an accessory after murder.

And your Donovan McNabb pointless tweet of the day. 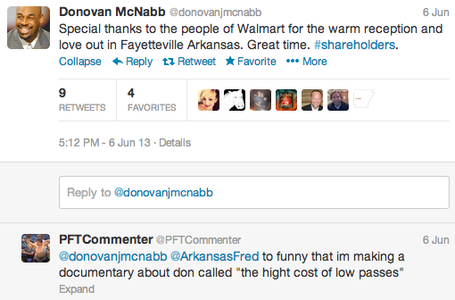