Bryce Brown's was dog seized from a breeder in alleged dogfighting case. Brown's dogs were returned, but the breeder's own dogs remain in custody. The Eagles RB has not been accused of any wrongdoing.

This is a story that might send a bit of a chill down the spine of Eagles fans. Bryce Brown's pitbull and her 7 puppies were seized as part of a suspected dog fighting ring in Wisconsin.

Brown had sent his dog, Ellis, to a pitbull breeder for stud services. When she had the puppies, Brown sent her back to the breeder to whelp and ween the puppies. It was at that point a humane officer ordered all dogs at the breeder seized after she noted that some had scarring and marks that indicated they may have been mistreated.

A judge has subsequently ordered Brown's dog and her puppies to be returned to him. The rest of the dogs seized in the operation remain in the custody of the Eau Claire County Humane Association.

Brown's lawyer argued that the puppies should be returned because he planned to sell them, which evidently becomes harder the older they get. The lawyer also brought this photo of Brown and his wife with their dogs. 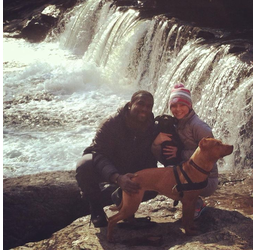 I know almost nothing about how dogfighting works, but they certainly don't look like fighting dogs to me. Do you take your fighting dogs out for family getaways?

We'll keep an eye on this story for sure, but it seems at this point that Brown and his dog may just be a victim of circumstance. He appeared to have his dogs with the breeder for legitimate reasons, but it may be that the breeder was also into other things.

It also should be mentioned that the breeder himself has not yet been charged and so far no wrongdoing has been proved. But given that Brown's dogs were returned and the breeder's are still in custody, it seems pretty clear that the breeder is the target here.