Philadelphia Eagles have stayed relatively clean on the arrest front

Share All sharing options for: Philadelphia Eagles have stayed relatively clean on the arrest front

In light of the Aaron Hernandez charges there's been an increased look at the discipline records of NFL players, which despite the increased emphasis on law & order from Roger Goodell, are still well outpacing the rest of the population. In fact, there have been 14 guys arrested just since last month. 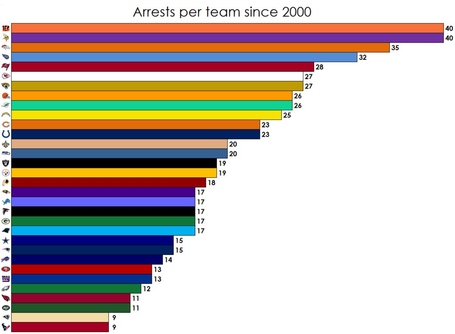 The Eagles come in at 5th from the bottom with 12 arrests. That's good in the context of the NFL, but is still about an arrest per year, which is probably more than your office sees. After all, this is a business that only employs about 60 or so people (that are counted here).

The Eagles most recent arrest was only last month when Jason Peters was picked up for allegedly drag racing and resisting arrest. It's actually the second time Peters has been arrested as an Eagle. The last time was also for resisting arrest after he was pulled over for blaring loud music.

Overall the Eagles don't have many serious incidents since 2000 and actually a few are kind of silly.

The most notable was Dhani Jones, who was arrested outside of a Miami nightclub because he refused to stop dancing. There was former safety Damon Moore who was charged for abandoning a puppy.