St. Louis Rams Terrell Brown is probably the biggest man in the NFL

Share All sharing options for: St. Louis Rams Terrell Brown is probably the biggest man in the NFL

This is completely unrelated to the Eagles, but it is an NFL story that I thought was just worth sharing. The Rams signed an undrafted kid out of Ole Miss named Terrell Brown, who was listed at an already giant 6-10, 388. However, when he got the Rams facility, they found he was actually even bigger.

"Actually, we weighed him in at 403," Rams coach Jeff Fisher told reporters Thursday. "We had him in for the tryout, and he had some issues that we had to clear up from a physical standpoint. But he got that put behind us."

According to the Sporting News, the tallest player in NFL history was former Chiefs TE Morris Stroud, who also checked in 6-10, but weighed only 255 pounds. They said it was unclear as to who the heaviest player in league history was (though NFL.com found a 448 pounder). While Brown is a longshot to make the team and actually play a snap in the NFL, if he did he'd almost certainly be the largest person to ever do so.

He mostly played defensive line in college, but the Rams are giving him a shot at right tackle.

Here's a shot from the AP shot of Brown. The guy is just giant. Crazy thing is for 400+ pounds he's really not even very fat. 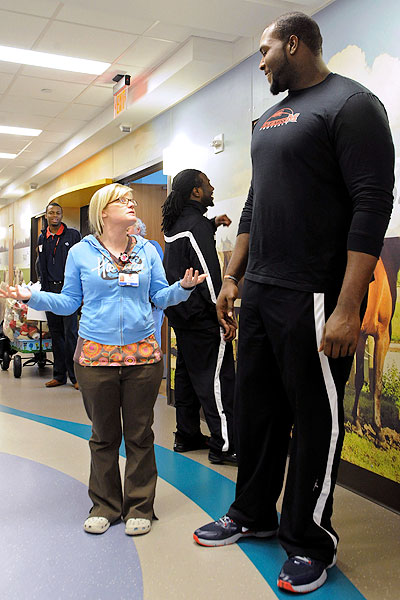