Mark this down as an installment in the "Search for SAM" series. Tristan Okpalaugo doesn't have the high profile and hype of Dion Jordan, but he's a Day 3 pick (or UDFA) who could potentially fill the same 4-3 Under SAM role for the Eagles.

*You know what I realized most from watching the Boise State game? How much I like D.J. Harper's patience, vision and overall skill set as a runner. (PS - Jay Ajayi is damn good, too.) It's something that has stood out during live viewings and was reinforced when reviewing tape. He's thought of more as an east-west runner but has downhill, power element to complement style. Happy to see Harper was able to stay healthy for all of 2012 and deliver on promise in sixth year of eligibility (twice tore ACL in left knee, once in 2009 and again after coming back in 2010). As the announcer was sure to mention multiple times, he once started over Doug Martin. Health and durability are obvious question marks, but at least you know Harper's mentally tough, and I think in terms of pure talent he's a starting-caliber NFL. Nice Day 3 pick/UDFA in this draft.

Tall, sinewy frame with long arms (can't find exact measurement**), which he uses to reach out and grab; wraps and engulfs ballcarrier in grasp, like a Venus flytrap.

**(Insane measurements from NFLPA Game, courtesy of commenter ROFLCOPTER16/@FAILCOPTER16: 10 3/8" hands, 36 5/8" arms, 83 2/8" wingspan. Um, holy shit. For comparison's sake, D.J. Fluker has 36 3/8" arms and 87" wingspan, both longest at the Senior Bowl, measurements which had everyone in shock and drooling. Okpalaugo's arm length is literally unmatched and defines the word "rare." Yeah, he's a physical super-duper-freak.)

Arm length constantly shows up and enables him to make plays other than just tackling (pushing blocker backwards, getting hands in QB's face, etc.)

Long enough to keep blockers at arms-length and set edge, keeps moving laterally and fighting through block to make tackle/tackle-for-loss or allow teammate to come in and clean up.

Should have room to put on weight/bulk without producing adverse effect on rest of game; projectable talent, developmental player with unique positional value and upside.

Versatile, lines up all over the front-7, can rush standing up and with hand on the ground

Has really good timing, get-off quickness in anticipating the snap and exploding into backfield to blow up play as it starts (i.e. very first play of the 2012 game vs. Tulsa, 1Q, 14:55; then again at 2Q, 13:42 on run play designed to go left but Okpalaugo forced it back inside).

Flashes plus instinct-reaction plays -- as in, how does his body naturally react to a stimulus?
- 2012 vs. Oregon, 2Q, 14:11: Mariotta steps sideways to elude Okpalaugo coming in free, latter has hands up anticipating pass but instinctively reaches out to grab QB by shoulder-pads and swings him down with basically one hand.
- 2012 vs. Tulsa, 3Q, 12:40: Sags back slightly and jumps with arms in the air as QB releases pass, then actually catches the ball when thrown to him. Think how many times a DL/LB drops that sure INT right in their hands, made even worse when it will be easily returned for a touchdown. Okpalaugo makes the INT and returns for TD.

Flashes plus instinct-reaction plays. Impressive and well-coordinated athlete for his size.

Definitely an impressive and well-coordinated athlete for his size; as mentioned before, shows instinctive combination of movements in succession (i.e. from highlight video, 2011 vs. Idaho, 3Q, 2:48: jumping over blocker and tackling/sacking QB while landing).

Has closing burst, long strides eat up ground in a hurry.

Converts speed to power off the edge.

High football IQ, typically astute when it comes to deciphering fakes and not biting.

Shows ability to recover to make play even after misstep.

Talented pass rusher who's not only get-off/quickness -- surprised me with variety of attacking and counter moves shown to beat blocks; proclivity for extending arms and ripping or swimming, sometimes combined with shuffling feet and shooting back inside or going around blocker outside.

Doesn't give up on first contact as pass rusher, keeps attacking with repertoire of moves

Fluid mover, was able to open hips and change directions seamlessly while transitioning to backpedal and then running with receiver in coverage (i.e. vs. Oregon, 3Q, 7:39).

Was dropped into coverage, primarily in zone, and looked fine operating in space when charged with doing so.

Explosive leaper, and it's an aspect of his game employed frequently. 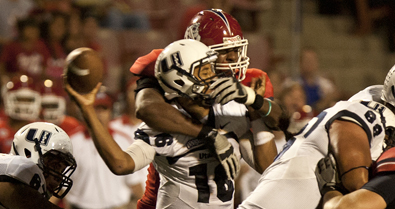 Height does present some leverage difficulties when attacking and taking on offensive tackles.

Will get stonewalled and shoved back if initial punch doesn't jolt blocker off balance (saw this a couple times vs. Boise State).

Not really a bendy pass rusher.

More of a leggy runner with some herky-jerky, almost stiff movements.

Despite closing burst, raw speed never stood out to me and seemed just okay at best; reportedly ran in 4.74-4.78 range at pro day, which makes sense as I would've guessed ~4.8 based on tape.

Just how good is he in coverage? Limited exposure in this regard; would have liked to see more man-coverage, especially matchups vs. TE, but did not appear on tape.

Has something of a spindly build and can look awkward at times, but I don't think that should be confused with laboring or clumsiness since he has big-time athletic flashes.

Struggles with short area quickness, which was verified according to reports and test numbers (7.42 3-cone) from pro day; can cause him to seemingly be split second late in reacting even after diagnosing play correctly.

When combined with his size and build, short area quickness struggles can lead to poor balance in space, lunging and missing out on plays he's otherwise in position to make (i.e. vs. Boise State, 3Q, 2:05: Misses tackle on RB after minor overpursue inside and losing outside position).

Inconsistent tackling technique. Too much grab and drag and reliance on arm tackling/using expansive wingspan to corral ballcarrier; think this is byproduct of being so used to getting by with his Venus flytrap tackle move.

More than a few everything-but-the-finish plays against both Oregon (i.e. 2Q, 2:32, 3rd & 7***) and Tulsa (i.e. 2Q, 6:40, 4th and 1: chance to make tackle behind the LOS but a split second late and just misses RB; 3Q, 12:27: explodes into backfield but doesn't set good base and just flat misses tackle, lucky that teammate cleaned up and made tackle right after).

***Gets tackle off balance and wins with great hand use (actually it's just his right arm/hand with a jab-jab-push aside), then attempts to jump on Mariota but misses tackle; QB escapes and dumps off pass to WR who runs for first down.

Tools to work with, no doubt. Showed ability to play standing up and with hand in the ground, could profile as a potential SAM suited for 4-3 Under with ability to stay on the field in multiple fronts and present schematic versatility. If 2012 Oregon tape could just be put on a loop, you see special traits show up over and over. I'm sure Chip Kelly remembers Okpalaugo's performance in that game.

I see a lot of similar Dion Jordan-esque qualities, but feel Okpalaugo's more physical at the line.

Uniqueness, upside and versatility presents tremendous value as a Day 3 prospect or perhaps even UDFA. Long arms and explosive leaping ability should make him candidate to immediately play on FG and punt block units.

I see a lot of similar Dion Jordan-esque qualities, but feel Okpalaugo's more physical at the line. He's not the unprecedented athlete (nobody is) -- though I'm comfortable putting him a tier below, which is a compliment and rare unto itself given his size -- and doesn't have same extensive experience in coverage. I'll settle on labeling Okpalaugo a poor man's Dion Jordan, but with more developed pass rush ability and less pure coverage skills.

****Fresno State note: Jr. LB Patrick Su'a (#30) had more than a few instances of popping up on tape and making plays. Will be a prospect I remember for 2013 (Edit: Courtesy of commenter ROFLCOPTER16/@FAILCOPTER16, once again, Su'a tore ACL mid-season.) 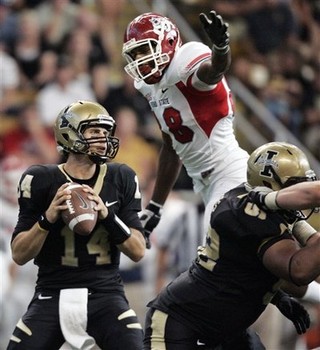 Bio:
Link: http://www.gobulldogs.com/sports/m-footbl/mtt/okpalaugo_tristan00.html
DOB: October 10, 1989
Hometown: Livermore, CA (HS: Granada -- Where Okpalaugo was WR/TE in addition to DE, played basketball and was prolific track and field athlete who starred in, you guessed it, the high- and triple-jump).
Major: Criminology
Former walk-on who earned scholarship in 2011
Suspended for first half of 2011 Idaho game for kicking opponent in previous week's game vs. North Dakota (http://espn.go.com/college-football/story/_/id/6998628/fresno-state-tristan-okpalaugo-suspended-one-half-wac)