Reading into the 2013 NFL Draft: Is Chip Kelly About to Revolutionize the NFL?

With minicamp still a few weeks away, why not have some harmless fun and speculate on what Kelly's first draft means for the Eagles?

Share All sharing options for: Reading into the 2013 NFL Draft: Is Chip Kelly About to Revolutionize the NFL?

With the 2013 NFL Draft in the books, the fallout begins. Experts churn out draft grades, drafted players begin to get acclimated with their new teams, and news focus begins to shift from the draft itself to the coaches' and front offices' takes on their new players.

Kelly, while a better personality for the media than Reid was, has been rather vague with his plans to reporters. Since he was hired, he's been fielding multiple variations on the same set of questions: "What do you want to do on offense? What are you looking for in a quarterback? What will your scheme look like?" His answers have been rather consistent: "Score points. A guy who can get us into the endzone. It will depend on personnel."

But, when talking about newly drafted tight end Zach Ertz, he got a little more specific with his plans. He spoke about three tight end sets in the offense and how the play they run will depend on defensive substitutions. For reference, here's the entire quote:

"Yeah. I go like that," he said, holding up three fingers, "and three tight ends go into the game. Now, if [the opponents] go three linebackers, we split [the tight ends] out, we throw passes. If they go three DBs, we smash you [with the run]. So pick your poison."

This is how Kelly explained Zach Ertz in his offense: in relation to a single play. Not a system or a scheme. Just within the context of a play. So, maybe a more relevant question to Chip should be: "Will you even have a system?"

Chip Kelly has been hailed as an "innovator" and a "mad genius." But it might go deeper than that. That quote above, combined with his insistence on leaving his offense undefined, may suggest that Kelly goes completely against the grain of traditional football philosophy by viewing the game on the microscopic scale.

Kelly goes completely against the grain of traditional football philosophy by viewing the game on the microscopic scale.

Traditionally, coaches view football on the macroscopic scale. They have a preferred football ideology that dominates everything they see in the game: the type of players they want, the plays in their playbook, their game management, everything. The general philosophy they run forms a foundation on which they build their team, and it eventually works its way down to the plays on the field.

Chip has given hints that he does not follow this conventional view of football. Rather, he sees it as a collection of plays executed in a sixty-minute game period. The foundation of the offense is then centered around maximizing the amount of positive plays instead of choosing a philosophy you believe will consistently yield positive results. This unorthodox method of approaching football cuts out the middleman of a base "system" and focuses entirely on the end goal. 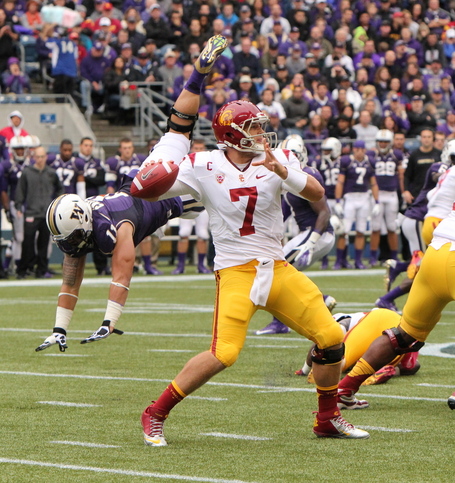 Kelly's utter refusal to adhere to "one type" of any player may be indicative of this line of thought, and this is highlighted by his coveting of Matt Barkley over other, more athletic quarterbacks available at that point in the draft. By prioritizing versatility in personnel over the system, Chip is reducing football to basic math. The more plays you can run out of a single offensive package, the less able the defense will be in identifying which play you are running at any given snap. What makes this strategy truly incredible is that the players in the set are creating an impact in the game simply by their presence on the field and in the huddle because their versatility increases the number of plays that can be run. This also has the added bonus of working like the "inverse" of the no-huddle: instead of trying to prevent the defense from substituting, the offense allows the defense to substitute and adjusts the play accordingly. This methodology becomes even more potent when you do prevent substitution by using a no-huddle offense.

Chip Kelly will revolutionize the game of football, much like Bill Walsh did with the West Coast Offense.

The stipulation with all of this is that it puts extra emphasis on pre-snap reads and judgments. If the focus is getting a positive outcome on each play, then dissecting the defensive front to figure out the best way to do that before the play clock runs out is critical. This could possibly remove Michael Vick from the quarterback race down the road as he has shown signs of struggling with pre-snap reads in the past.

Of course, this is all speculation. I am not Chip Kelly, so while I can try and surmise what he is thinking based upon available information, I obviously don't know. But if he does see football as a play-by-play sport and is successful in fielding a versatile offense that can adjust to almost any defensive front, then Chip will do more than be an excellent head coach. He will revolutionize the game of football, much like Bill Walsh did with the West Coast Offense. The league will spend years playing catch-up to what Kelly will bring to the table, and there will be a massive shift in the way teams are built and the way games are played. Or, Kelly could just be another great college head coach to fall flat in the NFL. It is truly 50-50 at this point.

Only time will tell exactly what Kelly wants to do and how successful he will be. But until then, there will be theories, and this is just one of them. As an Eagles fan who wants to see the team return to glory in the near future, I really don't care what Kelly actually does as long as it works. But what say you? What were your takeaways from the 2013 Draft?