He's got a body like Randy Moss and roams the deep half like Ed Reed. His name is Dexter McCoil, he's 6'4", 224 pounds and recorded 18 INT over his four-year college career at Tulsa (17 INT in last three seasons). Written in honor of GGeagle/John G, sort of.

I first mentioned Tulsa's Dexter ("McPoyle") McCoil in a post back in December, as, of course, it was his height for the safety position that caught my eye while doing research. Then one of BGN's all-time beloved posters, the dearly departed GGeagle/John G/other alias, made sure everyone knew McCoil was one of his favorite prospects in the entire draft. So here's to you, GGeagle/John G/other alias, wherever you are (he's migrated and has effectively taken over the "Eagles 24/7" site's comments section). For real, though, I like McCoil a lot as a Day 3 pick. There's considerable upside with him. 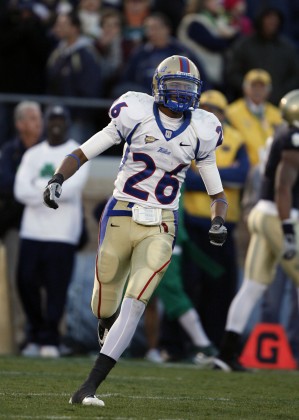 Pretty incredible range due to long strides, height and length.

Dangerous roamer on the backend, always seems to be around the ball.

Has a certain swagger to him on the field, which I like.

Shows off leaping ability, but it's really all about his length more so than explosion/actual vertical jump.

Willing to come up and support against the run, not afraid to stick his nose in there to tackle ball carrier or disrupt blocking setup.

More physical than you'd think just by looking at him and, though not necessarily a natural against the run, he was better than I anticipated coming down toward LOS and attacking; he does sift through traffic well to find ball carrier and fill holes (i.e. vs. Central Florida, 1Q, 2:51, 1st & 10)

Follows and shadows the play very well, cognizant to cut off the angle to sideline for ball carrier and force him back inside to where there's help for the tackle (i.e. vs. BYU: 2Q, 11:31, 2nd & 4).

Not content to watch the pile, helps finish the tackle and get ball carrier on the ground.

Doesn't give up on plays, shows good pursuit.

Plays on punt coverage unit; length allows him to play on the FG block unit as outside rusher. 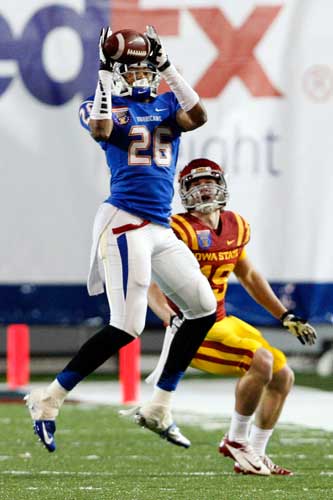 Doesn't always appear to play at full speed; don't think it's a motor issue, but something that bothered me on tape.

Didn't jump off the screen as an explosive athlete (I'd say he's solid), at least not in a way that made me say "wow"; movements seem deliberate, not real sudden.

Looks like a string bean. Doesn't always appear to play at full speed. Didn't jump off the screen as an explosive athlete.

Not especially fast, more of a glider with minimal initial acceleration.

Even if instincts are correct in coverage, doesn't always take proper angle and can allow both completion and YAC (i.e. vs Central Florida, 1Q, 4:18, 1st & 10).

Inconsistent tackler. Has flashes of proper, strong, solo technique but overall not powerful, intimidating or especially reliable; ball carriers able to break free from grasp; more of an ankle diver who goes low, tries to wrap up legs/ankles and then wait for the calvary, or deliver a blow with just his arms/shoulders/upper body force instead of attempting to form tackle and wrap up (very hit or miss here); ball carrier pretty much always able to fall forward.

Doesn't attempt to take on and shed blocks, instead launches like a torpedo and goes low in attempt to blow up the block altogether (again, a very hit or miss tactic).

Aggressiveness in coverage is double-edged sword; if he makes the wrong read and gets sucked in, doesn't have necessary speed to recover -- will get burned, badly (vs. Iowa State, 1Q, 3:59, 2nd & 3, results in a 69-yard TD catch-and-run; although it's possible TE might not have been his original responsibility, him biting on the fake handoff on the end-around leaves his coverage quadrant of the field vacant). 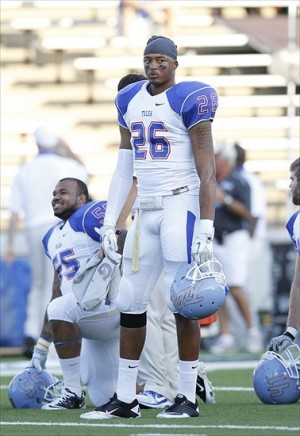 Dexter McCoil is a unique prospect for the safety position in terms of height/length, and the natural coverage instincts make him that much more intriguing. He's a savvy player who thinks the game well and always puts himself in position to make plays. Doesn't take on blocks, but his ability to flow to the action and find holes to fill makes him better in run support than I thought going into the evaluation; willing to play physically and not a total liability. I don't see him being a consistent physical force in the NFL, though I bet he'll flash this aspect of his game from time to time. Probably don't want McCoil one-on-one against receivers often, but he excels in the deep half and as a help defender in coverage. There will be times where the risks he takes in coverage result in big plays against, but it's something you'll have to learn to live with for when those risks pay off wonderfully. He will need to put on muscle/bulk and get stronger, but that should be doable with his frame (put on 50 pounds over course of freshman to senior seasons). A legitimate playmaker with 18 career INT (17 in the past three seasons), McCoil will truly find his niche in the NFL as an adept centerfielder (and therefore FS) in the Ed Reed mold due to his instincts, range, length and ball skills. Should play on special teams immediately with upside to develop into a starter.