Should the Philadelphia Eagles draft an Offensive Tackle at 4?

The Eagles may be in position to draft one of the premier Tackles in the 2013 NFL Draft. Should they take advantage of that opportunity?

Share All sharing options for: Should the Philadelphia Eagles draft an Offensive Tackle at 4?

It's no secret the 2012 Eagles offensive line was horrendous. Injuries marred the projected starting line up. The Eagles lost not only their best OL but one of their best overall players for the season when Jason Peters tore his Achilles.

As of right now, the Eagles starting OL projects to be:

On paper, that doesn't seem like a terrible line up.

Peters is an amazing LT when healthy. It's fair to wonder how his recent injuries will affect his play. It's also fair to wonder how much longer he can play at a high level as he ages (currently 31). Mathis is a stud at LG. Kelce is young and should be fine but I wonder if the Eagles might challenge him with a late round addition at C. Watkins is a concern because he hasn't proved himself as a pass blocker and he's a major question mark. At the least, Herremans is definitely an above average starter at RT.

With the 2013 NFL Draft approaching some have speculated and suggested the Eagles need to add a T. This move would give the Eagles insurance going forward if there is an injury at either Tackle spot. The drafted Tackle would also be the ideal heir apparent to LT once Peters is gone. It would also allow for the Eagles to shift former LG Todd Herremans inside to RG. Herremans is an upgrade over Watkins at RG. The rookie T could then take over at RT. But how much of an upgrade would the rookie RT be over Todd Herremans? 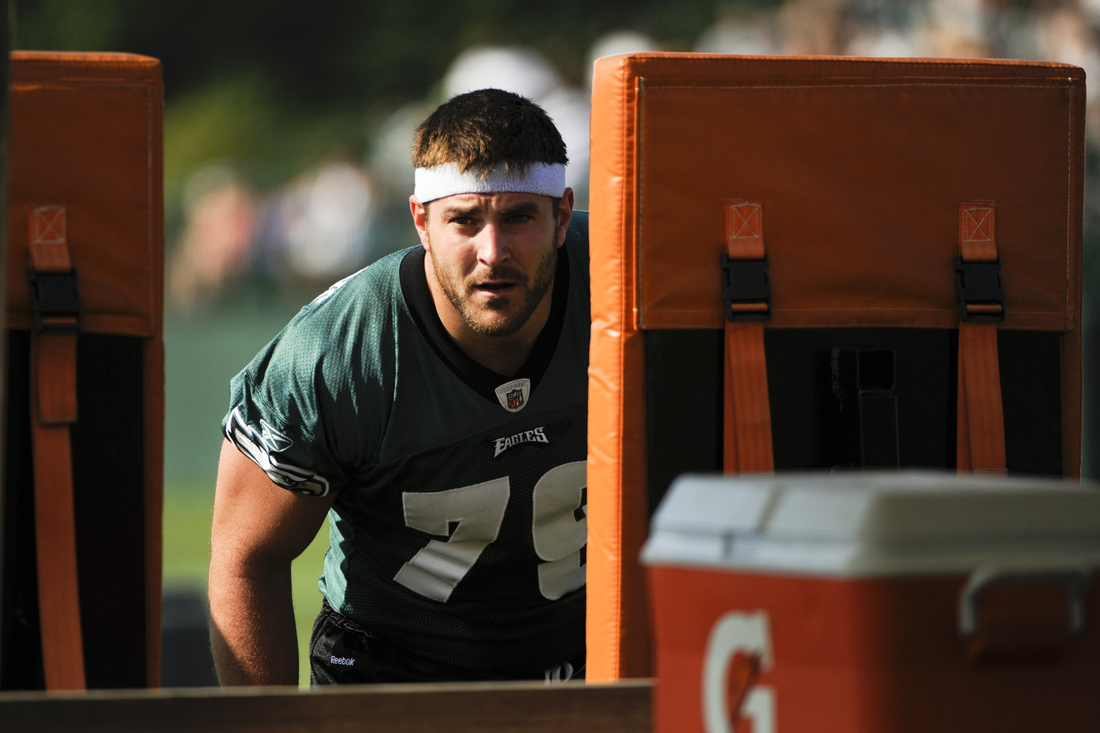 Based on that information, then, it seems that drafting an OT at 4 and placing him at RT would only be a marginal upgrade. And let's not forget that's assuming the best case scenario. There's no guarantee the rookie OT would immediately play at a high level. Herremans has a longer track record of success and is more of a sure thing (as much of a "sure thing" exists in the NFL) at RT. PFF data also indicates that he's better at T than G.

Then there's the fact that RT isn't a valuable position. Just look at the free agency RT market. Andre Smith, Tyson Clabo, and Eric Winston are all still without jobs with only a week left before the NFL Draft. Each of these players may have their own individual concerns (Andre Smith's work ethic, Eric Winston's age, Tyson Clabo was cut by the Falcons) but they're talented players. It's not a lack of talent either. They were each a top 10 RT in the 2012 season. It's evident that teams don't want to hand over big money to them, and partially because they don't value the position.

So why draft an OT that's going to possibly play at RT for 2 years, if not longer? That doesn't seem like the ideal expected value from your number 4 overall pick.

There's also the question of how much a LT is worth.

ESPN recently put up an article questioning the value of LT.

Here's what stood out:

For decades, old-school thinkers like Parcells and former Colts president Bill Polian considered quarterback, left tackle and pass rusher to be the "holy trinity" of team building. Now the argument can be made that the correlation between victories and elite left tackles no longer exists. "When coaches talk about position hierarchy, left tackle isn't among the top few anymore," an AFC team exec says. "Now it's QB, pass rusher, cornerback, wide receiver. A guy like Joe Thomas shows that a great left tackle isn't nearly sufficient." Nor is he necessary. After all, Eli Manning won two Super Bowl MVPs with former fifth-round pick and converted guard David Diehl protecting his backside. Aaron Rodgers sets up behind fifth-round pick Marshall Newhouse. And who can name Tom Brady's left tackle? How about Peyton Manning's? Considering that those two legendary QBs had the quickest releases in the league last season -- 3.03 and 3.04 seconds, compared with the league average of 3.46 -- do the names really matter? Linemen simply don't have to hold their blocks as long as they used to.

There are some valid points in this quote. The first thing that stands out is that there might be a misconception about how much a LT is worth. Some say that LT is a cornerstone position. Why is that, though? How has that proved to be true? The article goes on to bring examples of teams that had success with lesser LTs. It also questions how much of an impact a great LT like Joe Thomas has had on his team. The Browns were bad before they drafted Thomas and now they still are. There's other things that factor into their failures, and the most critical element is that they're missing a good franchise QB. It's still apparent that even a good LT like Thomas has had little impact on the team's overall success.

It doesn't stop with Thomas. What has Tyron Smith done for the Cowboys? Jason Smith for the Rams? Eugene Monroe for the Jaguars? Once again, it's not a question of good these players are. Some of them are very good. It's just a question of their value and impact.

Release time is something to consider when assessing the value of a LT. The better QBs in the league are great at getting the ball out quick. The Eagles have QBs (especially Vick) who haven't been great in that area, but the answer is not to draft a LT to condone that type of behavior. The answer is to get the ball out quicker and if it can't be done with that QB, then get a new QB.

The correlation of LT quality and QB play is something the great Greg Cosell of NFL films discussed recently.

Is there a correlation between the quarterback position and the left tackle position? Can the argument be made that left tackle decreases in relative importance the better the quarterback, and is therefore less of a priority? Last season, Marshall Newhouse, a fifth-round pick in 2010, started 10 games at left tackle for the Packers. He struggled individually much of the season. It had little impact on Rodgers’ efficiency, or the overall performance of Green Bay’s offense.

Cosell not only questions the impact of an LT, but goes on to discuss how a great QB can make up for deficiencies in LT play.

It’s often the case that the quarterback takes care of the impact pass rusher with his advanced abilities both pre- and post-snap. Of course, nothing is 100 percent, so there’s always going to be games and specific situations in which poor left tackle play derails an offense, no matter how good the quarterback. We’re dealing in tendency and probability, trying to assign quantitative value to a position that has long been regarded as a premium NFL position, and thus been drafted accordingly. The bottom line question is this: If you have an elite quarterback, does left tackle diminish in value?

The Eagles certainly don't have an elite QB (as far as we know). Does it then make LT a more valuable position for them? According to this theory, possibly, yes. However, having a good QB is quintessential to sustaining success in this league. Again, don't focus on addressing secondary problems (OT) and instead focus on improving the primary one (QB).

In the end, the importance of protecting the quarterback hasn't diminished; it's just that the responsibility and rewards are now more evenly distributed across all five O-linemen. "It used to be you found a great left tackle and built the rest of it from there," [Phil] Savage says. "Now, because of defenses, you'd better be solid across the entire line. Instead of the super-elite left tackle, it's about five men who block well in a system. You could write a whole book about how the spread offense has impacted the NFL game."

This quote from the ESPN piece is important to keep in perspective. I'm not trying to say that OT (and especially LT) are worthless positions. All I'm saying is that they may not be as valuable as we have previously thought.

Judging from all I've said in this article you might think I'm totally opposed to the Eagles taking an OT at 4. That's not entirely true. If the Eagles feel that OT is the best player on the board at 4 and that said player will be valuable to them... fine. Offense is more important than defense in the NFL, especially since QBs play on that side of the ball. OTs also have a low "bust rate", meaning the player selected is likely to be a good player. Recently, Mike Kaye talked about how stability is needed at the position. Some of the top OTs the Eagles could pick from were highlighted in our "Pound the Table" series, including: Luke Joeckel, Eric Fisher, and Lane Johnson.

Drafting an OT does allow them to have insurance at LT for now and years to come. The combination of Watkins/Herremans at RG/RT is likely worse than the combo of Herremans/[draft pick] at RG/RT. Drafting an OT at 4 would not be the worst option for the Eagles. Better options, in terms of value, might be taking a pass rusher (just for example: Dion Jordan, Ezekial Ansah, Barkevious Mingo, etc.) or even a pass defender (for ex: Dee Milliner, Xavier Rhodes)

The Chip Kelly era is underway and his first draft will be critical to lay the foundation of this team, his team, for years to come. Is an OT really a foundational player?

Ultimately, I don't think there's a right or wrong answer to whether the Eagles should draft an OT at 4. There's a lot of factors in play and everyone, from fans to professional scouts, is bound to have their own opinion.

A quick summary on my stance:

What I'm NOT saying:

(H/T to @Slap_Bet for bringing up this debate on Twitter.)