You could make a very strong argument that the Eagles biggest hole entering free agency is the secondary. In fact, it may be that there's not one reliable NFL starter back there at this point. That's especially true when you figure that Dominique Rodgers-Cromartie is a free agent and Nnamdi Asomugha is maybe hours from being released.

The good news is, that it's a pretty good year to be in need of secondary players as the pool of vets is rather large and getting bigger.

The Panthers announced today that they've released CB Chris Gamble, who ended last year on IR, but in in 2011 QBs completed just 46% of their passes thrown at him and had a passer rating of 53.3. By comparison, QBs had a rating of 120.6 throwing at Nnamdi Asomugha last year.

On the safety front, the Jaguars announced the release of S Dawan Landry today. He just turned 30 in December and has started the past 2 seasons for the Jags after coming over in free agency from the Ravens. 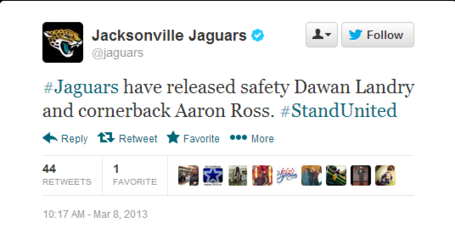