Be Thankful for Jerry Jones, not Tony Romo

Have no fear, Jerry's here!

Share All sharing options for: Be Thankful for Jerry Jones, not Tony Romo

A lot of skepticism has emerged in response to Tony Romo's 6-year, $108 million contract extension ($55M guaranteed) with the Cowboys. Romo's deal is questioned by some who point to the fact he only has 1 playoff win in his career. More questions arose when compared to Super Bowl winning QB Joe Flacco, who also recently signed a lucrative contract extension. Even Donovan McNabb found the time to weigh in on the news:

Tony Romo 6 yr 55 million dollar extension. Wow really, with one playoff win. You got to be kidding me

Some Eagles (and Giants/Redskins) fans reacted to the Romo deal with glee. I don't fully understand this reaction. If you want to make fun of how the deal might hurt the Cowboys in the future, or how they "overpaid", fine. I think his deal is a fair amount for a QB of his caliber, especially based on the market and the value QBs have to teams. And what else were the Cowboys going to do? There weren't even any realistic replacement options... unless they were OK with settling for a much worse QB.

I totally get all the "he's a choker" and "he's not clutch" jokes. We're Eagles fans. We hate the Cowboys. It's only natural to make fun of their players, but let's not kid ourselves here. Although I hate to admit it, Romo is a good QB. As Football Outsiders points out, he's been in the top 11 for quarterback DVOA every single year he's been in the NFL. His career numbers against the Eagles are 8 wins, 6 losses (the only NFC East team he has a winning record against), 61% completion percentage, 2058 yards, and 16 TD to 11 INT. His career totals include a 65.9 completion percentage, 9087 yards, 59 TD, 29 INT, and a 95.8 QB rating. He certainly keeps the Cowboys competitive.

Of course, he's not without his shortcomings... namely the failure to win big games (revisit: 1 playoff win), but he's put up some pretty darn good numbers over his career. This isn't anything new. There have been many arguments defending Romo's prowess as one of the better NFL QBs. BGN's favorite hack alumnus Jimmy Kempski highlights Romo's value when he discusses how Romo essentially carried the 2012 Cowboys on his back.

There's a big reason not to fear Tony Romo... and that's because Jerry Jones is still the Cowboys GM. -Brandon Lee

While Romo's numbers are stellar and indicative that he's a great QB, there's a big reason not to fear him. Oddly enough, that reason has nothing to do with Romo himself. It does have everything to do with the Cowboys Owner and General Manager Jerry Jones.

Jones is a large reason why the Cowboys haven't been able to achieve much recent success despite having such a good QB. His inability to build a successful roster around Romo is apparent. Courtesy of Jimmy (yet again), you can see how terrible of a job Jones has done constructing a competent offensive line.

For another look at the ineptitude of Jerry Jones, let's peek at at the Cowboys 2009 draft. (Courtesy of Blogging the Beast) 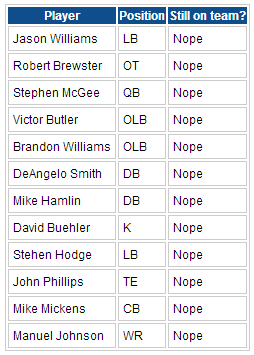 Credit where it's due: Jones did make a good move by extending Romo's contract. I'll be the first to admit I'm jealous that the Cowboys have a franchise QB. The Eagles don't have one and it's very possible that they could be entering the 2013 season with the 4th best starting QB in the division. That's certainly not an ideal situation.

If Jones finds a way to find the right surrounding cast, the Cowboys could easily be a scary team with Romo at the helm. However, if Jones continues to fail to build a team around their franchise QB, the Eagles don't have much reason to fear the Cowboys as a serious threat.

So instead of being thankful that Romo is returning (because you think he's not any good), extend your gratitude to the man who has other men clean his glasses for him and is responsible for holding the Cowboys back.