Despite signing two free agents in Bradley Fletcher and Cary Williams, with Curtis Marsh and Brandon Boykin also on the depth chart, most would agree that CB is still a position the Eagles must address in the draft. Rashaan Melvin fits the bill as an intriguing mid-to-late round prospect.

Rashaan Melvin's name isn't one of the more well-known or sexier at the CB position in this draft class, but he represents excellent value in the mid-to-late rounds as a prospect with the ideal physical traits, football IQ and overall skill set that, in combination, signify major upside. And for the sake of history, if Melvin is picked somewhere between 1 and 254, he'll be the first Northern Illinois DB, period, to ever be selected in the NFL Draft. On to the scouting report...

Love his football IQ, smart player who exhibits keen awareness, play recognition, read/react ability, and remains disciplined (i.e. 2011 GoDaddy.com Bowl vs. Arkansas State, 3Q, 0:15, 3rd & 7: Ark St tries to set up screen to the right by sending man in motion out of backfield to the left and having QB fake the throw to him. Melvin sees blockers and RB releasing, freezes, recognizes screen, comes off his man while taking split second to peak into backfield. Poor throw by the QB, but tremendous play by Melvin to dive in front of RB and pluck ball for INT just before it hits the ground.)

Decisive, trusts instincts, not afraid to gamble and undercut coverage

Excels in zone coverage --> subtext: adept at coming off his man to make plays (does this a lot as a tackler to prevent YAC)

Attacks downfield, flashes potential as a blitzer and disrupter in backfield (i.e. 1.5 TFL vs. Florida State in Orange Bowl)

Solid tackler who exhibits proper form and is able to wrestle ball carrier down individually (numerous examples throughout 2011 GoDaddy.com Bowl)

Playmaker mentality as tackler/hitter: sets under control, squares, leans forward and explodes into ball carrier, targeting the football with helmet --> smart, opportunistic, has forced fumbles doing this (i.e. vs Florida State in Orange Bowl, 1Q, 9:01, 3rd & 1: First, doesn't bite hard on play-fake, is able to recover and pick up receiver running down the middle; Manuel dumps off pass to wide open TE #35 who runs ~15 yards before encountering Melvin, who'd come off his man and was squaring up to take on #35 in open field -- Melvin targets football with helmet and spears forward, connects, forces fumble, NIU recovers)

Good in pursuit, cuts off angle and squeezes ball carrier to sideline

Gets head around in coverage, plays ball in the air well, great in jump ball situations where he can use length/leaping ability/toughness to disrupt WR

Impressive body control, especially while in the air

Showed off natural hands while accumulating 5 total INT in 2010-2011; highlights show high-pointing ball and cleanly snatching it out of the air

Provides utility on special teams, especially FG block unit -- speed, flexibility around the edge and long arms make him dangerous in this capacity 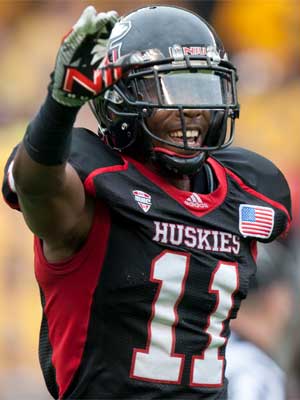 Can he handle press man? Has length to try but plays primarily off coverage in scheme instead

Inconsistent in backpedal at times, gets upright instead of "sitting"

While Melvin can open hips and change direction when moving forward, he appears to struggle with short area quickness and fluidity of motion when he has to open hips, retreat and recover, which is supported by 7.32 3-cone drill time during pro day

Appears to struggle with short area quickness and fluidity of motion

Deeper routes, especially those that break outside toward sideline, give him trouble. Quick twitch, balance and explosion coming out of breaks look like question marks. WR, even those who aren't necessarily quick, able to get separation.

Got burned by double moves

Will miss tackles when not attacking downhill -- happens after giving up completion and then trying to tackle ball carrier in space within split second (i.e. vs Florida State in Orange Bowl, 2Q, 11:20, 1st & 10)

Has "everything but the finish" plays where he shows a succession of pro-worthy skills... but, say, drops the interception (i.e. 2012 vs. Central Michigan, 2Q, 6:00: Physical, sticky coverage on WR all the way down the field, keeps head on a swivel and turns around to locate while cutting in front of WR in endzone, but lets ball slip through his hands)

Sometimes, when undercutting coverage, misjudges/misplays angle or mistimes jump, resulting in the ball narrowly eluding his outstretched fingertips for completion/could-have-been-completion (two examples: 2012 vs. Central Michigan, 2Q, 10:13 and vs. Buffalo, 2Q, 0:29)

*Miscellaneous tape study note from Orange Bowl: Florida State's 6'4" WR Rodney Smith (4.43 at Combine) has an NFL future. Perfect late-round developmental pick in this draft. Also like Northern Illinois DB Jimmie Ward (#15)... will be senior in 2013 and a player I monitor.

Overview: Interesting player with prototypical physical characteristics and length for the position, which is made even more enticing when factoring in instincts and football IQ. Has some warts and quickness out of breaks is concern, but can't deny upside and fits profile as potential steal on Day 3. Will earn keep on special teams at first and has skills to eventually crack starting lineup in base defense. Have only heard good things about his character, has been described as "wise." 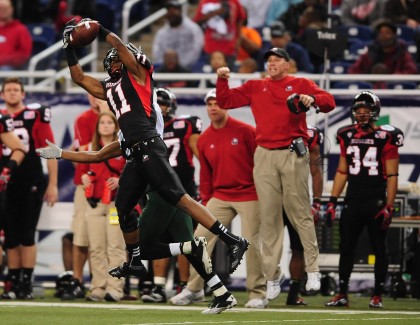