There's been a lot of talk this offseason about whether or not the Eagles are likely to run a ‘hybrid' defensive front under Chip Kelly and Billy Davis. 4-3, 3-4, 4-3 under; there have been lots of labels, but Chip and Co have been more than a little cagey about giving out details of what they intend to do. I think Kelly has a particular desire for versatility in all phases of the game and therefore get the feeling that he'd prefer a hybrid scheme if possible, but most of the speculation so far is coming up with non-hybrid systems.

Before we can start to talk about hybrid schemes, we first need to define what we actually mean. It's easy to say that it should be something that combines elements from a traditional 3-4 defense with those of a 4-3 defense, but that is still not entirely clear. For example, in its simplest form, a 3-4 just means any defensive front that involves 3 linemen with a hand on the ground and 4 linebackers. Conversely, a 4-3 is any defensive front with four down-linemen and three ‘backers. By this particular definition, Billy Davis's 4-3 under is not a 4-3 at all. The reason the name has stuck, however, is because it combines 3-4 personnel with 4-3 alignment and concepts.

A more pertinent question, though, is whether you want to run a one-gap or a two-gap system. The former is typically associated with a 4-3 and involves each of the down-linemen being shaded to one shoulder of an offensive linemen. At the snap, they attack the space between blockers in order that they can either break into the backfield quickly to get pressure on the quarterback or plug holes in the running game. When a run is diagnosed, the linebackers also have gap responsibility to fill the holes left by their linemen, as shown below: 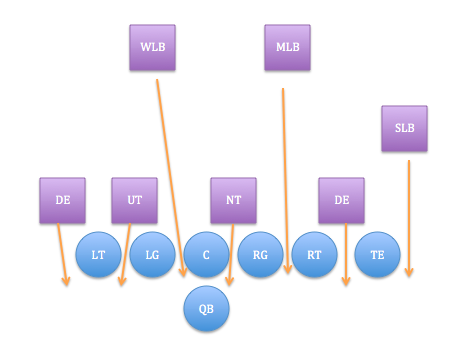 That diagram highlights the gap that each player is responsible for in a typical 1-gap system. I've drawn it with 4-3 personnel, but for the 3-4 version (like the one Wade Phillips prefers) the DE to the left will stand up as an OLB, but the gap responsibility remains the same.

A 2-gap system is typically associated with the 3-4. Each lineman is responsible for two gaps so, instead of shooting upfield at the snap like his 1-gap counterpart, he attacks his blocker head-on and attempts to knock him backwards. At this point, he needs to read and react to the play. If it's a run to either of his gaps he needs to shed the block and make the tackle. If it's a pass then he needs to shed the block and try to get into the backfield. Either way, shedding blocks is a very important skill for 2-gap linemen.

My personal favorite approach to creating a hybrid defensive front comes from the mind of the guy everyone loves to hate, Bill Belichick. In New England, he has installed a defense that contains a mixture of 1-gap and 2-gap responsibilities on the same play. Take a look at the diagram for a better idea of what I'm talking about: 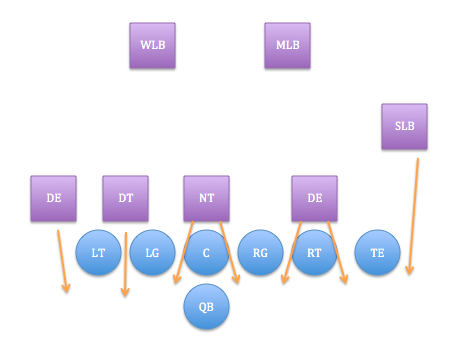 So here, the DE and DT to the left of the picture are shooting their gap and getting into the backfield. The NT and DE on the opposite side will try to knock their guy backwards and make plays in the backfield. One advantage of this system is that the MIKE and WILL don't have specific gap responsibilities against the run. That means the coordinator has the option to get creative with them in terms of blitzes and coverages without sacrificing the integrity of the run defense. The SAM keeps the same responsibility for setting the edge outside of the tight end (or following him if he goes out on a pattern).

One of the biggest keys to making this defense successful is a nose tackle that is dominant enough to push the center back into the pocket and then toss him aside and make a play on the ball-carrier/quarterback when the play develops. The Patriots have been lucky so far to have a guy like Vince Wilfork that can make these things happen. The Eagles don't currently have that guy.

Fortunately, though, there seems to be an ideal prospect for that exact job in next month's draft: Ohio State's Johnathan Hankins. Big John, as he's known, is 6'3, 320lbs, has an explosive first step to knock blockers off balance, long arms which enable him to shed blocks easily and frequently beat double-teams in college. There's a chance he'll still be available when the Eagles pick in the second round because he tends to wear down when asked to play 60-70 snaps a game, which might limit him to being a 2-down player or rotational guy in the pros. Nevertheless, in terms of talent and ability, he's one of the better DTs in this draft and would be perfect for the Wilfork-role (as I'm now calling it) in this particular scheme.

The fact that the Eagles have brought in Sopoaga (6'2, 320lbs) and Clifton Geathers (6'7, 325lbs) suggests that they're at least toying with the idea of using some two-gap assignments and my personal hope is that they take a page out of the Patriots' book by combining it with one-gap concepts in the same play (ideally with Cox playing 1-tech DT on the opposite side).

My preferred ‘base' coverage behind this front would be Cover-1 Robber: 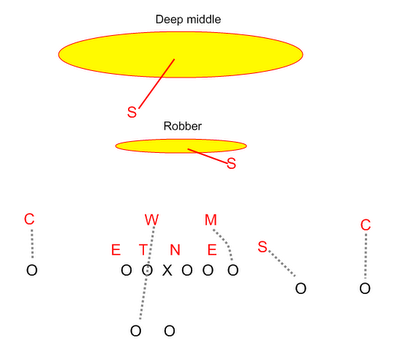 Like the regular Cover 1, this is a man coverage scheme with the CBs on the outside receivers and the LBs on the backs/TEs. Where this differs from a standard Cover 1, however, is that in addition to having one deep safety playing the centerfield zone, the other safety (or robber) drops into another zone across the middle. The idea is that the CBs force their receivers to the outside and the LBs force the backs/TEs into the zones covered by the safeties to help out.

This would seem to play into the hands of the type of DBs the Eagles have been bringing in so far. I'd be a little more comfortable if we had a true sideline-to-sideline safety, but I think that, coupled with the previously mentioned ‘hybrid' defensive front, we could build a pretty solid defense.

Overall, I think it's quite unlikely that the defensive scheme shakes out exactly like I've mentioned here, but I really think that this kind of hybrid system could hugely improve the team and fits in well with what I think Chip prefers to do on defense.