Yesterday we took a look at the Eagles picks we've tracked since December in our NFL mock draft central. Today, we forget the past few months and focus only on recent mocks. Plus, we've opened up this mock draft database to more than just my hand picked favorite mockers (mostly former scouts).

While Dee Milliner has been the most popular pick over the past 2 months, Eric Fisher is the top dog in recent mocks. In the 51 mocks we surveyed for this database, he was the Eagles pick 22% of the time. That's ahead of Milliner and Luke Joeckel, who are both at 18%. Star Lotulelei (16%) and Dion Jordan (10%) are the only others in double figures.

Here's a look at how often the top names come up. 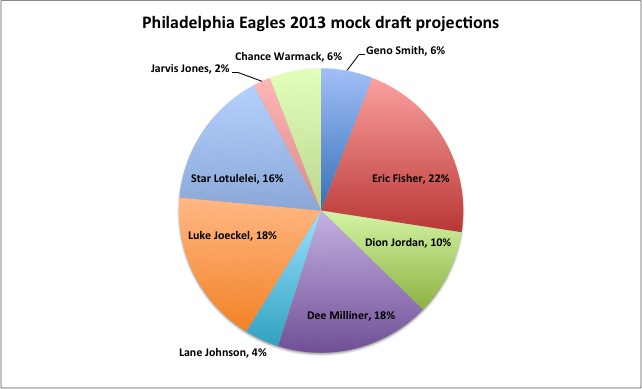 Offensive line has gotten even more popular as a pick in the past month. Since December, lineman represented 42% of the projected picks. In this past month, it's up to 49%.

Those offensive lineman have driven the picks in the last month to be 55% offense and 45% defense. Over the past 3 months, that number has been flipped.

Here's a look at the picks.