Since we've started our 2013 NFL mock draft central, we've tracked 31 different high quality mock drafts dating back all the way until the end of December. So with all that information at hand, I decided to do a little data mining.

Looking back through them, I was first surprised at how little has changed since even December, when the season wasn't even over yet. The top 5-6 players haven't really changed all that much, nor has the view of Eagles needs. They've certainly plugged some holes in free agency, but I don't really see how anything they did would take any of the familiar names we've seen out of the discussion for the #4 overall pick.

Here's a graphic look at how the mock drafts have broken down by player for the Eagles' #4 pick. 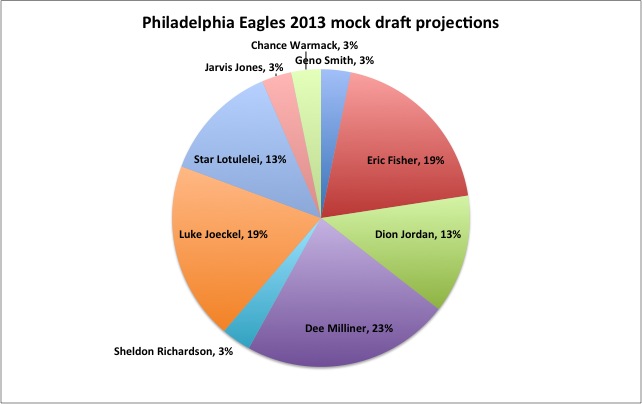 The closest thing to a consensus pick is Alabama CB Dee Milliner, who was the pick in 23% of the mock drafts. Not far behind though, was the OT duo of Eric Fisher and Luke Joeckel, who each were the pick 19% of the time.

So what does all of this tell us? Probably two things. Clearly mock drafters see the two biggest holes on this team that could be plugged with the highest value are corner and offensive tackle. Dee Milliner is the only corner worth taking at #4, while either Luke Joeckel or Eric Fisher would be perfectly fine at that spot as fixes for the offensive line.

Agree/Disagree? If the pick ends up being one of these three players would you be happy?