Haven't heard Demontre Hurst's name before? I doubt you're alone. He's generally regarded as a late Day 3 pick/UDFA. That said, as a draft nerd, what really tickles my fancy is the prospect of finding value late in the draft, and that's precisely what I see in Hurst.

Just so you know: Demontre Hurst isn't the sexiest or flashiest player, and if you have no interest in reading about prospects who are slated to go much later in the draft -- if at all -- then this post isn't for you. But if you enjoy the process of scouting players who aren't household names, all while hoping to potentially unearth that hidden gem who's been otherwise overlooked and/or disregarded, then follow me down the rabbit hole.

Disclaimer: It was difficult for me to study Hurst as comprehensively as I would've preferred, as the website I use for my evaluations (draftbreakdown.com) did not have a single player-specific cutup for him until six days ago. The cutup I'm referring to, vs. Notre Dame, was only posted because I personally requested it. Otherwise, I had to rely on a combination of the site's cutups of Tony Jefferson and just focus on Hurst instead, game highlights and full-game recordings posted to YouTube. For the 2012 West Virginia game, I had to use draftbreakdown.com's Geno Smith cutup, so I couldn't study Hurst during designated run plays, only in coverage. If there's a regret I have, it's that I didn't have access to the Oklahoma vs. Kansas State, Baylor and TCU games, as I would've loved to see how -- well, if -- Hurst matched up against WR draft prospects Chris Harper, Terrance Williams and Josh Boyce. Unless the more highly-touted Aaron Colvin drew those responsibilities. Anyway, onto the report itself....

Solid, steady stats over past three seasons as full-time starter

Despite being 5'9", vertical jump (37") and arm/wingspan should help make up for frame in jump ball situations and somewhat mitigate height concerns

Looks bigger and longer than 5'9", plays like it too

Tough, physical, unafraid of initiating contact, hits hard; will launch his shoulder into ball carrier but picks spots when doing so

Impressive, reliable, fundamentally sound tackler who wraps up and drives ball carrier to the ground; makes big solo stops on 3rd down short of the first down marker (i.e. 2012 vs. Notre Dame, 1Q, 4:23, 3rd & 10)

Really like him up near line of scrimmage, where he explodes forward and resembles a guided missile; great in support, patience and ability to read the play is quite useful in this role

Intelligent, high football IQ, doesn't cheat with his eyes staring into backfield/at QB, sticks with his man/responsibility, but, just as when he looks to deliver hard hit, he does pick his spots when it comes to peaking at QB

Two examples when football IQ and overall feel for the game show up in coverage:
1) vs. Texas in 2011, 2Q, 3:10. Texas QB David Ash is under duress, scrambling around in backfield, in desperation mode. Thinks he has open receiver at 45-yard line, makes throw intended to lead WR away from DB and toward sideline. Hurst -- on same side of the field -- recognizes situation, reads QB, comes off his man at 39-yard line and starts break just as Ash is releasing the ball. Steps in front of WR as ball is arriving, makes interception, returns it 55 yards for TD to make score 27-3 Sooners.
2) vs. Oklahoma State in 2011, 3Q, 3:36. Hurst originally matches up on outside receiver, but then slot receiver (Josh Cooper) comes in motion; Hurst funnels outside receiver to coverage inside after snap and then instantly switches to covering Cooper, who's running an out-and-up -- Hurst sticks with Cooper down the sidelines and is able to jump and get hand on ball to break up pass, even though momentum is taking him away from the play. Skill integration: coverage instincts and athletic ability.

Hustles downfield to put himself in position to make plays, whether it's tackling a player who wasn't his original responsibility or recovering a fumble (vs. Oklahoma State in 2011)

Can play press coverage but appears more comfortable playing off receiver, gives a lot of ~10-yard cushion at snap -- wonder about confidence in backpedal, flipping hips and running with receiver. Maybe it was just schematic? Looks better in zone than man coverage.

Common theme: Don't see him get tested too much in coverage (i.e. Geno Smith threw his way less than 5 times in 2012 matchup, preferring to attack the more highly-regarded Aaron Colvin instead)

Plants, drives and closes in a hurry, gets hand into receiver's catch area to disrupt catch attempt and knock ball away --> shows ball skills, even if not necessarily related to how good his hands are

Effective as a blitzer in limited opportunities

Not a flashy player, but plays disciplined, rock solid game predicated upon sound fundamentals both in coverage and as run defender

Continues to play hard, even when game is out of hand late (see: vs. Texas A&M, 2012 Cotton Bowl) 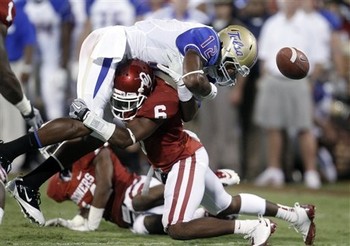 33 career PD but only 2 INT --> How are his hands/catching ability? How many of these PD could have been INT but were dropped?

Can struggle with initial reaction in press coverage, losing balance when flipping hips (then again, this was against Tavon Austin, who gets everyone attempting to cover him off balance)

One instance (vs. Iowa 2011, 3Q, 11:50) where Hurst gave too much cushion and was split-second late out of his break on a short throw, resulting in WR being wide open; I think this bothered me most because Iowa offense was stuck at its own goal line and, naturally, would be looking for quick throw to get some breathing room. Luckily for Hurst, WR had ball go right through his hands -- possibly as a result of "feeling" Hurst closing on him from behind?

Even when giving cushion, sometimes can be too aggressive and bite on double move; despite otherwise good showing during East-West Shrine practices, word is the over-aggression and biting on double moves happened then too

Question his quick-twitch movement, change of direction and recovery skills

Question his quick-twitch movement, change of direction and recovery skills, especially when it comes to sticking with receivers that release to the inside (this happened multiple times in the 2012 game @Iowa State) --> reinforces feeling that he's better in zone than man coverage --> 7.1 sec 3-cone drill (note: would've been third-worst among CB at Combine) also confirms this conclusion

2012 Notre Dame game: Bit on receiver's outside fake, turned around in coverage, gives up long completion... but it looks like safety hung him out to dry by biting on play-action fake to RB

Will he be able to hang with NFL WR on vertical routes? Got burned twice by Texas A&M's Uzoma Nwachukwu, once for TD (on a simply perfect and undefendable throw), in Cotton Bowl 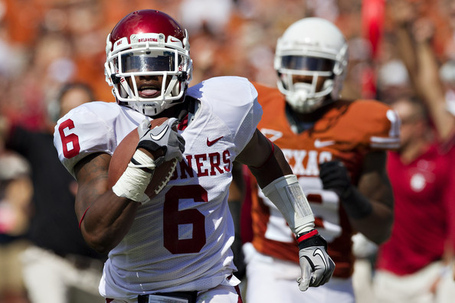 Overview: I decided I wanted to study Demontre Hurst closer and write a scouting report on him because, despite not getting the same hype as secondary teammates Tony Jefferson and Aaron Colvin, he always flashed during my live viewings of Oklahoma games. Overall opinion: A nice late-round sleeper/UDFA prospect. Interesting player whose tough, physical style belies his size. A reliable, consistent, game-in-game-out performer. Unique measurements in terms of arm length and wingspan for 5'9" height, which are even more notable when combined with 37" vertical jump. Similar to his stats, Hurst plays a solid, steady game; not the sexiest or flashiest player, but he gets the job done. Tremendous asset at LOS, against the run and is one of -- if not THE -- best tacklers of all the CBs I've studied thus far. More comfortable attacking and moving forward than he is retreating and shadowing in coverage. Size and speed could end up being prohibitive limitations in NFL, but I could just as easily see him developing into a viable #2/3. I certainly wouldn't feel comfortable betting against him.

DOB: ? (can't find on Internet)
Link to official page on Oklahoma Sooners website: http://www.soonersports.com/sports/m-footbl/mtt/hurst_demontre00.html
Interview from August 26, 2012: http://newsok.com/oklahoma-football-db-demontre-hurst-trying-to-fill-vocal-void-left-by-travis-lewis/article/3702960
Interview from January 29, 2013: http://newsok.com/oklahoma-football-sooners-demontre-hurst-talks-nfl-draft-his-time-in-norman/article/3750113 (I guess I can forgive him for growing up a Cowboys fan... maybe)