Eagles' Kenny Phillips: "I guess I'll have to learn to hate the Giants"

Kenny Phillips has spent his whole career hoping the Eagles lose, but now he's one of them.

Share All sharing options for: Eagles' Kenny Phillips: "I guess I'll have to learn to hate the Giants"

Kenny Phillips was a first round pick of the Giants, he became a Super Bowl champion with the Giants and spent the first 5 years of his career with the Giants. Over that time he developed a pretty healthy dislike of the Philadelphia Eagles, who are pretty clearly the Giants #1 rival.

"I didn't like them," Phillips admitted. "I mean, it's like I say, you're in the same division. You see these guys twice a year. I played against them for five years. I respected every single one of them. I thought they had a great team even with Vick. I always respected their team. Maclin and Celek and DeSean. You have to respect those guys because they go out there and make plays."

Now that has he switched sides in this great rivalry, will be switch his hate over to the Giants?

"Yeah, it's weird. It's definitely weird. But at this point I can't say I hate the Giants. When I was with the Giants I kind of disliked the Eagles. But I can't just say right now I hate the Giants. I guess I'll have to learn to hate them but like I said, I'm just happy to be here."

One of, if not the only major question regarding Phillips is the condition of the knee that limited him to just 7 games last season.

"I'm one hundred percent. It feels good," he said. "Since the season ended, I've been rehabbing five days a week and continue to get strong. I took my physical today and the doctors liked what they saw. If they didn't, I wouldn't be sitting here. Like I said, I'm one hundred percent right now and I'm just ready to get back to work." 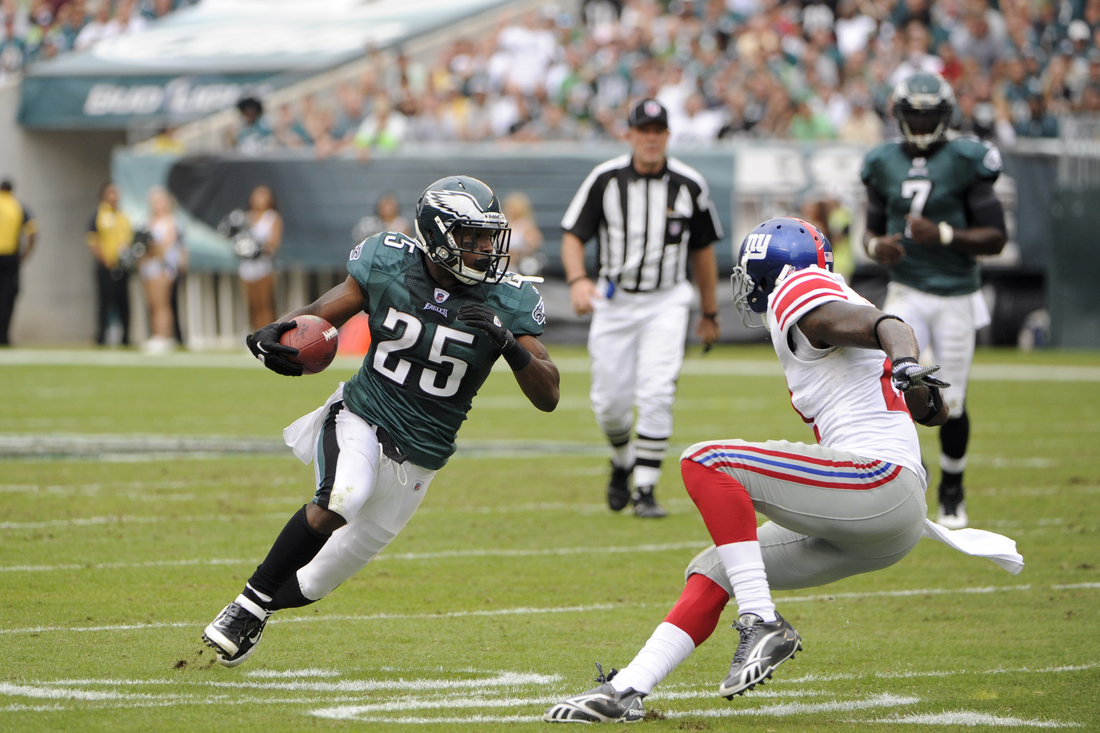 Kenny Phillips will appreciate only having to deal with this guy in practice. Credit: Howard Smith-USA TODAY Sports

Phillips says that one of the exciting things about playing safety for the Philadelphia Eagles is that guys like him grew up watching Brian Dawkins.

"When you're a young safety, you need someone to look up to. And [Dawkins] is one of the guys that plays fast. He was a big‑time hitter even though there wasn't a fine like that back then. But he was definitely a big‑time hitter. Watching him coming out of the tunnel, crawling and everything. I wanted to try one year, but I think I'm too tall. If I get down there, I might not be able to get up."

"But he's very exciting, man, just to see the way he played the game. He plays it so passionately. He's so passionate about the game. Just to be playing in a city and kind of trying to live up to him, just even try to be better, it was definitely a privilege to watch him."

On talent basis and a "what have you done in this league" basis, it's probably safe to say that Phillips is the best safety on this team since Dawkins. Not that that is a particularly high standard... That said, he's only on a one year deal for a reason and that's health. All the talent in the world is useless if you can't stay on the field.