The Eagles have seen a pretty big exodus this season, particularly on defense, which explains the volume of free agents they've been adding so far. In addition to the 4 defenders they signed on day one of free agency, they also added 2 more today with Kenny Phillips and CB Cary Williams.

The 6th defender added this offseason is Former Texans LB Connor Barwin. The deal is for 6 years and $36 million with only $8 million in guarantees. He could earn up to $40 million with incentives.

Barwin (26) is a big LB at 6-4, 268 and has played primarily in a 3-4 set. Clearly the the Eagles are focused on adding 3-4 players to the roster and Barwin certainly fits that mold. As of right now, he's the only pass rusher on the team with NFL experience in a 3-4.

The question is what Connor Barwin the team is getting. The 2011 version who looked like one of the best up and coming 3-4 pass rushers in the league and racked up 11.5 sacks? Or the 2012 version who managed just 3 sacks and graded out as a -19 in PFF's ratings? 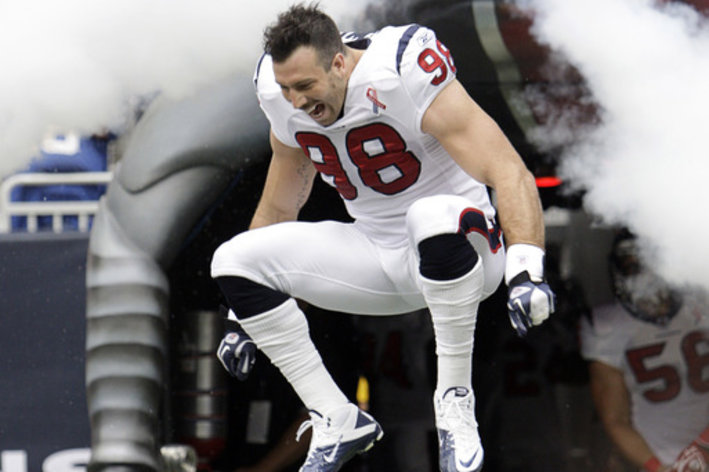 When you break it down, the Eagles signed Connor Barwin to a relatively team friendly deal

He did play a huge amount of snaps for the Texans last year, 94% of their total defensive snaps to be exact. He's only 26, so there's still a lot of room for upside and perhaps being rotated a bit more (as he was in 2011) would help.

A ton of speculation, but no real answers. For whatever reason, he didn't seem to get the same kind of pressure he did in 2011, though it also seemed he was dropped into coverage more in 2012 than he had been.

There are some of us who wonder if his decision to turn down Houston's offer of an extension back in August messed with his head all season. Rumor was that the Texans actually offered him a good chunk, if not all, of the guaranteed money they eventually gave to Matt Schaub.

Barwin was right to bet on himself. I thought he'd have another monster year and that some team (not the Texans) would give him $25+ mil guaranteed to get after the QB. Hope he does well for you guys in Philadelphia; he was very well liked in Houston, and we'll miss him.

Can James Casey be the next Aaron Hernandez?