So, I stumbled upon James Casey's college highlight video from his time at Rice, and I want to share it with everyone -- who hasn't seen it already. Enjoy.

Edit: After a quick perusal of some previous articles, I see the link to this YouTube video was already posted (as I figured, given the video's easy accessibility) in the "Free agency open thread" comments by G00SE. Therefore, G00SE, you get credit for first sharing the cutup, which is now getting front-page treatment. Come collect your prize, which is a whole pile of nothing... except for credit.

On the heels of yesterday's introductory press conference forJames Casey and Isaac Sopoaga, and Chip Kelly's remarks about how he plans to utilize the former in an Aaron Hernandez-type role, I felt it was appropriate to disseminate this video on the site -- even though a number of you have probably already seen it. I really don't have much more to add aside from what's above, except that I didn't choose the accompanying song. I apologize for AFI's "Girl's Not Grey" in advance if that's not the type of music you dig. Luckily, you have a mute button on your keyboard. So before you complain and flaunt some misplaced sense of auditory superiority, shut up.

The video itself is 5:37 of versatile, Swiss Army knife goodness. You're privy to the cornucopia of ways in which Casey was used in Rice's offense -- lining up outside, in the slot, covering up the tackle, in the backfield, even atquarterback on option plays. By now you've surely heard how he once payed seven different positions in one game for the Owls. A lanky target blessed with a distinct case of get-to-the-sticks syndrome, Casey ran almost exclusively intermediate routes and was fed a lot of screens to take advantage of his after-the-catch skills. He has noticeably bulked up since entering the NFL, but still possesses the same natural hands, athleticism and overall fluidity and smoothness. I'll tell you another thing: Casey is one tough hombre, unafraid to take a hit to make the play. He and Brent Celek, new partners in crime, both have that bull-in-a-china-shop mentality.

I still want the Eagles to draft a huge (6'5"-6'8"), dynamic, superfreak TE to serve as a true complement, but count me as someone who's excited about the James Casey signing and can't wait to see how Chip deploys his new toy. Everyone knows we're going to see him throw at least one pass this season, right? I'm expecting Casey's production from 2012 -- 34 receptions, 330 yards, 3 touchdowns -- to double. Let's go with 65 receptions, 700 yards, and 6 touchdowns. If we're really lucky, that prediction will end up being on the low end.

Caption: I see you, Celek. I can hurdle fools, too! Wheeeeeeee!!!!! 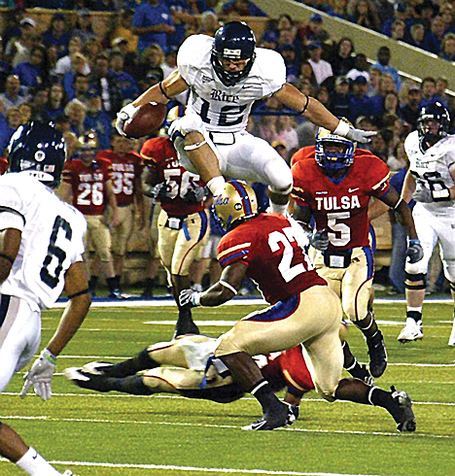