Share All sharing options for: Nnamdi Asomugha cut by Eagles

The Eagles announced today that they've have released CB Nnamdi Asomugha, just 2 years after the former All Pro signed a 5 year, $60 million deal.

"Coach Kelly and I each had a chance to speak with Nnamdi earlier and he took the news with a lot of class," said Eagles general manager Howie Roseman. "We expected nothing less than that from him. He has been a true pro on and off the field for this organization and our community and we wish him all the best as he continues his NFL career. We spoke to his representatives at the Combine about his future status with the team and wanted to take time to analyze and make a decision. In the end, Coach and I both felt we needed to move in a different direction at the cornerback position for 2013 and beyond."

The former All-Pro signed with the Eagles on the first day of free agency during the summer of 2011, so it's fitting that he would be cut on the first day of free agency in 2013. According to reports the timing of the move will allow the Eagles to avoid a cap hit and will allow them to recoup $11 million in cap space. Estimated totals for the Eagles cap are now around $44 million just minutes before the start of the annual NFL-wide shopping spree.

"I'm very grateful for my time in Philadelphia and I want to thank the Eagles organization for the opportunity to play here," said Asomugha. "It was an honor to play in such a great football city with such a passionate fan base, and I wish my former teammates and coaches the best next season."

This has been a long time coming and I am sure there are some that are bummed by this move, but I doubt there are a lot of people in that camp. Nnamdi has dealt with several weird news clippings as of late whether it be about his rush to point fingers at teammate or his unusual lunch habits, but now he is no longer the Eagles problem.

Some say the best messages are short but sweet so I leave you with this: 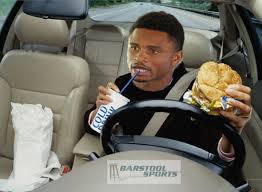 How do you feel right now?

Eagles in on Laron Landry