With March now here, it's time to start really churning out these draft profiles. Johnathan Hankins gets lost in the shuffle when it comes to the deep DT draft class of 2013, and I think he's become undervalued.

The class of DT in this upcoming NFL draft is so incredibly, stupidly stacked that the one generally considered "just" fourth best, Johnathan Hankins, could end up being better than Sharrif Floyd, Star Lotulelei and Sheldon Richardson. That's not a popular opinion, but I don't care because it really wouldn't surprise me at all. You want to know who Hankins reminds me of at times? VINCE WILFORK. Wouldn't you want that type of player in the middle of the Eagles defensive line? To team up with Fletcher Cox, Cedric Thornton, Antonio Dixon, Brandon Graham and Trent Cole? I'm about to go through my scouting report on Hankins, replete with the videos I watched that led to my conclusions -- I figure this is as good as it can get with regard to transparency when it comes to my thought process.

I'll link to to three game cutups, courtesy of the godsends over at draftbreakdown.com. Let's start with Johnathan Hankins' most dominating performance of 2012, against Michigan (via Adrian Ahufinger):

This Michigan game is when the Vince Wilfork comparison kept popping into my head. I'm still trying to decide which is my favorite play: Rag-dolling/throwing aside top OT prospect (now for 2014) Taylor Lewan at the goal line before stuffing RB short of end zone, or when he lays his shoulder into an unsuspecting Denard Robinson as the QB is going to the ground, annihilating him and dislodging the football in the process. Think this might have to be a tie. There are so many other fun plays to choose from in this game, too! Shit, perhaps the most purely endearing play of all was when Hankins chased Denard Robinson 30 yards -- on the long TD run -- before realizing catching ol' Shoelaces wasn't going to happen and mercifully slowing down.

Johnathan Hankins vs. Cal, 2012 (via JmpasqDraftjedi):

Nothing delights me more than when I literally don't have to wait at all for a guy to flash special ability. Like in the second snap of the above video.

Starting at 0:24 of the Nebraska video, Hankins crosses guard's face, swoops/penetrates inside and is bearing down on Taylor Martinez within one second of the snap; definitely forces hurried throw, which leads to an interception. On the ensuing return, Hankins runs after Martinez and pushes him to the ground so he can't chase down cornerback before completion of the pick-six.

Do yourself a favor and check out Johnathan Hankins' full video archive at draftbreakdown.com. You'll have a lot of fun and want to thank me later, I promise.

- Whoa, dude is a FORCE. Dominant, can ruin an offense all by himself.

- Special breed. Unique combination of power, quickness and explosion, with knack for blowing up plays a split second after the snap ("get-off is unreal" - @JinxAllesio... informative, entertaining and definitely worth a follow for all draft nerds).

- Terror on the inside, gets great push, puts guards and centers on roller skates, frequently collapses the pocket. Keeps interior linemen off linebackers (keeps LBs "clean") and allows those behind him to fill holes and make plays without resistance.

- Seemingly always "re-establishing the line of scrimmage" a few yards deep in the backfield. Just to reiterate @JinxAllesio's quote, Hankins fires off snap like nothing I've ever seen from a player at his position.

- Rare, tremendous athlete for his size (even drops into space and covers short middle of the field at times!). So light on his feet, nimbleness and agility simply blew me away. Smooth, natural. Has a distinct swiftness to him and doesn't move like a guy who's carrying 320+ pounds. His 5.31 40-yard dash time* is irrelevant to me, on tape I see remarkable ability to close within 5-10 yards.

*Here's a link to his official NFL.com Combine page.

- Motor is incredible. How am I supposed to NOT be drooling over this guy? Nonstop effort, always chasing the play, whether it's downfield or to the sideline. Hustles his fucking ass off. Makes a shocking amount of tackles 5+ yards beyond LOS. (Edit: Addressing"motor" concerns you'll read about at the end of this piece -- Hankins played a ridiculous 85.7% of the Buckeyes defense's snaps this season. What 320+-pounder wouldn't wear down at times with that kind of usage? Suffice to say he won't be playing 85.7% of snaps in the pros).

- Disengages from blocker and makes tackle on ball carrier over and over. Sometimes makes tackle as player is running by... turns, explodes, lunges, corrals, drags him down.

Want to know who Hankins reminds me of at times? VINCE WILFORK.

- Exceptional against the run. Plus-plus in that regard. Demands extra blocking attention. Quick enough to shoot gaps, strong enough to bully offensive linemen and stand ground. Excels in short-yardage situations.

- Versatile, versatile, versatile. Can play the 1-, 3- or 5-technique in 3-4 defense (or 4-3 Under), also fits as a traditional 4-3 DT. Put Hankins anywhere along the defensive line, he'll provide utility. When I watched the tape, I couldn't help but view him through the prism of what he might look like alongside Fletcher Cox, Cedric Thornton, Antonio Dixon, Brandon Graham and Trent Cole. Yes, please.

- Really throws weight (all of it) into every hit, wants to inflict pain and make opponent remember him. Or, as I jotted down in my original handwritten game notes... "OOOOHHHH MURDER!!!!"

- Instinctive, intelligent, patient player. Not overzealous in pursuit. Able to read, process and react in an instant.

- Good awareness, attempts to get arms/hands in passing lanes when he knows he won't be getting to the QB.

- "Sloppy body"? Don't care, he's a beast on the field. Good to see that the arms measured 33", translates when I see him attack and dictate action by shooting out/extending into blocker's chest.

- Biggest complaints: Neutralized by double teams, doesn't beat them regularly (more an observation than "weakness" that concerns me since it's not, you know, easy to beat double teams; just means he's not a 0-tech/classic 3-4 NT). Sometimes gets stalemated and rendered ineffective along LOS in pass rush situations. Gets high in stance and will be single blocked, tries silly spin move too often and gets off balance. But sometimes the spin move actually works and helps stop play in its tracks (see 2:51 vs. Nebraska). That's really it for my gripes, honestly. Minor, nitpicky stuff. 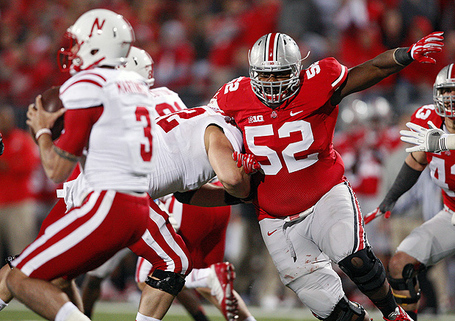 As for my motivation to write this specific draft profile, it's two-fold. First, I selected Hankins for the Eagles at #35 in the four-person, four-round mock draft that Mike Kaye will be publishing next week. Consider this something of a primer for that piece. Second, seeing national draft writer Rob Rang of CBS Sports spew bullshit about Hankins' motor aggravated me (and he's not the only person who's been guilty of it, either):

33. * Johnathan Hankins, DT, Ohio State: In terms of pure talent, Hankins deserves to be ranked among the top 20 prospects in the country. Unfortunately, his motor too often appears to be in neutral rather than overdrive, something he didn't address well enough for my taste on or off the turf at the combine and is slipping down my board as a result.

I agree that "in terms of pure talent, Hankins deserves to be ranked among the top 20 prospects in the country." No argument here, I have Hankins in my top-20. What bewilders me in Rang's blurb is the next sentence. Watch each of the three games I embedded in this post. Then go watch Hankins' entire dratbreakdown.com archive. There's eight games total, five from 2012. I've scouted every single one. Now, tell me, does that look like a player whose "motor too often appears to be in neutral rather than overdrive"? If Hankins' motor isn't in overdrive, then what the hell is "overdrive"? He's literally always moving, hustling, flowing to the ball. I don't see any other DT prospects from this draft class making more tackles downfield! If anything, it seems Hankins' motor is being insanely underrated. Or maybe all these years I've just had misconceptions about what classifies as a "motor"? Someone help me out here because I'm genuinely dumbfounded.

I'd also be interested to know how, exactly, Hankins didn't address Rang's nonsensical motor concerns "well enough for my taste on or off the turf at the combine." But no, don't elaborate. That's entirely responsible.

Anyway, have a look at Johnathan "Big John/Big Hank" Hankins for yourself and be the judge. Think he'd fit in the Eagles' front seven?