The Nick of the Irish

How big a role does luck play in the performance of Nick Foles?

Share All sharing options for: The Nick of the Irish

Despite what his current TD to interception ratio may tell us, we know that Nick Foles isn’t perfect. We desperately want him to be because we are like the skinny soldier guy from Braveheart who looks at William Wallace in disbelief and says, "William Wallace is seven feet tall." We look at the stats and have an idea of how Nick Foles is supposed to play in Chip Kelly’s offense. Then we look at the man and we see the laboring gallop, the game against Dallas, and the interception-that-wasn’t to Patrick Peterson and say, "That’s not Nick Foles. Nick Foles is supposed to be a Chip Kelly quarterback." Then Foles turns to us and says in his best Scottish accent, "Yes, I’ve heard, and if he were here today, he’d consume the English with fireballs from his eyes, and lightning bolts from his arse... I am Nick Foles!" And then we watch him throw another touchdown.

So if we know that Foles isn’t perfect, how do we explain this incredible streak? How do we explain the nineteen touchdowns and 233 consecutive throws without an interception? Is he really that good? Or, as the Peterson play seems to suggest, "is there some other, more extraterrestrial explanation" (I wrote that in my best Ancient Aliens voice). Has Foles just been really lucky?

Well, I don’t buy this idea of luck. I especially don’t think it exists in football, but that may just be based on what my definition of luck is. To me, luck is akin to superstition, magic, fate, or God. It’s something to which we give credit in the absence of any logical explanation. In football, we seem to attribute luck to the bounce of the ball, a gust of wind, a referee’s call, a fumble recovery, or any event that results in unexpected good (or bad) fortune (like an interception called back because of a ticky-tack penalty). In reality, those unexpected instances of fortune are simply products of the game.

A few years ago (2007), Brian Burke from Advanced NFL Stats did some nice research on how much "luck" impacts the game. But his definition of luck is more concrete. Burke calls luck a random process, one in which the outcomes have an equal chance of occurring and cannot be controlled. And what he found is pretty interesting. Look at his chart below. 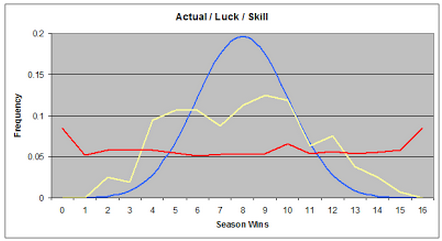 Luck is akin to superstition, magic, fate, or God. It’s something to which we give credit in the absence of any logical explanation.

We can try to apply this to Nick Foles’ streak. In college, Foles averaged 42 pass attempts per interception. His current streak stands at 233, equivalent to flipping a coin six times when all six flips result in heads. You can attempt to do this yourself and chances are it will happen once in 64 attempts, or 1.56% of the time. So if more than half of NFL outcomes are a result of random processes, does that mean more than half of what Nick Foles has accomplished is also the result of this kind of "luck"? Is Foles in the middle of a virtual coin-flipping hot streak?

I’m not so sure. In order to explain, I’d like to modify Burke’s definition of luck a bit. Instead of random process, I’d like to use chaotic process. The game of football is indeed chaotic. Every point in the game is sensitive to, and represents, a new set of initial conditions. These conditions include everything we can possibly think of: each team’s scheme, system, strategy, play call, coaching, how players respond at the line of scrimmage, officiating, wind, sun, skill, talent, injuries, confidence, etc. It’s not even the sum/product of all of these conditions that results in any one particular outcome. All of these conditions react with each other in independent ways. It’s purely chaotic. And yet, from chaos comes order. So it’s not necessarily luck or random process that is acting on skill in Burke’s win distribution graph; it’s chaos.

What does this mean for Nick Foles? It means he’s operating within a complex system (like Chip Kelly’s offense) that is trying to best another complex system (the opposing defense). It means that he could have a 50% chance of throwing an interception, not with his next pass attempt, but within his next 42. It means he’s not lucky, but that his performance is a product of the game and the decent number of conditions he, and his team, can control. It means he can consume the Detroit Lions with fireballs from his eyes and lightning bolts from his arse, despite what luck, magic, and fate may dictate. I don’t know about you, but I’m pretty damn excited about that.