Adding some nuance to my Billy Davis rant, and discussing the blitz risk/reward tradeoff

received some pushback from yesterday’s Billy Davis rant, so today I’m going to try to add some nuance to my explanation. First, I want to note that while Davis bears the brunt of my criticism, he’s certainly not the only DC I disagree with on a fairly consistent basis. Graded against everyone else, Davis is OK (for now). However, as is usually the case, just because everyone else does something doesn’t mean we need to do the same thing. Conventional wisdom, especially in sports, frequently lags the "optimal" strategy.

My general take on this is that the Blitz (sending more than 4 pass rushers)should be viewed as a TOOL, not a general philosophy. I realize that in Philadelphia, that’s borderline heresy (lot of Jim Johnson fans out there). But let me explain.

To complete a pass, two things must happen (generally speaking): an "open" receiver must exist, and the QB has to identify that opening (after which he presumably throws the ball there). It’s tough to determine what constitutes an "open receiver", so I’m going to discuss this side of things in terms of Windows. So a passing window refers to an opportunity to place the ball where the receiver can catch, and one must exist and be identified in order to complete a pass. Simple enough?

Also, for a QB to identify the available passing window, he must have TIME to do so. The more time he has, the higher the odds of him seeing an existing window or of one developing.

By breaking the process down into these factors, we can see the basic trade-off in defensive strategies (against the pass). The best of both worlds, of course, is to minimize the passing windows AND minimize the time the QB has to identify them. That’s why DEs are so coveted. If you can generate a strong rush (i.e. lower QB time) with just 4 d-linemen, you can use everyone else to close passing windows. However, very few teams area able to do that on a regular basis.

More often, you have to make a choice. You can rush an extra man (blitz), which should decrease the amount of time the QB has to see a window. Conversely, you can rush fewer men, and use more of them to minimize the windows.

With me so far? Good, now let’s talk a little bit about passing windows.

Passing windows open and close throughout each play. A complete pass occurs when one of them opens and the QB hits it. To help illustrate, I’ll pick a random frame from Sunday’s game: 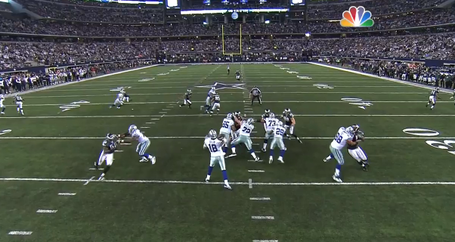 Nice….Now let’s superimpose the passing window on it. Despite the outcome of the play (Boykin game-saving interception), there was, in fact, a window to hit here for Orton. 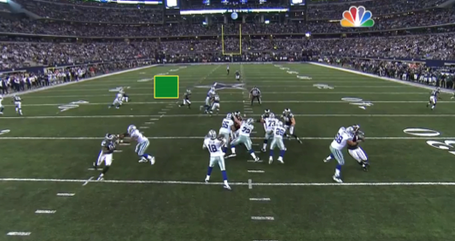 That’s a rough approximation, obviously, but you can see the idea. Given such a big opening, how the hell did Orton miss? Any guesses?

That’s a little unfair (just a little), because every QB misses opportunities sometimes. However, let’s dig a little deeper into this.

When deciding what pass-rush strategy to use, there’s perhaps no greater factor for consideration than the skill of the opposing QB. We now have to combine the QB skill with our Window illustration from above. Let’s visualize it like this:

Don’t get too caught up in the relative sizes, this is far from a "to-scale" illustration. In the middle we have the passing window. On either side I’ve provided a visual representation of each QB’s (Peyton and Orton) accuracy. Think of the two layers as confidence intervals; something like 70% certainty the ball will end up within the smaller red circle and 90% certainty it will end up within the outer circle’s boundaries.

Hopefully this is rather intuitive. Now play a mental game using those images. The green square will move across the screen from left to right. You control the red circle, and your job is to align it with the passing window and and press go. Think of it like aiming a rifle.

Now…which player’s range (red circles) would you rather play with?

Easy, Peyton Manning’s, because his confidence ranges are smaller, meaning there’s a smaller margin of error. For example, let’s say you align each perfectly with the passing window:

See the problem? The window is smaller than Kyle Orton’s accuracy range. Meanwhile, it the window is significantly larger than Manning’s 70% accuracy range. The upshot, naturally, is that Manning is a lot more likely to complete this pass. Going back to our game image above, we can visualize the pass like this, with the yellow X denoting the final placement of the ball, which was intercepted. 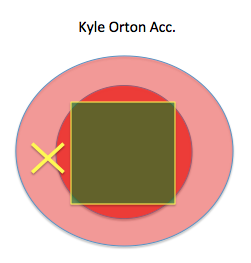 Now pretend you’re a defensive coordinator. Remember you have a choice to make between eliminating passing windows and minimizing time. In this exercise, you cannot do both. Against which player is the "window elimination" strategy more likely to work?

Since Peyton Manning’s required window size is so small, eliminating them will require extremely good coverage. More likely, you can play excellent coverage on the receivers and STILL not prevent several of these small windows from opening up.

Conversely, against Kyle Orton, things aren’t so difficult. He needs a relatively large window. Large windows are easier to eliminate. You don’t have to play perfect coverage. Notice in the Boykin play, there was a relatively large are in which Orton could have complete a pass for a big gain. Fortunately for the Eagles, Orton didn’t hit his spot. Boykin’s coverage was far from perfect, but it didn’t need to be!

In light of that, go back you your strategy decision. Which do you think is easier to do:

Now consider that Orton was operating out of 3-step drops for much of the night. Then, the answer is easy. Eliminating his passing windows is the much higher-probability play. Note that’s the BASE strategy. Obviously, you need to blitz every once in a while, if for no other reason than to add some unpredictability.

That’s the crux of my argument against Billy Davis’ blitzes. He doesn’t seem to vary his usage as much as I believe he should, and he doesn’t save his blitzes for high-leverage situations. Instead, he uses them in LOW-leverage situations, where the reward of a sack is comparatively low, especially when weighed against the odds of a big play.

Against a great QB (like Drew Brees this week), you have to be much more aggressive because it’s much more difficult to eliminate those passing windows. Moreover, there’s another factor to discuss:

A very successful blitz will result in a sack. A sack dramatically swings the odds of a turnover (punts included) in the defense’s favor. Now, comparing opposing QBs, against which ones do you think that’s most important to do? I’ll give you a hint, it’s not Kyle Orton.

Against a great offense or great QB (frequently one and the same), the odds of allowing a 1st down are comparatively high. For example, according to Pro-football-reference.com, the Denver Broncos faced 93 third downs needing 5 or fewer yards for a first down. They converted 62.4% of those.

Now compare that to a bad offense, like Baltimore (ranked 30th by Football Outsiders). The Ravens faced 96 third downs with 5 or fewer yards to gain. They converted just 49% of those.

As you can see, getting to 3rd and less than 5, normally not considered much of a "win" for the defense, is still good enough to get you to 50/50 against a bad offense. Assuming each opportunity is an independent event, the odds of the Ravens converting two consecutive such third downs is just 25%.

Hopefully your mental light-bulb just turned on. Facing a Kyle Orton-driven offense, the Eagles were looking at a team much closer to the Ravens than the Broncos. In that situation, just preventing a big play and forcing the Cowboys to convert a string of third downs was VERY LIKELY to produce a punt.

In other words, we didn’t NEED a sack! The odds were already in our favor. Conversely, if we had been facing the Broncos, the risk/reward equation flips. That team is much more likely to convert a string of third downs, meaning the defense needs to do something to increase its odds. Getting a sack is one of the only affirmative ways to do this. In that case, the reward of getting a sack outweighs the risk of giving up a big play. Without the sack, you’re likely to give up a long drive anyway!

Against a bad offense, though, that’s not the case. It’s better to sit back, eliminate passing windows, and wait for the odds to shake themselves out. By blitzing bad QBs, you’re making a foolish grab for upside that you don’t need. Bad QBs will struggle to hit receivers that are even marginally covered, so why make it easy for them by making those passing windows larger?

Hopefully that illuminated things a bit more clearly. Basically, against bad QB’s, the odds are already in your favor. The reward of a sack (or forced incompletion), and the increased odds of a punt that come with it, are NOT worth the risk of the big play. In all likelihood, a bad offense will NEED a big play in order to score. They simply won’t be able to string together a 12 play drive with a lot of 3rd down conversions. Hence, the goal should be to get to third down as often as possible, and let the odds take effect.

Against a great QB, though, that’s not enough. They ARE somewhat likely to string together 3rd down conversions, especially if their short yardage situations. Similarly, they DO NOT need a big play to sustain a drive. In that case, the risk of giving up the big play (which is worth relatively less to a great offense than to a bad one) is worth the associated reward of a longer yardage situation (which the defense needs to push the odds in its favor).

That doesn’t mean you never blitz a bad QB or always blitz a great one. It does mean that you’re general pass rush strategy, particularly when it comes to sending extra pass rushers, should vary greatly depending on which QB you’re playing against. Just saying "we’re a blitzing defense", so we’ll blitz, is a very low-level strategy. It’s far too simplistic, and sounds a lot more like a crutch than a well-thought out, adaptable and deployable strategy.