The Benefits of Being a High-Variance Team

Share All sharing options for: The Benefits of Being a High-Variance Team

This originally appeared on Monday at EaglesRewind.com.

Great game yesterday. It was a nice preview of what this team COULD be if both the offense and defense play well at the same time. Can’t ask for a much better set-up for the Eagles than a win-or-go-home game next week in Dallas. The Eagles are, objectively, a much better team. The stakes should take care of the motivation aspect. Also, with Romo being out (assuming the news is accurate), if Foles shows up looking anything like "GoodFoles", there’s very little chance of Kyle Orton keeping pace.

According to Football Outsiders, the Eagles are ranked 31st in the league by DVOA Variance, at 25.4% (BEFORE the Chicago game).

Only St. Louis has been more uneven. Normally, you’d prefer your team to be both very good, and very consistent (low-variance). That’s the goal. However, there’s more to the story, and it ties in to our general underdog strategy discussion.

The Eagles are not the best team in the NFC. They might not even be in the top 5 (before yesterday, DVOA had them 7th in the NFC). That means that winning the Super Bowl will require winning multiple times against unarguably "better" teams. When I say better, I mean the expected performance of the other team is clearly higher than the expected performance for the Eagles. Of course, that’s only one part of the equation. The other, obviously, is variance.

The fact that teams don’t always perform to expectations is exactly what makes the game fun. Otherwise, there would never be any upsets. So…taking the next step, that means if you’re a large underdog, you really want at least one of the teams involved (you or the opposition) to be a high-variance team. Remember, underdogs (both ex-ante and as a result of current conditions) want to MAXIMIZE variance.

Let’s illustrate. Below is a graphic showing the expected performance distributions for two teams. Unfortunately, the shape-options in PowerPoint are fairly limited, so the shapes are a bit crude. 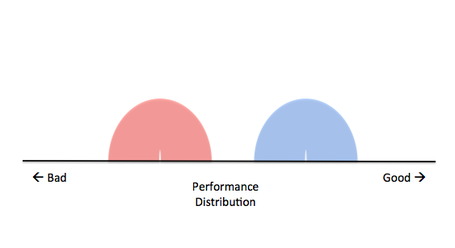 Above, the width of each distribution and it’s height at each point tells you both how good the team is and how consistent it is. If this were a "to-scale" drawing, the area under the curve would add up to 1. Notice that in the above chart, there is a gap between the two teams. That means, in this case, the Red team would NEVER beat the blue team.

Let’s pretend you’re the Red team. What can you do? Obviously, you can’t do anything to Blue’s distribution. In general, the whole point of team-construction is to move the distribution to the right, so that’s option A. If you shift Red far enough to the right, you’ll catch up to Blue.

But what if it’s in-season? What if you only have one week before the game? You can’t do much to change the make-up of your team, so Option A is out. There’s still hope, though. You can WIDEN the performance distribution. This is what it means when we say teams in desperate situation must make High-Variance moves. Let’s say Red team had the same average performance expectation, but is now a High-Variance team. Then the chart might look something like this:

See the overlap? That’s the key. Although it’s still unlikely, there is now an actual possibility of Red beating Blue. Notice that there’s also a possibility of Red losing by a lot more than it would have before. However a loss counts the same whether it’s by 1 point or 40 points. (Ask any real racer….)

Back to real life: the Eagles have a very WIDE expected performance distribution; it’s reflected in their high-variance. That means that even if they’re undeniably worse, on average, than a team like Seattle, they’ve still got a decent shot at winning (compared to if they were a low-variance team.)

Charting each team against Seattle (very rough approximations here), we’d get something that looks like the following:

Notice that while the Eagles’ average is worse than the Cardinals, their overlap with Seattle is actually greater than the Cardinals. We’d have to do some calculus (and put a lot more effort into an accurate chart) in order to calculate the difference, but the overall idea is sound.

While it’s incredibly unlikely, the Eagles do stand a greater chance than similarly skilled teams to actually win the Super Bowl if they get to the playoffs by virtue of their high-variance nature.

Lastly, let’s look at the regular season variance of recent Super Bowl winners (this is going to warrant a dedicated post, but let’s just take a peak for now):