Chip Kelly has gotten a lot of attention in his quest to educate fans & the league on why time of possession is an unimportant stat. Now it seems like another NFL cliche is in his crosshairs.

Share All sharing options for: Chip Kelly on Billy Davis and why a resume doesn't tell a coach's story

I was browsing Peter King's MMQB this morning, as I typically do on Monday mornings, and after the lengthy section on how good Nick Foles is I found this great tidbit from Chip Kelly that I just had to share.

When Chip hired current defensive coordinator Billy Davis, the first thing we all did was go back to look at where the defenses he previously ran ranked. We found that they weren't particularly special. A peek at the comments of the article we published announcing the hire will give you an idea of most Eagles fans reaction.

There was the anger...

"it could turn out differently but this guy screams "retread" to me. Why the hell would the Eagles hire a guy who has had coached or been a part of a bunch of teams with shitty defense when a guy like Monachino was available ? I give him a year, two at best. This is a garbage hire IMO."

"I could care less. this guy seems competent, just as long as we get him the personel we will be okay."

There were also some wise voices that reminded us that resumes don't always tell the story.

"Jim Johnson's resume wasn't particularly impressive before Reid hired him. I'm willing to give this guy the benefit of the doubt"

As it turns out, that last point was exactly what Chip Kelly was thinking. Because Davis once coached the Arizona defense and the Eagles were set to play the Cardinals, Kelly was asked last week why he hired Davis given that the numbers during his stint in Arizona weren't that great?

"I think people get so caught up in statistics that sometimes it's baffling to me. You may look at a guy and say, ‘Well, they were in the bottom of the league defensively.' Well, they had 13 starters out. They should be at the bottom of the league defensively. Is that Billy's fault? I don't know what it was, but I don't look at it that way. I hired [former Oregon offensive coordinator and current Oregon head coach] Mark Helfrich as our offensive coordinator when I was at the University of Oregon. Their numbers were not great at Colorado. But you sit down and talk football with Helf for about 10 minutes. He's a pretty sharp guy and really brought a lot to the table, and he's done an outstanding job. He's now the head coach at Oregon. Whoever coached Adrian Peterson, is that the best running back coach in the country? I don't know. I've got to meet him. He could actually be. But let's find out what he teaches. Some of it, you're teaching to what you have available to you and sometimes that's something that I consider. So I don't look at the statistics part of it and say, ‘Hey, we need to get that coach.' Sometimes, honestly, if you look at statistics, you need to get that player."

It's odd that we are so quick to trust the numbers for coaches because in practice we see all the time how unreliable they are. Steve Spagnuolo did amazing things with the Giants defense in his time there, but has been an abject failure at every single stop since. There are certainly reasons that could mitigate Spags' struggles, but then again there are reasons that mitigate his past successes as well. 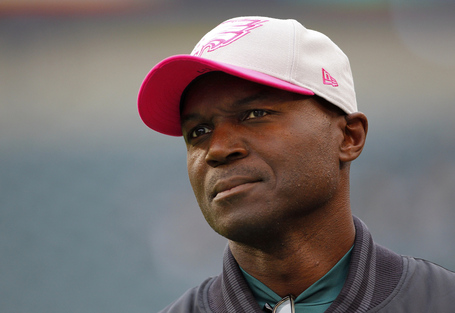 There's no way this bum could be successful elsewhere! (Photo by Rich Schultz /Getty Images)

Tying this discussion to yesterday's game, look at Todd Bowles. He presided over an Eagles defense that was bad under Juan Castillo and got even worse under his watch. Now he's in Arizona, with far more talent at his disposal, and is "responsible" for one of the best defenses in the league. With Bowles, as is the case with almost any coach, what you put in is pretty predictive of what you get out.

Then of course, there's our own dearly departed Jim Johnson, who many pointed out at the time of the Davis hire was a very old NFL retread with a middling track record in the league. However, Andy Reid liked the aggressiveness with which he called games. Having gameplanned against him, he liked the kind of blitzes Johnson called even though his teams may not have been talented enough to execute them. He thought that if he got that guy the kind of players he needed, he'd be successful.