Reports suggest that Adrian Peterson won't play this weekend, but he probably shouldn't even if he can.

Before we start, let's just be up front about something. Adrian Peterson is a future hall of famer, he's the best back in the NFL and if he doesn't play Sunday it without question raises the chances of an Eagles victory. As an Eagles fan that's a good thing so any advice I might have about Peterson can undoubtedly be seen as self serving.

That said, I harbor no deslusions that anyone in the Vikings front office or coaching staff cares what I have to say, so there's no harm in having a discussion about whether playing Peterson this weekend makes sense.

First some background, Peterson was carted off the field Sunday after hit by Ravens' LB Arthur Brown (brother of the Eagles Bryce BTW... conspiracy time!). X-rays were negative but he was diagnosed with a mid-foot sprain, an injury that kept the Cowboys' Demarco Murray out for six weeks last year.

Peterson said Monday he plans to play this weekend, but a report from ESPN cites a source that says this is unlikely to happen. He's currently wearing a walking boot and will not test out the foot until later this week.

No one doubts Peterson's credentials as a competitor and if he can handle the pain go you can be sure he'll want to play. But should the Vikings let him? 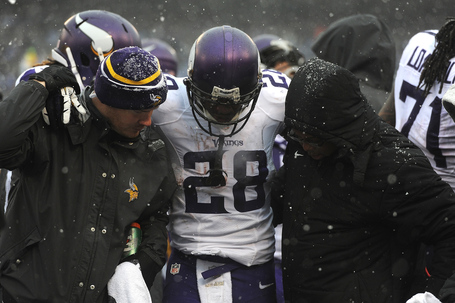 They are paying him a lot of money to play RB for them and certainly the paying customers in Minnesota would enjoy their gameday experience more with Peterson than without... But these are short term concerns.

We've already seen signs this year that Peterson might be slowing down a bit. He's still had a very good season, but is well off his otherwordly totals from last year. Still, even that only brings him down to something close to his career averages. He still is the best back in football, but he's no longer by far the best. Given that he's about to turn 29 next year, the clock is ticking for him as it does all RBs.

All RBs have a limited shelf life and Peterson, even as the freak that he is, is probably pushing his

Really that's always the concern with an NFL RB. They've all got a limited shelf life and Peterson, even as the freak that he is, is probably pushing his. Research has suggested that the benchmark for the number of touches an NFL RB has in him is about 2,800 for his career. After that, RBs typically decline quickly. Peterson has over 2,000 NFL carries under his belt to go along with 200 catches. That's about 2,200 touches. With 4 years left on his contract, it's pretty obvious he'll be hitting that benchmark sooner rather than later.

The question is how you want to allocate those miles on his tires? Now or maybe next year in games that could potentially mean a lot more?

RBs aren't like QBs, who you always want to get more reps and more throws. In fact, the numbers suggest that if you give a RB 400+ touches in a year, you'll probably ruin him. If the Vikings want Peterson to be a viable contributor when they're a viable team again, it would probably be wise to give him not only this weekend off but the rest of this year.

Like I said at the start, as an Eagles fan, there's clearly a self serving element here... But I can honestly say that if the roles were reversed my tune would be the same. I'd want McCoy shut down. Heck, if the Eagles clinch before week 17, I'd sit him then.