Share All sharing options for: RG3: Eagles defense "knew what was coming"

If it looked like the Eagles defense was a step ahead of the Washington offense yesterday afternoon it's because, at least according to Robert Griffin III, they were.

"They did a good job of scheming us up," RGIII said after the game. "They kind of knew what was coming before it was coming and that was disheartening."

Griffin said that in the passing game particularly, the Eagles always seemed to know where to be.

Griffin's point is that the Eagles defense was well schooled and prepared for what to expect from the Skins offense and executed a gameplan to stop it. The credit for that can only go to one place, defensive coordinator Billy Davis. Davis was under major fire early in the season for the massive struggles of the defense, but defenders of his pointed out that he was still trying to implement a new scheme and engineer the major shift from the 4-3 that has been run here forever to a new attacking style 3-4.

While that was certainly a valid defense for Davis, his detractors did note that there was still a lot left to be desired in his tactical sense regardless. His defenses seemed unprepared and his blitzes ineffective or ill timed. While there can be no doubt that the personel is grasping the scheme better, the tactical defeat of the Redskins speaks to Davis' improvement as a playcaller and game planner. 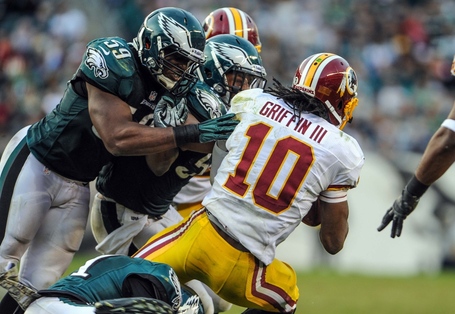 One more nugget in RG3's post game comments may also reveal something that has helped Davis. Griffin was responding to a question about whether the Redskins had become predictable.

"I don't think it has become predictable," he said. "DeMeco Ryans is a good linebacker and they do good things with him and the other guy - Najee Goode. They allowed DeMeco to play the pass first. A lot of times, we were trying to hit those [play-action] holes behind him and he can run to those holes. I think on the back, they did a good job of running to those holes - kind of scheming stuff and knowing what type of hole we're trying to hit on those three level holes, or whatever you might want to call it."

The point about DeMeco Ryans use was interesting to me. The play of the Eagles front 3, particularly Fletcher Cox & Cedric Thornton but also Bennie Logan, and the way they've been able to anchor the interior of line and stop the run has allowed Davis to deploy his inside LBs more against the pass. That has seemed to help against all the quick slants and crosses that had consistently carved this defense up earlier in the year.

Of course, you have to credit Ryans and Goode for not biting on the play action and filling the holes Griffin referred to, but even that will have been something that Davis prepared his LBs for.

So let's give Billy Davis an "attaboy" for the job he's done over these past 6 weeks. This was a defense that was poor last year and didn't get all that many major upgrades, it was down 3 starters yesterday and was ranked dead last in the NFL after the first month of the season. Since the 52 debacle in Denver, Davis' defense has allowed just 17 points per game and has clawed it's way up to 15th in the NFL in terms of points per game.

The defense is by no means a finished product and clearly there are more answers needed both for this year and beyond. However, this past month has given Eagles fans reason to believe that the guy best suited to provide those answers is already here on staff.