The Evolution and Anatomy of a Chip Kelly Play

Share All sharing options for: The Evolution and Anatomy of a Chip Kelly Play

First off, this is my first post for Bleeding Green Nation. I am very grateful to Brandon Lee Gowton for extending the offer for us to author a weekly post. My name is Ryan and together with my colleague David we've put together a Philadelphia Eagles blog that is primarily going to focus on breaking down the plays and schemes put together by Chip Kelly's new coaching staff.

Heading into the 2013 NFL season much of the discussion around the Chip Kelly offense was about how much of the high octane Oregon offense Chip Kelly was going to be able to manage to transition to the pros. There was widespread opinion throughout this discussion, but through 7 games I want to highlight one of the key aspects of his offense that has been instrumental to his success so far at this level. What I hope to achieve in this post is to show how Chip Kelly has taken a rather simplistic approach to play design and reads that has lead to a potent offense that is not gimmicky or overly complex.

Let's start first by quickly describing a packaged play. Check that, let me point you to how the brilliant Chris Brown describes Packaged Plays and the Newest Form of Option Football. This is mandatory reading to ensure you can really appreciate the nature of what Chip is trying to accomplish. Allow me a couple of key excerpts from that piece:

What was most interesting, though, was how Marrone and Hackett began compressing plays together, combining multiple concepts into a single play and then letting Nassib figure out on the fly whether to, say, throw a quick pass, throw a screen, hand off, or keep the ball himself — all on the same play.

"Combination" or "packaged" plays have been sweeping across college and high school football over recent years, enough that NFL coaches are clearly taking notice. The Bears, Panthers, Bills, Eagles, and Chiefs each ran a number of them in their exhibition games, combining running and passing concepts — meaning the offensive line typically blocked a run play while receivers ran pass routes or screens, leaving the quarterback to decide whether to hand off or throw it out wide — often at a no-huddle pace.

Bill Barnwell, also from Grantland , outlined the packaged plays Chip Kelly used in week one against the Redskins to make the term "mainstream" for Eagles fans.

But the one thing I have grown to appreciate over the last few weeks is how Chip Kelly is using this concept to put out film on given plays, but to evolve the actual options and looks over time to really throw a defense off guard.

To follow the evolution and anatomy of a play, let's start with a simple screen play the Eagles unveiled against the Giants a few weeks ago. The Eagles are lined up with 11 personnel with 3 WRs split out and a TE on the line. Vick is in the shotgun. The yellow arrows indicate what the eligible receivers are going to do on this play: 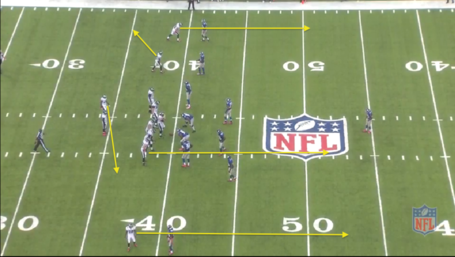 It's important to note at this point (because it will be important later) that read-option is not on. This is a called passing play and Vick essentially has 2 primary options and they are stretching the field horizontally. He has Damaris Johnson in a bubble screen on the top (which is well covered) and LeSean is going to leak out on the opposite side of the field in the flat. You'll begin to see from the action of the OL, this is developing nicely into a pretty standard screen play for McCoy: 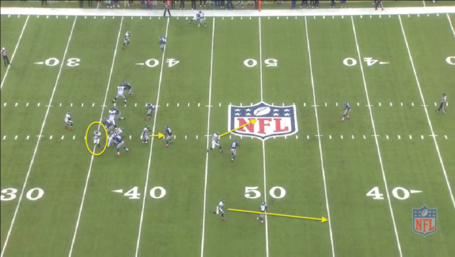 The following week against the Bucs we ran a similar play, but out of a slightly different formation with a "trick" look. This was the first offensive play against the Bucs, and once again the end result is a screen play. Here we line up Desean Jackson in the backfield, we are going to send him motion out of the backfield which is a distraction for the defense. 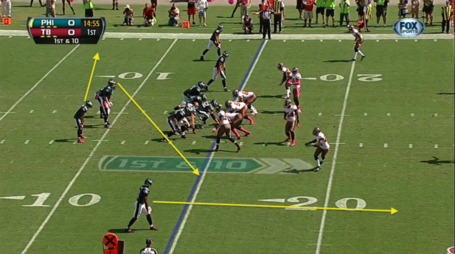 Lesean is going to be able to sneak out of the backfield and the Bucs call the perfect play to get burned on: 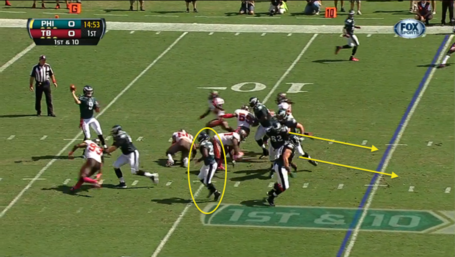 And perfect execution on the blocks: 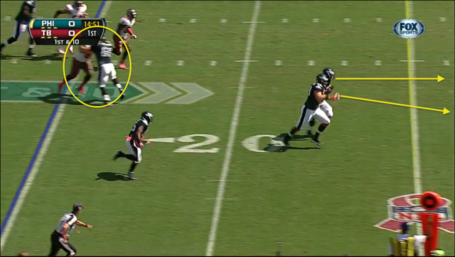 Later in that game, we run the exact same formation. But there are major differences. Pre-snap, it looks like the same play (I should mention, this was actually the 3rd time we ran a play out of this exact formation including motioning Desean out of the backfield. On that play, which I do not highlight here, we ran the exact same screen as above). 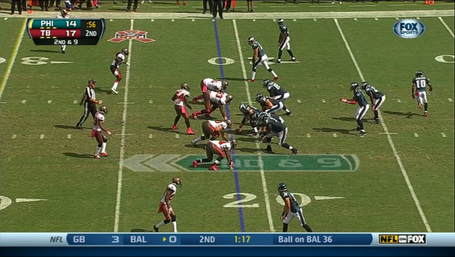 So the Bucs have seen this look twice already, right? However, this time, the read-option is on and there are a number of conceivable options in play. At the mesh point, you see we leave the DE at the top of the screen unblocked. One can imagine the following set of options:

1) If Foles likes his numbers at the top pre-snap, and the DE crashes down the line, he can throw the bubble screen to Desean. This option appears to be here, but Nick doesn't take it.

2) If the DE stays wide to keep Foles honest, Nick can hand it to Lesean. This in fact the option he chooses

3) Of course, depending on how hard the DE crashes down, Nick has the option to keep the ball and run himself in the vacant area (more likely packaged play for Vick).

4) The last option, might be a little out there and is potential the most exotic for NFL football. Note we have already put on tape a formation that has Lesean and Desean in the backfield. Every time we've run it, Desean motions out of the backfield. Therefore, the next time a defense sees it they'll expect Desean to motion out. But maybe he stays put and Chip unveils something we haven't seen yet the straddled triple option. It's best to follow that link and watch the Fishduck video to get a full appreciation of that play...but essentially, it's taking option #3 above but having a double speed option to the top of the screen. Here, after Nick chooses option #3 to run the ball, he now potentially could have Desean running with him for a 2nd pitch option if the defense crashes hard to stop Nick (or Vick) on the run. Here are the reads in pictures (not including #4): 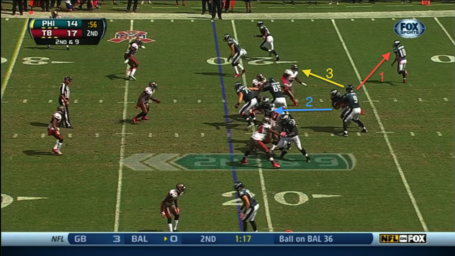 Just to complete the discussion here, let's take a look at one more play. It's the exact same formation as discussed above. Except a key personnel change. Instead of Desean and Lesean in the backfield, we have Lesean and Bryce Brown, two RBs. Not surprisingly, we see Lesean motion out of the backfield pre-snap: 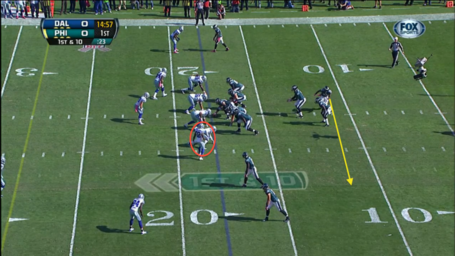 Again, the read-option is on and Nick basically has the same set of reads as mentioned above. The read this time is Scandrick on the edge highlighted in red above. If he breaks hard on the run, Foles has a 3 on 2 match up to the emerging bubble screen on the bottom. If Scandrick stays wide to cover the motioning receiver, it's a run to Brown. On this play, Scandrick blitzes and Nick quickly throws to Lesean at the bottom of the screen for a nice gain: 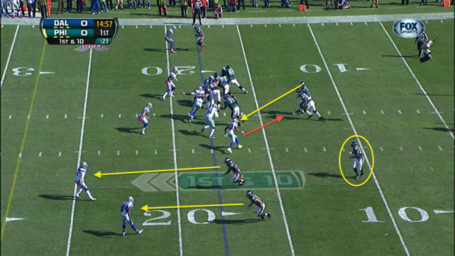 One more time, same formation, same play, same personnel. This time the read is on Sean Lee. Same principle applies. He stays in, they go the bubble to Lesean. He reacts to the motion, they hand-off to McCoy. 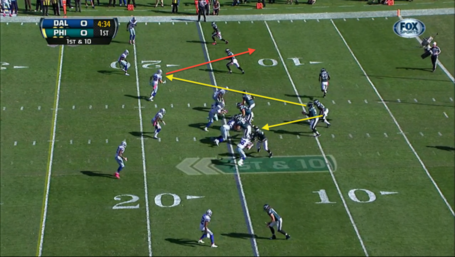 Here, we see Lee leaks out, and Foles hands to McCoy: 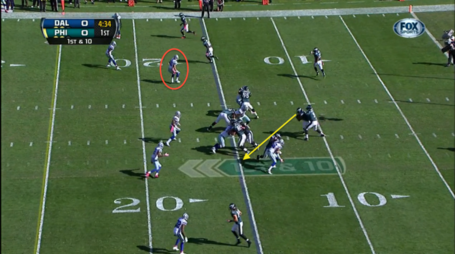 So as you can see, through a variety of personnel packages and formations, very similar concepts are applied thanks to screens, packaged plays, and read-option components.

It should go without saying that most of the elements I've shown here to today were almost completely transplanted from the Oregon offense. If you go back and watch some Oregon games, you will see very similar plays and formations.

And oh yeah, keep your eyes out in the coming weeks for that straddled triple option!