On the road to Nicktory!

Well, that was fun. Sorry for the late entry this week as I was in Tampa Bay for the Eagles' 31-20 win over the Buccaneers. Since the trip was a personal visit for the weekend, I was not close enough to a computer on Sunday to type up my report card. After thinking about the glory of a game during a five-hour car trip home to South Florida, I have a ton to say about the quarterback position, the defense and the coaching staff.

The Week 6 matchup between the Buccaneers and Eagles featured many highlights, the least of which was the best collectively coached game by Chip Kelly and his staff. The Eagles attacked the Bucs with timely deep throws and abused the slower Tampa Bay defense with screens. The defense looked to be in the right spot for the most part with pass breakups, holding up against the run and keeping Tampa Bay to just 20 points.

This was a team win. Frankly, I was impressed by how fluid and multipurpose the offense was for most of the game. Cornerback Bradley Fletcher was terrific in coverage and defensive end Cedric Thornton is continuing to prove he was a tremendous diamond in the rough. Oh, and then there was Nick Foles...

Here are some stats from Foles' performance on Sunday:

*Foles connected with Riley Cooper for 120 yards and a touchdown, that is four more yards than wide receiver had in his entire rookie season.

*Foles is the first Eagles quarterback to throw multiple touchdowns in one game to former Pro Bowl wide receiver DeSean Jackson. The quarterbacks that Jackson has played with are Donovan McNabb, Kevin Kolb, Michael Vick, Vince Young and Foles over six seasons.

*An Eagles quarterback has not thrown for three passing and a rushing touchdown since Week 10 of the 2010 NFL season against the Redskins. Update: Thanks to our friend ghillfootball for the correction, Vick went 20-of-28 (71%) for 333 yards, four passing touchdowns and two rushing touchdown in that contest. #lolskins

*Foles was the quarterback during one of LeSean McCoy's most well-rounded performances of his career. For the first time in his five-year career, McCoy had more than a 100-yards rushing (116) and 50-yards receiving (55) in a game. 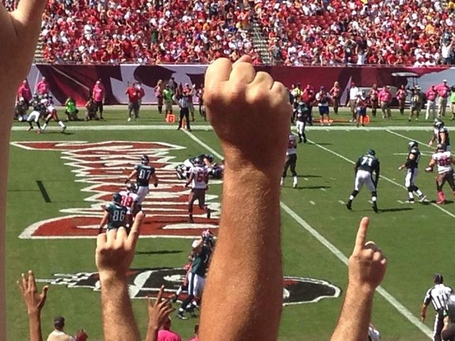 What did you notice during Sunday's game? Tell us what you thought was "hot" and what was "not."