So you've hired Andy Reid: A guide to "Big Red"

Congrats Chiefs fans, Andy Reid is your new coach. Here's what to expect.

Share All sharing options for: So you've hired Andy Reid: A guide to "Big Red"

Earlier this week, I did a Q&A with Arrowhead Pride where I spent a lot of time talking about where things went wrong with Reid in recent years. I'm not going to do that here. So if you're interested in hearing about that, definitely go check out the previous piece.

What I want to do here is explain more about Reid's methodology and how he views the game.

First and foremost Reid sees the NFL through the prism of the pass. He believes it's a passing league and that success comes from throwing on offense and stopping the throw on defense. When you look at the game through Reid's eyes, you can understand where he puts his emphasis.

How do you go about stopping the pass on defense? You rush the passer and you play coverage. So it stands to reason that Reid invests his defensive resources on pass rushing defensive ends and good corners. If you look at some of Andy Reid's biggest free agency expenditures, they're almost all in these categories. He spent mega bucks to go get Asante Samuel & Nnamdi Asomugha, traded for Dominique Rodgers-Cromartie and spent high picks on Lito Sheppard & Sheldon Brown. He's also spent big money on free agent pass rushers like Jevon Kearse, Jason Babin and spent first round picks on guys like Jerome McDougle and Brandon Graham.

Don't expect a lot of investment in LBs and safeties. The Chiefs are lucky in that they already have a good safety in Eric Berry, much like the Eagles were lucky to already have a safety named Brian Dawkins before Reid arrived. The only safety of note Reid has been able to find himself was Quintin Mikell who he got lucky with as an undrafted free agent. The LBs have been a revolving door for nearly Reid's entire tenure. Virtually no top picks have been used on LBs.

On offense, it's not quite as obvious but there are a few Reid hallmarks. First and foremost is the offensive line, because you've obviously got to protect the passer if throwing the ball is how you win. One of his very first moves when he came to Philadelphia was to jump into the free agent market and make Jon Runyan the highest paid offensive lineman of all time (at the time). He's since spent a pair of first round picks on the line, as well as traded a first round pick for Jason Peters and paid him big money too. So expect heavy investment on the line. 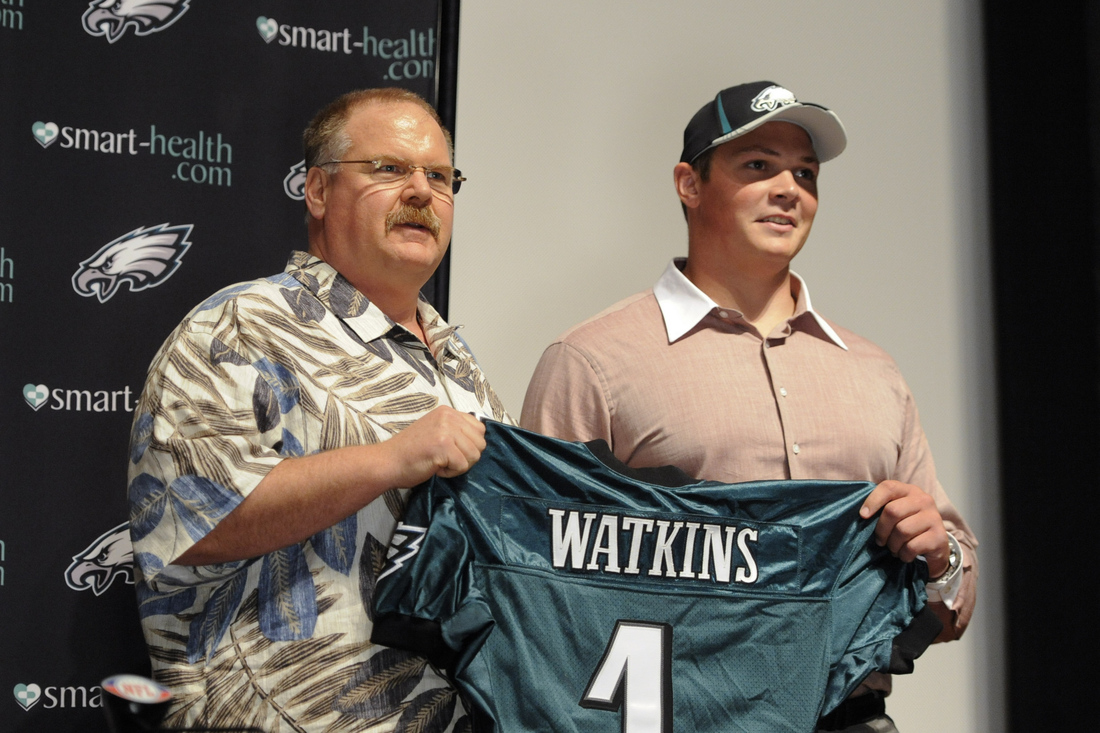 Obviously QB is the other major factor in building a passing game and Reid has certainly always invested there to some degree. Obviously drafting Donovan McNabb with his first ever draft pick meant he didn't have to invest all that much at the QB position in the following years, but he has had some levels of success stocking the team with young arms. None of these guys have ended up being particularly good QBs, but he has had some success with them and turned them into value later. AJ Feeley had a decent 6 game stretch here once and Andy turned that into a 2nd round pick. Kevin Kolb played only a couple games, but was flipped for a 2nd rounder and DRC.

I would bet a lot of money on whichever guy Andy uses your #1 pick on to be an offensive tackle or a QB.

As for WRs, Andy has always had a complicated history. His first probably 4 years here were just a parade of so-so guys, which was baffling for a guy that called as many passes as he did. But if you look back at the overall body of work, it does seem like he has tried to stock the team with good WRs, to varying degrees of success. Obviously the most notorious move was the trade for Terrell Owens, which worked out spectacularly for one year and was a spectacular disaster the next. He spent a first round pick on Freddie Mitchell, who was a bust, and one on Jeremy Maclin, who is hardly dominant but a good player. He spent second rounders on Todd Pinkston, bust, & DeSean Jackson, hit.

So his record of success with WRs is spotty and his desire to find quality ones is somewhat suspect given that he runs a pass first offense.

As for running backs, Andy has never invested a top pick or big free agent money in the position. And why would he if he sees the game through the prism of the pass? Despite that, he's brought in some damn good RBs in time here. He picked Correll Buckhalter in the 4th round of the 2001 draft, Brian Westbrook in the 3rd round of the 2002 draft and LeSean McCoy in the 2nd round of the 2009 draft. So he's really always had good backs, despite never spending big to get them.

I remind you that he sees the game through the prism of the pass. So on defense, everything is predicated on getting to the quarterback. In the Jim Johnson era, that was accomplished through constant blitzing. Johnson was a master of the blitz and not only knew when to call them, but excelled in hiding where they were coming from and confusing QBs.

After Jim Johnson passed away, one of his protoges, Sean McDermott, took over and tried to keep up the blitzing but never showed the same kind of nuance Johnson had. As a result, the Eagles were burned on blitzes through the air and on the ground time and time again. Reid or McDermott had no plan B.

After McDermott, Reid hired Jim Washburn to bring his "wide 9" to the Eagles defensive line. He then reportedly offered the coordinator's job to Dick Jauron, who turned it down because he didn't want to work with the wide 9. (Perhaps hiring a position coach that would dictate what the defense did before the coordinator was even hired was a mistake in hindsight?) He then tried to pry Todd Bowles away from Miami, but they refused to give him permission. Eventually, he settled on offensive line coach Juan Castillo as his defensive coordinator.

Things were really a mess from there on and took Reid's view of defense to it's scary conclusion. He had big money corners in place (Samuel, then Asomugha), he had good pass rushers in Babin & Trent Cole and he had a scheme that let them loose after the QB on every play. Only it didn't work. Time and time again teams would run in the huge gaps created by the wide 9 and not filled by the group of undrafted free agents or whoever else happened to called on to play LB that week (I'm not kidding about that either, there was that much turnover). Or they would just ride the wide rushers out of the play and burn them with the pass.

But again, with Jim Johnson, the philosophy worked. 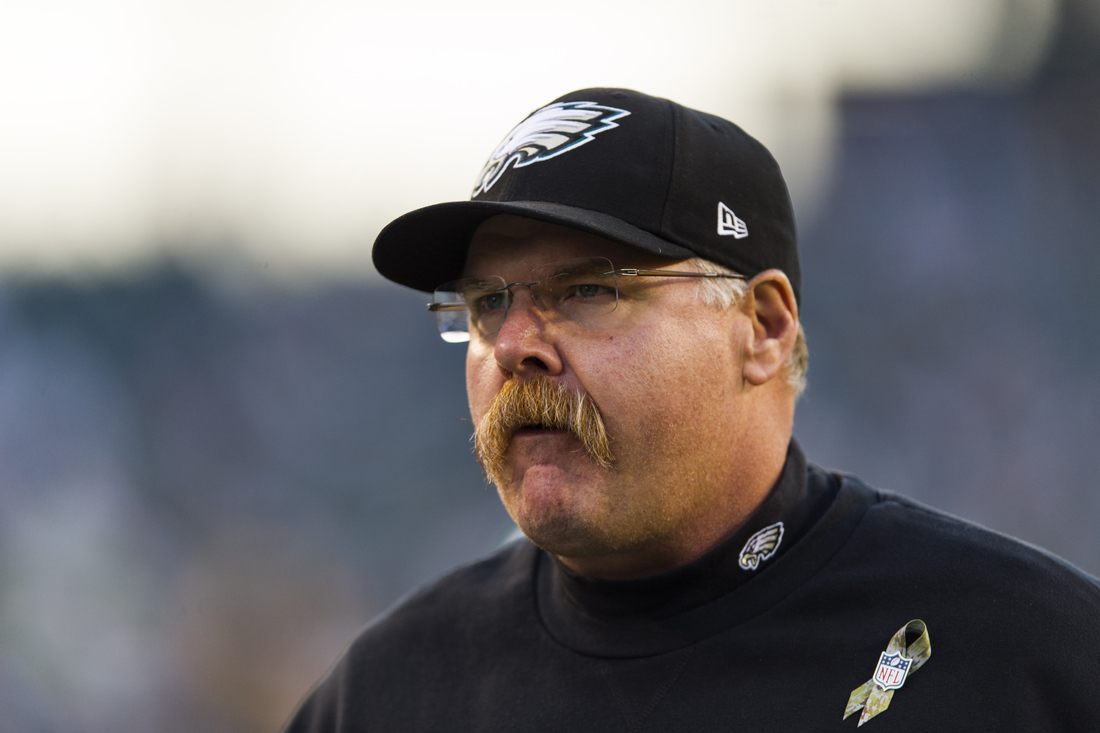 On offense, obviously be prepared for a lot more passing than you are used to. Andy likes to throw. Part of the core west coast offense philosophy is that short passes are basically just like runs. So while he may not hand it off 20 times a game to a back, he'll say that you threw some screens or quick slants and got the same effect. Is that true? That's for you to judge. RBs do catch a lot of passes in his offense though, so be prepared for Jamaal Charles to reasonably get 70+ targets next year. And he better be ready to pass block. If you're a RB in Reid's offense and you can't pass block and catch passes, you don't play.

Andy hasn't stuck to all of the core WCO principles. His offense has become more vertical than more traditional west coast schemes and he's always favored speed in WRs over size. He wants to hit guys on shorts slants and let them run with the ball or he wants to hit them over the top of the defenses. The big, move the chains, red zone type of WR has just never been what he's looked for.

Gimmicks. Get ready for them. I don't quite know what it is with Andy, but he's always wanted to try to be trickier than he really is and if he has success with a trick once, he'll use it time and time again. Two cases in point. The flea flicker. This worked like one time here and he's since used more than maybe every other team combined. It may have only worked that first time.

End arounds are another. There is not an Eagles fan alive when that doesn't groan when they see the Eagles running an end around motion. They do it so often that no defense is ever surprised or caught off guard. They did it so often that Reid's solution at one point became to run fake end around motions. Of course, then you're just slowing down the whole play and basically taking one of wideouts out of it. He should really just lose the end around from the playbook. Seriously Clark Hunt, if the ink isn't dry yet, write this on the margins of the contract.

Having said all that, here's what the philosophy boils down to. Throwing is the answer to your problems. I guarantee you'll hear Andy say this in the next year, "keep firing." That's his philosophy. If the pass is not working, you don't give up... you keep firing.

You pass early to get a lead so you can run later to keep it. If you don't get a lead or you fall behind... you keep firing.

And while this may sound bad, let's not forget the facts. Andy's offenses have scored a lot of points. They were 8th in ppg as recently as last year (2011). They were 3rd in 2010. 5th in 2009. 6th in 2008 and so on. Situationally, you will question whether his philosophy makes sense. I certainly do... But when you step back and look at the big picture, they score points.

Andy is a player's coach. You'll almost never hear him call a player out and he'll always take the blame on himself. He shows very little emotion on the sidelines or in the press room. He's a nice guy with a jovial personality, but for the most part his press conferences will the be the most boring thing you hear in a given week.

That's how he deals with the media. He bores them to death. I'm not joking. He doesn't fight with them, he doesn't take their bait, he doesn't try to charm them or be their friend. He says what he plans to say and then he just waits them out. How many questions can you ask and get "I'll have to look at the film" or "we'll have to work on that" as a response before you just give up?

Expect to move around on draft day, a lot. Andy doesn't like to sit still. Whether it's trading back to acquire more picks or moving up, he's very active on draft day.

Learn to love big men as top picks. Andy Reid has made 14 top picks. 9 have been offensive or defensive lineman.

Oh and on draft days, he wears giants Hawaiian shirts.

So there's Andy Reid, a guide. Best of luck and enjoy.

As Andy says when he's ready for questions... "Time's yours."