Projecting The Eagles Next 4 Cuts

Share All sharing options for: Projecting The Eagles Next 4 Cuts

That means there four more cuts to make, which a quick look over the roster says won't be terribly hard to guess. Getting from 75 to 53 should be significantly more difficult. My guess is that the next four out come from this list.

Guys like Lindley or Hamler could survive just out of need for bodies for that final preseason game. Then again, the team could always give the likes of Damaris Johnson, Marvin McNutt and Brandon Boykin extended time against the Jets. Of course, when rookies have never even played a 16 game season there's some logic in giving them a break if they're going to be expected to be contributors this season.

After the jump, is notice of termination that players are supposed to get under the CBA when they are cut. Kind of harsh! 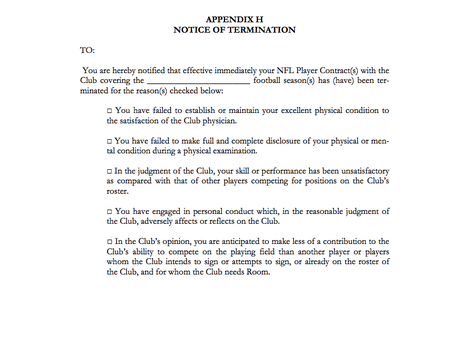