Share All sharing options for: Nick Foles Is Better Than Andrew Luck

This story about Andrew Luck's crappy drawing of Lucas Oil Stadium selling for thousands of dollars on ebay made its way around this week. Luck's sketch was part of a card company's idea to have a whole bunch NFL rookies draw their own rookie cards.

The company, Panini America, who apparently does make cards and not sandwiches, also asked Eagles QB Nick Foles to draw one. While it's no masterpiece, it's clearly superior to Luck's. 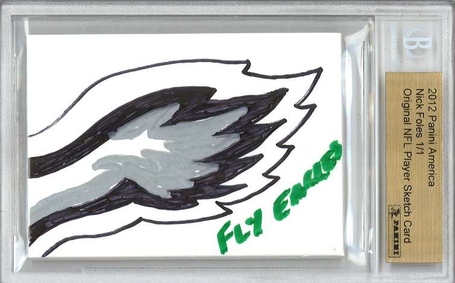 Foles and Luck have actually had remarkably similar preseasons in terms of stats. Both are completing 63% of their passes and have thrown for a tick over 360 yards. Foles' league high QB rating of 118.4 does beat Luck's 87.8.

Despite the superior artistic ability and better preseason QB rating... I highly doubt the Colts are having any regrets about taking Luck over Foles...

In other crappy rookie art news, Robert Griffin drew a tree or got some 5 year old to do it for him.