Share All sharing options for: DRC Fined $21K For Hit On Leftwich

The NFL's hand of justice was not particularly swift this time (took over a week), but it did come pretty hard on Dominique Rodgers-Cromartie. The Eagles CB was fined $21,000 for his "dangerous" hit on Steelers QB Byron Leftwich. $21k is actually the minimum fine in this situation and makes for about 1% of what DRC will earn this season.

DRC told Sheil Kapadia that there was "no doubt" it was a clean hit. However, this NFL.com photo seems to dispute that. Also, see it in gif form for more context. 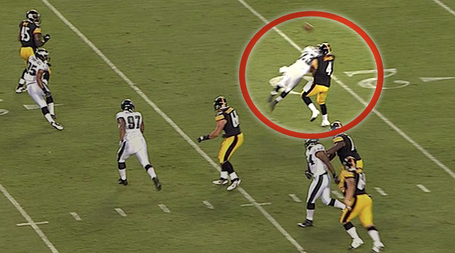 He's left his feet and he's going high on a QB who has just thrown the ball and is therefore defenseless... There's really not much to even debate here. Even if you don't like the NFL's focus on these type of hits, there really can't be much debate that this is the kind of hit that's going to get you fined. The players have all seen videos from the league office with examples of illegal hits and this one is almost as textbook as you can get.

As much as we want to see guys playing hard and punishing the opponent, if its not done within the rules then it defeats the whole purpose. This particular play extended a Steelers drive that should have been over.