This is the first in a new series we'll be doing here on BGN written by John Breitenbach (@PFF_John), who is a big Eagles fan and best known for his work on Pro Football Focus.

The expectations placed on Nnamdi Asomugha after arriving in Philly were probably unrealistic but most would still admit he had a poor year with the Birds. Numerous theories of why he struggled have been suggested; he was playing out of position, he wasn't allowed to play enough press coverage and he was forced to play too much zone. I broke down his targets to see if there was one particular area he really struggled.

Let's start with playing inside. All the talk last offseason was about how Asomugha would be used in the "Charles Woodson" role. The plan was to use him a lot in the slot and have him free to roam and make plays. While that didn't quite happen, Asomugha was reasonably effective in coverage inside. He allowed just 11 of 18 targets to be complete for 123 yards, an interception and a pass deflection. Not bad at all. It wasn't his performances in coverage that showed him unsuitable for the role but his soft play. He missed five tackles when lined up inside and failed to show the necessary temperament to take on blockers on run plays. 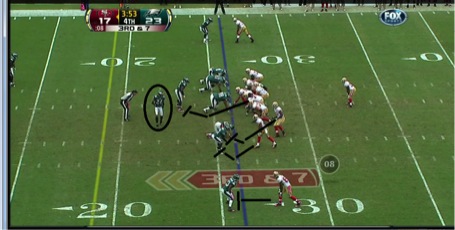 Here's a 49ers run play at a crucial time in the game, down by 6 with four minutes to go. 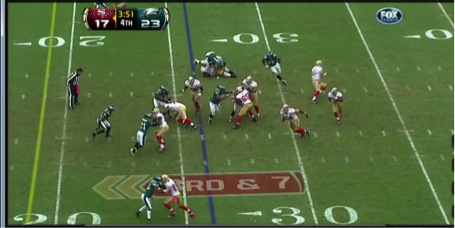 Look how unwilling Asomugha is to come up and take on the LT who is lead blocking on the play. 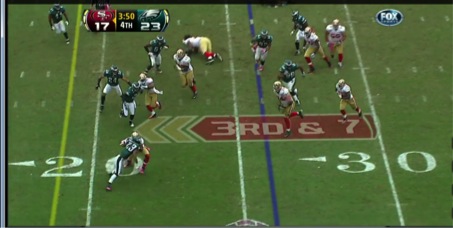 If he steps up and takes on a block earlier, he gives both Patterson and Chaney a much better chance to make the play. 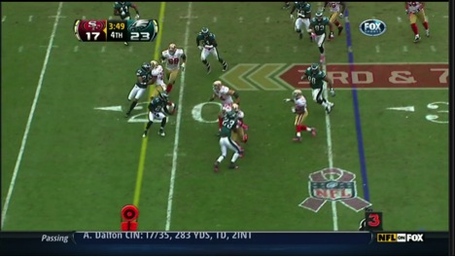 Whether it was inside or outside, it was clear Asomugha struggled in zone. He was targeted 13 times, allowing 11 completions for 162 yards and a pick. The former Raider showed a general lack of awareness, often times finding himself out of position. He had a tendency to be drawn up by underneath routes, leaving gaping holes behind him. 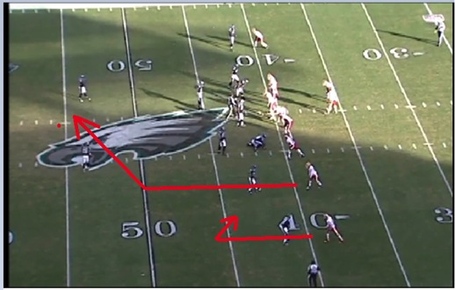 The Eagles are in zone coverage and Asomugha is tasked with covering an underneath zone. Sanatana Moss is going to run a deep in while the outside receiver runs a button hook. 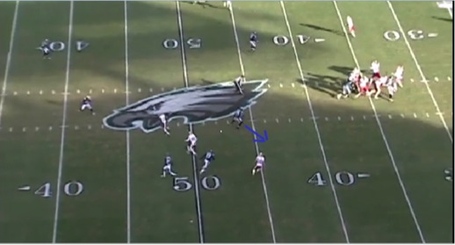 Driving on the hook route leaves Santana Moss wide open behind him. 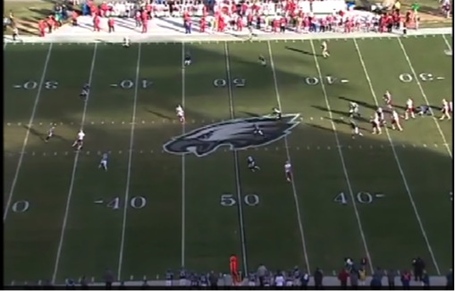 Finally, looking at his performances in man coverage, Asomugha's clearly more comfortable when able to press. He gave up three plays of 20 or more yards and a pair of touchdowns when forced to play off. Both the Giants and 49ers used motion to prevent Asomugha from using his preferred technique, leading to big plays. In contrast, he held opposing receivers to just 11 receptions on 22 targets for 125 yards when pressing. Asomugha did give up a few plays but nowhere near as frequently.

Victor Cruz short motions to get off the jam and ends up with a 28 yard touchdown.

I'm not trying to suggest Asomugha's a bad player; in fact he's clearly a very good press cover corner. The problem is that he's very one dimensional, which restricts the plays Juan Castillo can call, and can make it difficult to disguise coverages. It was probably a stretch predicting Asomugha would be able to adapt so quickly (without an offseason) when he had almost only played on the outside during his time in Oakland. He should play better in 2012 with the Eagles looking to use more press coverage and the time to learn the nuances of zone coverage.