Former Eagles C Jamaal Jackson had a tryout scheduled with the New York Giants today, but after one day he decided to cancel it and retire. He told Tom Coughlin that his heart just wasn't in it.

Jackson came into the NFL as undrafted free agent out of Delaware State in 2003 and spent 9 seasons as a member of the Eagles, making 72 starts over that span.

He got his chance to start in 2005 when Hank Fraley went down with an injury 8 games into the season. Once he got the starting job, he did not let go and started every single game for the Eagles for the next 3 seasons. He had also started every game in 2009 until he tore his ACL in week 16. He would only ever play one more game in his NFL career.

Jamaal was a great guy and a great Eagle, so I believe all Eagles fan will wish him the best and look back on his career here fondly. Interestingly enough, Jamaal was one of the few offensive lineman ever to get on the cover of Sports Illustrated, when the magazine did a feature on training camp battles and highlighted his competition with Hank Fraley in 2006. 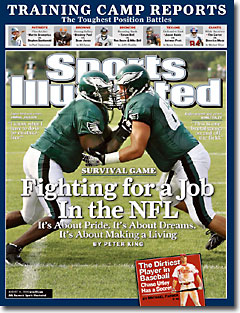