The Eagles are already one of the greenest teams in sports, both literally and figuratively, but by the end of this year they will have taken their environmentally friendly approach to a new level. They've signed a deal with NRG to outfit Lincoln Financial Field to operate almost entirely on renewable energy. The project is expected to be done by the end of this year.

NRG will design, build and operate a unique, integrated sustainable energy solution including solar panels and micro wind-turbines that together will provide annually about six times the power used during all Eagles home games.

The picture above is their rendering of what it will look like. The Eagles have long had a commitment ti "being green." Anyone who has been to a game has probably seen their efforts to encourage recycling at the stadium.

"We believe that companies everywhere can find ways to Go Green with business practices that help the environment and the bottom line," said Jeff Lurie.

We've got more on what the system will actually be after the jump.

The Eagles had previously agreed to make the Linc energy sustainable with an all wind turbine system, but NRG's solution will combine wind power with solar.

The comprehensive system includes the largest solar power system in the NFL and in the Philadelphia area, with more than 11,000 solar panels and three megawatts (MW) of generating capacity. Solar panels along 11th Street and the south façade of Lincoln Financial Field will generate power and visually demonstrate the Eagles' and NRG's commitment to renewable power. Fixed solar panels in the parking lot will generate the bulk of the clean, renewable power that will help run the stadium all year long.

Fourteen micro wind-turbines will be placed along the top of the stadium on the north and south sides. The new clean power equipment is positioned in a way that will not interfere with the fans' enjoyment of the Eagles' home games. 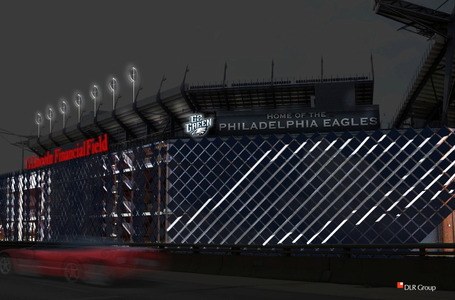