Andy Reid did everything as head coach of the Eagles but win a Super Bowl and that failure will define his era.

Share All sharing options for: Andy Reid fired: Lack of a title will define Reid's legacy

Andy Reid was has head coach of the Eagles for 14 seasons, making him the longest active tenured head coach in the NFL and the 4th longest in all 4 major US sports. Over that time, Reid won 130 games, the most in team history, made it to the playoffs 9 times and was named NFL coach of the year on 3 occasions. He won 10 playoff games, reached 5 NFC championship games and 1 Super Bowl.

There is literally just one hole in his resume. A Lombardi trophy.

The fact that Andy Reid failed to win a Super Bowl will define his legacy in Philadelphia. That doesn't mean he was a failure or it was all for nothing... But we can't deny that in sports the championship what ultimately cements your place in the lore of a city's history.

Had the Flyers' "Broad Street Bullies" teams of the 70s not won those 2 titles in the early 70s, that nickname may not even be in our collective lexicon. Bobby Clarke doesn't become the general manager of the team for years. Guys who weren't even stars on that team would actually have to pay for drinks in the metro area. Those championships turned those guys and that team into deities in this city. There have been other really good Flyers teams since then, but the difference is that John LeClair isn't getting hired to make appearances at local auto dealerships. No, that's reserved for those guys on the 70s teams because they won the championship. 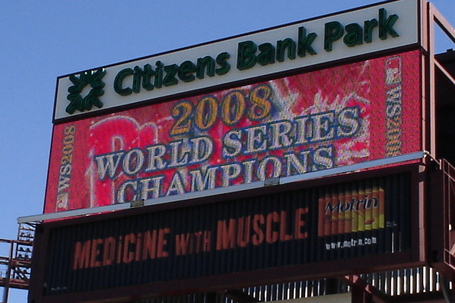 How differently would we view this current golden era of Phillies baseball had they not won the title? A lot, believe me. They would be a disappointment, a big one actually. But even if that core of guys never wins anything again, what they did in 2008 will be forever woven into the fabric of Philly sports history. If you ask any Philly sports fan in 20 years what Chase Utley said at Citizen's Bank after the parade, they'll all reply "World Fucking Champions." Do you think they'll be able to do the same thing with what Dawkins said after the 2004 NFCCG? Not most of them.

The Phils made the World Series in 1993, but if you go to the ballpark these days, you're not going to see Lenny Dkystra or Curt Schilling jerseys. If you go to the ball park 10-15 years from now, I bet you'll see Utley, Howard, Hamels & Rollins jerseys. That's what winning the title does for you.

I can make the same comparison between the early 80s Sixers squads with Julius Erving & Moses Malone versus the Iverson era Sixers.