The Eagles dropped their 4th straight in a 28-13 blowout loss to the Saints on Monday Night Football.

The sharks are circling, the wolves are at the door... The Eagles dropped their 4th straight Monday night with a 28-13 blowout loss to the Saints and the probably of Andy Reid returning as head coach continues to grow smaller.

Much like last week against Atlanta, this was not a game where you could point to any one thing as the problem. It was evident once again that this Eagles team is rotten from the core. That said, let's start with the offense.

If you really want to grasp just how spectacularly bad the Eagles offense has been this year, look no further than their performance in goal to go situations tonight. They had 1st and goal 4 different times in this game and came away with -1 points. The first resulted in a pick 6, the next 2 ended in field goals and the 4th ended with a fumble.

If that doesn't truly encapsulate how awful the Eagles red zone offense was tonight, take a look at the sequence of plays in their last goal to go situation.

What really can you say about that? Here's another awful stat to chew on. The Saints entered this game with the worst overall defense in the NFL and yet they limited the Eagles to just 13 points.

But I don't want to just pick on the Eagles offense. No, that wouldn't be fair to our heroes on the defense. The Saints entered this game with a rushing attack ranked dead last in the NFL and yet they racked up 100 yard rushing before the end of the first half. Drew Brees was pressured very little in the game and as a result made picking apart the Eagles defense look very easy. Nothing tonight, however, was easier than the time Jimmy Graham had against the Eagles safeties. With Nate Allen out injured, Graham picked on replacement David Sims, who was playing in his first NFL game, all night.

Just to round out the total team effort in the loss, the special teams did their part as well. On a kickoff return, the Eagles had a trick play on that saw Riley Cooper literally hiding on the opposite side of the field from Brandon Boykin. 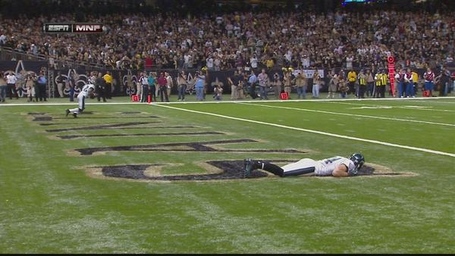 Cooper would jump up, Boykin threw across the field to him and Cooper took it to the house. Only, a replay showed the Boykin had clearly thrown the ball 3 yards forward, which isn't legal, and the play was called back. Instead of a TD, the Eagles offense was pinned inside their own 5. It was a mistake and an example of more poor execution from this team, but I suppose you have to credit special teams coach Bobby April for at least trying something.

LeSean McCoy was a bright spot for the Eagles carrying 19 times for 119 yards. DeSean Jackson caught 3 passes for 100 yards and a TD. It was a very typical DeSean TD, where he caught a pass in space and then made a defender just look silly with a very subtle little juke move.

Jason Babin still got the majority of the snaps at LDE, spending most of his night getting blocked out of the play on runs or trying his spin move to nowhere... But when Brandon Graham got a chance to play, he strip-sacked Brees in the red zone and recovered the fumble himself. Please make this man a starter.

Final note on injures. Todd Herremans went down with what the Eagles are calling an "ankle tendon strain." He landed very awkwardly on it and it twisted in a very unnatural way. He was in serious pain on the sideline before being carted off the the locker room. Already down so many starters on the line, Demetress Bell was pressed into service at RT and just had one of the most shocking games you will ever see. When he wasn't committing a penalty, he was allowing a free rusher in on Michael Vick. At one point Jon Gruden was basically pleading for the Eagles to get him out of the game, which they might have, but they literally did not have another body on the roster to put in. The only backup OL left was Matt Tennant, a center they signed about 2 weeks ago.

If there is one guy that deserves to be straight up cut this week. Like, get off this team you don't belong here cut... It's Bell. Tonight was an embarrassment and there was no one worse than him.

This is 4 straight losses for the Eagles who fall to 3-5 on the year. They face the also 3-5 Dallas Cowboys next week at Lincoln Financial Field.