After 2 injury filled seasons to start his career, the Eagles former 1st round pick is finally looking like the player he was projected to be.

There's been a lot of concern surrounding Brandon Graham since his drafting in 2010. A number of people were (unfairly) disappointed with him in his rookie year, despite the fact he got consistent pressure. He may not have had good sack numbers but he showed an ability to consistently beat the tackle in front of him, even if he didn't bring the quarterback down. The main issue with Graham then was his poor run defending, which often exposed the linebackers. Fast forward three years and the Michigan man looks to have to have gotten even better as a pass rusher as well as improving against the ground game. Let's take a look at his stats and a few individual plays.

Now obviously the sample size is small but Graham has been simply ridiculous when it comes to rushing the passer. Effecting the throw on 14 of 52 dropbacks is absurd. Also one of the two players beating him at the moment has played just three snaps and it's hard to judge much from that. Graham did get the advantage of facing rookies early in the year but it's not just weak opponents he's been getting the better of, as guys like Gosder Cherilus and Tyson Clabo have found themselves losing battles to him. If anything it's the consistency that's been so promising, in seven games he's yet to be shut out despite playing as few as four, nine and ten snaps.

Here's one of only four snaps Graham had against the Browns, he's lined up at left defensive end. 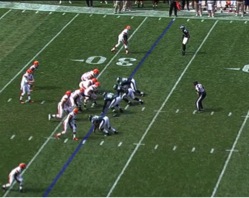 He gets a nice initial punch on Mitchell Schwartz, rocking him back. 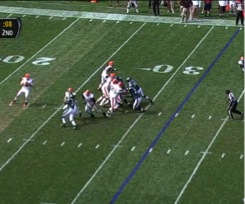 Despite being double teamed by the right guard, Graham is able to disengage and get the hit on Weeden. 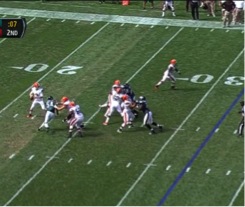 This play is perhaps even more impressive, as he makes Bobby Massie look silly. 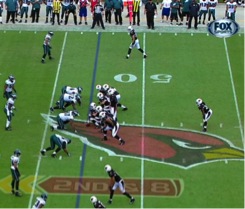 Here he engages with Massie. 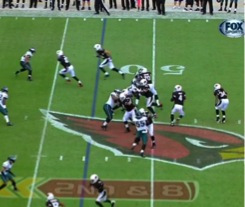 And then sheds him in no time at all. Notice where the RT is in the screen above compared to below. 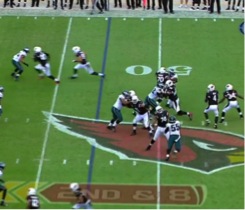 And then he gets by with the running back barely touching him for the sack. 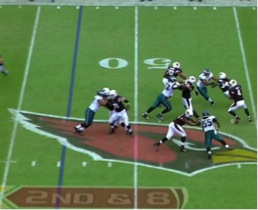 Finally here's Graham against one of the better right tackles in the league in Tyson Clabo. 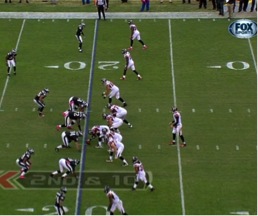 He gets a good jump and contacts Clabo at the 24 yard line. 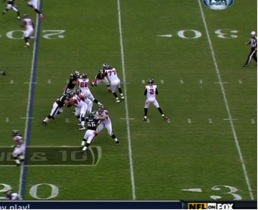 And drives him four yards deep to the 27 (Graham is by the right hash), where Matt Ryan is forced to escape the pocket. 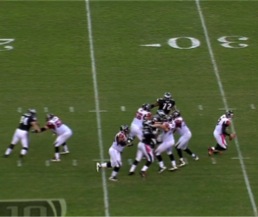 Again sample size issues apply but that is some impressive play. Although his run stop % of 15.9 is seventh, it's second of players with at least 25 snaps. The one thing that really stands out with Graham when he's defending the run is his strength. Even when guys lock on, he uses his hands exceptionally well to generate leverage to disengage. The one issue is he occasionally loses backside contain, because he's too eager to make the play, but even that doesn't happen very often. Let's take a look at some plays.

Here he is facing a pull block from the opposite side of the formation, a play that tends to work against the Wide 9 front. The outside tight end is going to come across on this play. 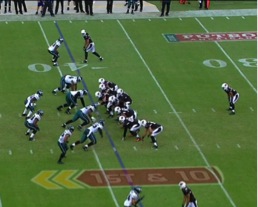 The tightend looks to force him outside ... 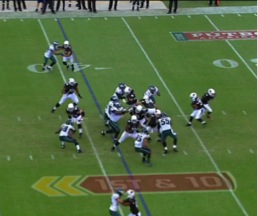 But Graham's having none of it and sheds the block to make the play. 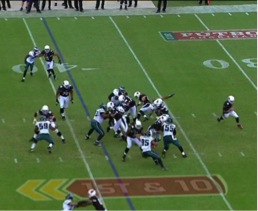 Here he is again beating Clabo. 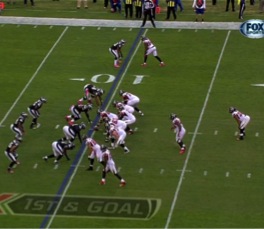 Graham makes a quick move to the outside in the backfield. 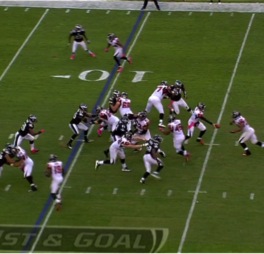 Graham is then able to shift his momentum and get back towards the LOS to make the play. 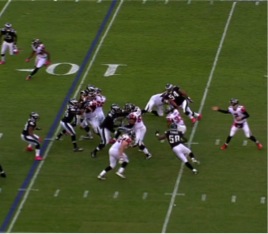 Graham's start to this season has been simply amazing. The numbers are probably unsustainable, considering he's likely to get more snaps, but if he can be simply close to them he'll be near the top of the league amongst starters. After a good few games at the beginning of the year, Jason Babin has really cooled off, while Philip Hunt has failed to recreate his previous form. If the Eagles can't right the ship quickly, Babin should be concerned about keeping his job because the man behind him has taken his game to another level.