You thought Asante Samuel was soft and allergic to tackling? That's nothing compared to what you are about to see right here.

I went into my usual breakdown of the Eagles game with a few ideas in mind, most notably to analyze every throw Nick Foles made in his first start and see if any of the Eagles quit late in the game. What I ended up noticing was staggering. I couldn't believe it with my own eyes.

It looked like Nnamdi Asomugha quit on a few running plays in the fourth quarter. Then I went back to earlier in the game and watched his every move on first, second and third-quarter rushes. Then I went back and started watching him against the Giants, Ravens, Steelers and Falcons. When all was said and done, I must have kept my eye strictly on Asomugha for somewhere around 100 running plays. And I was disgusted.

Nnamdi Asomugha is nothing more than Asante Samuel reincarnated. Worse even. At least Asante had the courtesy of using his veteran tricks (you know, the fake dive at the running back's legs) to make it look like he attempted to tackle opposing ball carriers. At least he ran to the ball, jumped around and made a lot of noise. Nnamdi just dances with his wide receiver, rarely making a fair and honest effort to get off the block.

This is the play that tipped me off:

Here is an option run by RG3 with 12 minutes remaining in the game. Asomugha is matched at the bottom of the picture opposite Redskins wide receiver Josh Morgan. Note the play starts at the Eagles' 48-yard line. 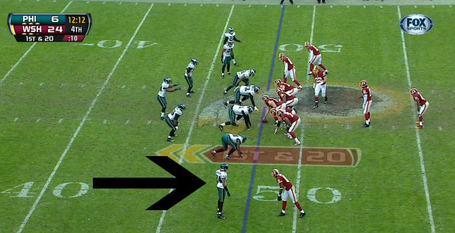 As the play begins you can see Asomugha running with his man downfield as if it's a pass. No problem here. That's his job. 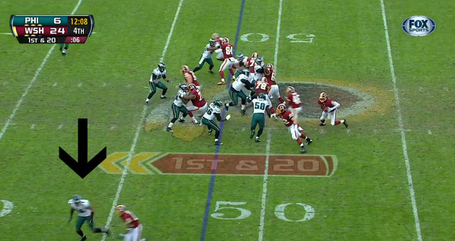 Now here is the next time Asomugha enters the picture. RG3 has already run downfield and out of bounds. That is Asomugha still being blocked by his man AT THE 12-YARD LINE! Note that is 36 yards from the line of scrimmage.

Here's the end zone view of the play. As you can see, Nnamdi isn't (and hasn't) made much effort to get off his block. No wonder RG3 went for a 28-yard gain. 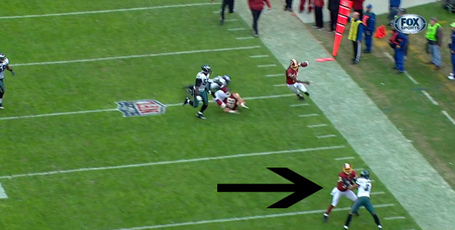 If that reprehensible effort makes you sick, wait, there's more. There's this 20-yard run from Alfred Morris later in the fourth quarter with the Redskins now up 25 and almost no threat of a pass with the game out of hand. There's Asomugha at the bottom of the picture again matched opposite Morgan.

Here's Asomugha being blocked 10 yards downfield, but in position to at least assist in the tackle. 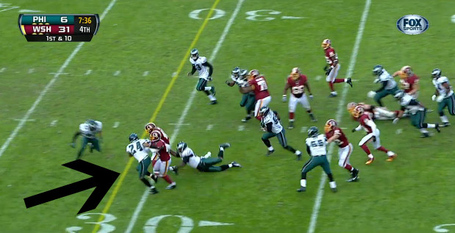 Nope. There's Asomugha still being blocked 20 yards downfield, some seven seconds after the snap. Josh Morgan must be one heck of a blocker for him to keep his man engaged for seven seconds. See the video here at the 2:55 mark.

Naturally, upon seeing these plays I thought Asomugha had quit. Upon further review, this is just his norm. I saw the same type of effort on a regular basis no matter the opponent or the blocking wide receiver.

The $60 million man half-engages the receiver he's covering on most running plays, rarely breaking free from their killer grasps. At times, he's even shied away from contact.

What's happened here is really staggering. Asomugha has done the unthinkable. He's made his cornerback in crime Dominique Rodgers-Cromartie look like a capable and willing tackler against the run, and he's made Asante Samuel look physical.