There are 2 Andy Reids. The affable guy who we all felt a tremendous amount of sympathy for when he lost his son prior to the season... and then there's the football coach, who has been the principle target of the fans' wrath this season.

That dichotomy can be pretty well summed up by 2 signs held up at the Linc this year. One from the first preseason game, where fans expressed support after his loss. 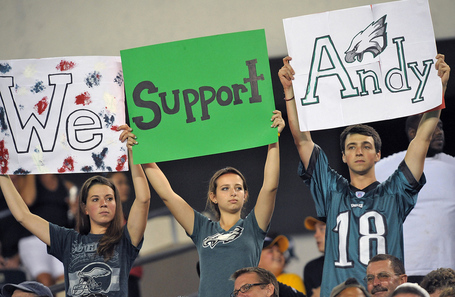 And one from last week, where fans angry about his record levied personal attacks. 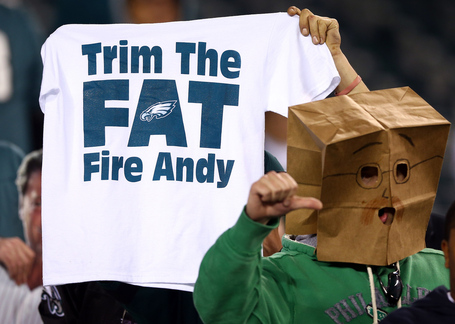 That was pretty childish to mock a guy for his weight, but I suppose we're all guilty of being childish sometimes. Just go ask anyone at Blogging the Boys about me and I'm sure I'll get accused of it... But either way, the latter sign was indicative of the anger we feel toward Andy Reid the coach, while the former shows the affection that a lot of us still have for the man.

Question is, can we separate the two this year? Is what happened to Andy Reid the man this year affecting the performance of Andy Reid the coach? At least one former Eagle thinks so. Winston Justice was a guest of 1070 The Fan in Indianapolis this week and was asked about the Eagles struggles this year.

"(Andy) Reid went through a very hard time losing his son," Justice said. "I bet that has a lot to play in the whole performance of the team. Hope they can pull it together."

That said, Justice also admitted that drama in Philadelphia is hardly new.

"I'm not really watching the games that much but you can't help but hear them going through stuff and I mean every year there is always some type of drama with Philly. "

So what do you think? Does Andy Reid the coach deserve to be excused for the unthinkable tragedy that Andy Reid the man has went through? Or does that not come into your evaluation. If Andy decided to coach this year, can he only be judged on his results?

Eagles vs Redskins: Everything you need to know