The Nightmare, It Continues

You saw it. I saw it. We all saw it. The Eagles invented another way to lose on Sunday and put the final, merciful nail in the coffin for 2012. All that's left is to see if Nick Foles can be the quarterback of the future -- a future that hopefully includes a new head coach.

Share All sharing options for: The Nightmare, It Continues

Rock bottom hit Sunday evening at Lincoln Financial Field, with the Eagles spectacularly imploding in the fourth quarter and handing Dallas the win on a silver platter. It happened in the span of 2:35 from the end of the third quarter through early in the fourth quarter, when all three phases of the team -- defense, special teams, offense, in that order -- utterly failed. Fitting, really.

I started to type out this column Sunday night, complete with the typical sections for "The Good," "The Bad," and "The Ugly." After about ten minutes, I let out a sigh and said, "Fuck this." Then I got a second wind on Monday, sort of. I'm not going to follow the normal format, I'm just going to write. So if this article appears at all lazy, I apologize in advance. I'm just fatigued and over the whole mess that is the Eagles, you know?

LeSean McCoy, coming off a week when he missed two days of practice due to illness, did what he always does. He ran hard, made the most of his opportunities, and churned his way to 5+ yards per carry. Shady also appeared to be getting stronger as the game went along, averaging nearly 9 yards per carry in the second half -- on just seven carries. Instead of feeding his bell cow, Andy Reid insisted McCoy looked tired (Shady disagreed) and didn't want to overwork him. Oh, hey, would you look at that, more bullshit. There were various instances throughout the game where the Eagles should have run the ball, but since Andy Reid and Marty Mornhinweg are smarter than everyone else on the planet, they decided that calling pass plays and having Demetress Bell attempt to block DeMarcus Ware -- while King Dunlap commited penalty after penalty -- was a better course of action. I'd continue, but you should just read Ray Didinger's "Eagles Film Study: Coaches ignore ground game." Why Ray didn't add "again" at the end there, I don't know. I hate repeating myself, and that's all I ever do when criticizing how Andy/Marty utilize their best offensive player. I'm spent, and I'm done devoting keystrokes to their idiocy. I just hope that the next coach is smart (and flexible) enough to build the offense around Shady, instead of arrogantly and pigheadedly wasting the prime years of his career because of an insatiable desire to satisfy a bloated ego.

Edit: How about the ridiculous, nonsensical offensive possession before halftime? That couldn't have been more vintage Andy Reid. Too funny. I was kinda rooting for the punt to get blocked, honestly (came close). Can't believe I forgot to include this originally.

Adendum: Can we please start seeing more Bryce Brown? Not only is he a talented and powerful runner, but his adept blitz pickup allowed Foles time to roll out and find Jeremy Maclin for the 44-yard touchdown pass.

It wasn't all good with Shady, though. His post-game quotes about the Eagles being able to "dominate" when things "come together" reaks of last season's interminable delusion. I saw Flight in theatres on Saturday, and Shady's words reminded me of Denzel Washington's character trying to convince everyone he's not addicted to alcohol or drugs while simultaneously chugging a handle of vodka and snorting cocaine. This team's self-perception is so warped and out of whack, it's pathetic. Newsflash: You are what you are -- a bad, stupid team that can't get out of its own way. It's well beyond time to accept reality. After all, admitting you have a problem is the first step in correcting it. 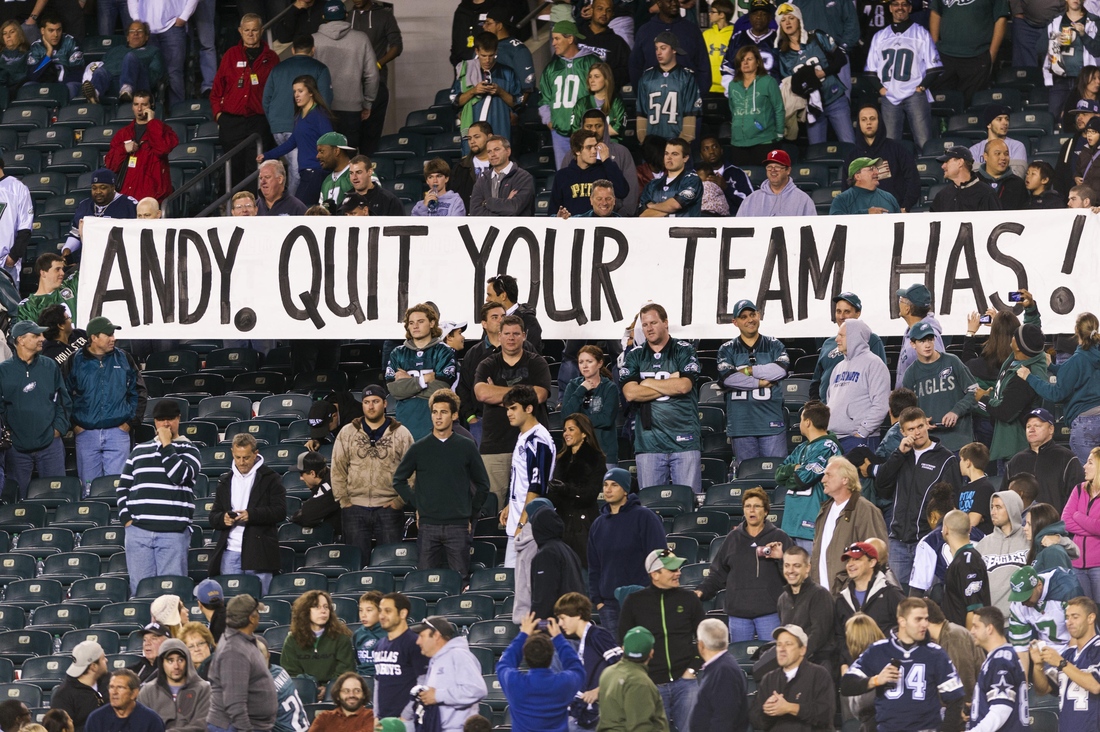 On defense, the players didn't do much of anything to refute Dominique Rodgers-Cromartie's claim that the rest of the league views them as a "pretty" unit with no interest in "hitting" anybody. I feel the need to nitpick a bit with that critique. You see, Eagles defenders love hitting, it's tackling that they shun. There's a significant difference between the two. Aside from being allergic to tackling, the defense set an NFL record for Swiss cheeseness by allowing a third straight quarterback to complete over 70% of his passes while throwing for at least two touchdowns and zero interceptions. Bravo, guys. Bravo. Of course the entire secondary, which had been a strength the first six games of the season, would collapse the moment its coach was elevated to defensive coordinator. It wasn't all bad, though. The defense settled down after a porous start and held Tony Romo and company to 17 points, while the pass rush started to show signs of life again. I haven't seen this mentioned, but Mychal Kendricks was brilliant in coverage against Jason Witten and the running backs. The main issue is that the unit has no legit playmakers, no one who can force turnovers or spur a swing in momentum. Nevertheless, I feel compelled to mention that Fletcher Cox had a tremendous game, even single-handedly stifling the Cowboys' first full possession of the second quarter. If only he could've corralled Romo on that fateful 3rd and 5 when the Gomer Pyle lookalike eluded every Eagles defensive lineman deep in the backfield before stepping up in the pocket and completing a 25-yard pass to Miles Austin. Three plays later came Dez Bryant's diving touchdown catch that hit the ground and shouldn't have counted, immediately followed by the coup de grâce that took all of 2:35 to transpire.

Finally, and most importantly, Sunday we witnessed the long-anticipated debut of Nick Foles, franchise savior (tongue, meet cheek). To whomever had Week 10 in the "When would Michael Vick suffer a serious injury?" pool, congratulations. Given the difficult circumstances, I thought Foles handled himself admirably and showed reasons for optimism, both from a tangible and intangible standpoint. He certainly didn't get any help from a coaching staff that abandoned an effective rushing attack and had him drop back 30+ times. As a passer, Foles already displays anticipation that Michael Vick could only dream of (see: the two passes when Jason Avant and Jeremy Maclin slipped coming out of their breaks). As a leader, he commanded the offense, made calls at the line, and interacted with his teammates on the sidelines. Was Foles lights out? No, not even close. There were certainly some terrible decisions and poor throws. He's a rookie, that's going to happen. What will be most telling is if he learns from those mistakes or repeats them. All I know is it looked like the Eagles finally had a quarterback playing that position instead of an athlete. I also found Foles' post-game comments refreshing and endearing. If nothing else, at least the Foles situation creates intrigue for what remains of another otherwise disappointing and disastrous season.

The rest of the season basically amounts to a trial run. Now we get to see if Foles can be the future at quarterback, or if the Eagles will have to look eslewhere for a solution in the offseason. This also means Andy Reid's short-term interests can no longer supersede the long-term interests of the franchise, which was an undeniable conflict. He's just lucky the decision was made for him. The Yahoo! report that states Andy will try to use Foles' potential progression during the last seven games of the season to save his job pisses me off to no end. As I tweeted yesterday, short of a miraculous 7-0 or 6-1 record with Foles that propels the Eagles to the playoffs, Andy does not deserve anymore chances, regardless of how good Foles might look. Just go away already and give me my team back. I want to enjoy the Eagles. I want to like them again. Andy Reid has made that impossible. 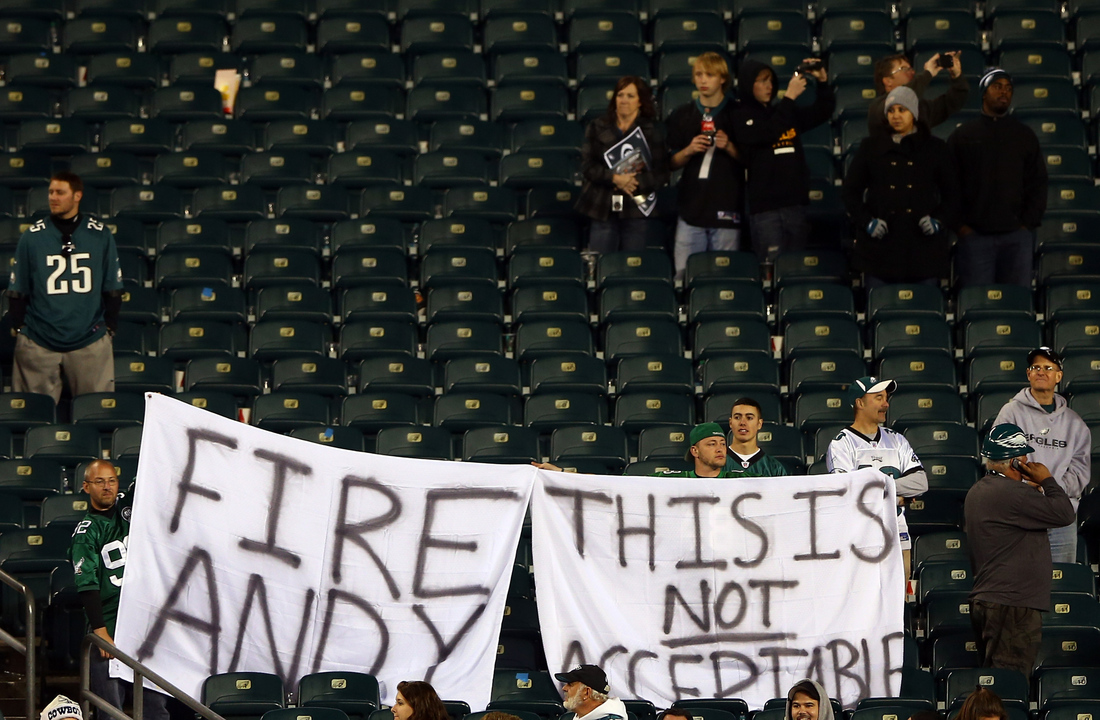 Among other things I'd like to see during the rest of the season: Increased playing time for Damaris Johnson and Riley Cooper. I've made my opinion on Damaris Johnson and his skills as a playmaker known in the past. He deserves more touches as part of the regular offense. Cooper fulfills a different role. The Eagles desperately need a big, physical target to play opposite DeSean Jackson. An "unbitch" receiver, as my dear friend Ari Lowell puts it. Someone who can go up and get the ball when it's in the air, someone who doesn't need a perfect throw to make the catch. Cooper is the only player on the roster who fits the bill and has serious ability, as he showed with his jaw-dropping touchdown catch against the Cowboys and in limited opportunities last season (see: second Giants game). I used to be very high on Maclin and thought he was a better pure receiver than Jackson, but I've soured on him this season. In addition to being afraid of contact, he is redundant in this offense and should be shopped for a trade before the draft.

Two weeks after losing for the first time post-bye, Andy Reid has now experienced his first five-game losing streak as Eagles head coach. Here's another upcoming first for him: Getting fired. It's not even the middle of November, but I'm already looking forward to the offseason and, PLEASE GOD, the beginning of a new era. Just make this insanity stop.