Vick Admits to Owning A Dog

Share All sharing options for: Vick Admits to Owning A Dog

Update: After refusing to comment yesterday on whether or not he owns a dog, Michael Vick has released a statement in which in confirmed he does in need have a family pet.

Here is the statement:

“I understand the strong emotions by some people about our family’s decision to care for a pet,” said Vick. ”As a father, it is important to make sure my children develop a healthy relationship with animals. I want to ensure that my children establish a loving bond and treat all of God’s creatures with kindness and respect. Our pet is well cared for and loved as a member of our family. This is an opportunity to break the cycle. To that end, I will continue to honor my commitment to animal welfare and be an instrument of positive change.”

In my opinion the statement was perfect- he admitted to having a pet, said why, and said he will continue to do his part in preventing abuse against animals.

As I said yesterday, I can't blame him for not admitting to it in the locker room- but I am glad he has come out and said he owns a dog. I honestly think it is a positive step for him, and it will good for the public to know he has completed his rehabilitation.

From Yesterday: Michael Vick has had to answer plenty of questions this week- about his fumbles, his overall play, and if this team can continue to win these close games.

What he didn't expect to have to answer, however, was a question about whether or not he owns a dog.

For those who missed it, last week Vick tweeted this picture of his daughter and him "doin' work." 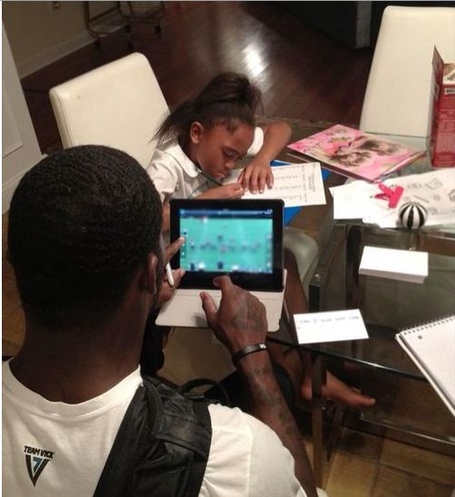 As you can see, there is pretty clearly a box of Milk Bones in the picture. Vick quickly deleted the picture and reposted it- with the box cut out. Unless Vick is eating Milk Bones to help him recover from the amount of hits he is taking, it's safe to assume based of the picture- and him deleting it- that he does indeed own a dog.

Vick was asked about the picture today, and declined to comment. Here was his exact quote according to Bob Grotz of DelcoTimes.com

"I'm here to strictly talk about football," Vick said. "What goes on in my personal life is not to be talked about. What's most important now is the Philadelphia Eagles and getting a win this Sunday."

Take from that what you will, but it seems pretty clear based off of the picture and Vick's response that he does indeed own a dog.

But what you need to ask yourself is- should we care? And if he does own one, should he tell us?

Should he tell us? The answer to that is less clear and really a matter of opinion.

From my personal experiences with Vick, I can tell you that he is the real deal. I have seen him speak at high schools, rec centers, and other events about his past. I once saw him speak at the Franklin Institute to a group of students. His honesty about what it was like to sit in a jail cell really got the kids attention. I remember first interviewing Vick at his locker, seeing a sticker hanging that said "Walk the Talk." He has done that since he arrived in Philly.

Maybe that is why his answer and refusal to comment on whether or not he owns a dog annoyed me.

Since Vick was released from jail, he has done tons to help combat dog fighting. He even spoke in Washington on the subject. Doing that kind of work went a long way in helping rehab his public image. Some will never forgive him for what he did, but by not running away from the subject and doing something about dog fighting, some were able to forgive Vick.

So for him now to say it "shouldn't be discussed" is not fair. Here is what Vick has said before about the potential of him owning a dog:

"I would love to get another dog in the future. I think it would be a big step for me in the rehabilitation process," Michael Vick said. "I miss having a dog right now. I wish I could. My daughters miss having one, and that's the hardest thing: Telling them that we can't have one because of my actions."

If that is the case, and he now owns a dog, why not tell people?

I saw the way the kids listened to him at the Franklin Institute, and I have seen the news cameras fight for a good shot when he has spoken on dog fighting in the past. He could do some good if he announced he owns a dog. Let people know how it is helping. Speak about it. Continue to use your public figure for good. Don't now run from it. For him to now act like his rehabilitation process regarding his dog fighting past is not our concern isn't fair.

What do you think you- should Vick tell us if he owns a dog? Should we care?

Detroit Lions at Philadelphia Eagles: Everything You Need To Know